Accessibility links
'Beaches Of Agnes' Fetes An Aging Queen Of Tides John Powers reviews a luminous cinematic memoir by the 81-year-old French director Agnes Varda. Like all Varda's films, The Beaches of Agnes brims with its creator's independence and vivacity. (Recommended) 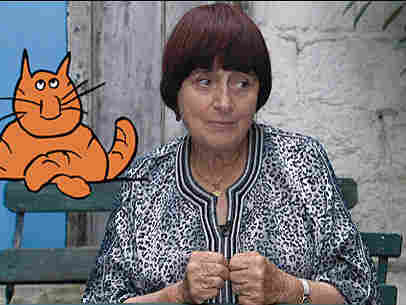 The Beaches of Agnes is not just a self-portrait of its director. Its supporting cast includes the people who matter to Varda — like filmmaker Chris Marker, who provides the voice for an animated orange cat. Cinema Guild hide caption 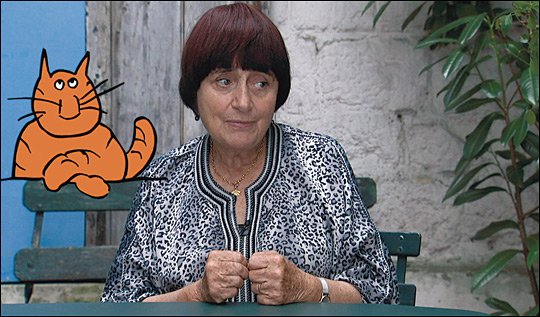 The Beaches of Agnes is not just a self-portrait of its director. Its supporting cast includes the people who matter to Varda — like filmmaker Chris Marker, who provides the voice for an animated orange cat.

The Beaches of Agnes

Some filmmakers, like Orson Welles and Jean-Luc Godard, instantly announce their greatness. With others, the greatness becomes clear when you look back over their career. Such is the case of Agnes Varda, the 81-year-old French director whose reputation just keeps growing.

So does her body of work: At an age when many of us would be happy just to be breathing, she's making some of the best and most original movies of her life.

Varda belongs to that astonishing era of French directors — Godard, Resnais, Rohmer, Truffaut, Marker, Chabrol, Rivette, Malle and Varda's own late husband, Jacques Demy — for whom cinema was almost a religious idea. This is a woman who's spent her whole life collecting images: It's her way of understanding the world. So it's only natural that when it came time to give us her autobiography, she'd do it on film.

The movie's called The Beaches of Agnes and it's a wonderful portrait of a full life — smart, touching, sometimes unabashedly silly, as when Varda dresses up as a potato. She sifts through the diverse elements of her life, from her birth in Brussels in 1928 through the self-inventing moment when she changed her name from Arlette to Agnes to her present day status as an octogenarian grandmother and cinematic icon.

Although few things could seem more narcissistic than an autobiography, Varda never slips into self-indulgence. She doesn't go all Mark Sanford on us, dishing up private details we don't really want to know.

Instead, Varda teaches us how to understand our lives. We start not with our inner feelings, but with the people and places that matter to us. That's why the film brims with generous portraits of the people who matter to her — the bakers next door, filmmaker Chris Marker, even her Hollywood pal Zalman King, the softcore impresario behind the cringeful Red Shoe Diaries.

She takes time to celebrate these people and many more, especially her beloved Demy, who made The Umbrellas of Cherbourg. Almost 20 years after his death, his name can still make her mist up.

Besides, such a gender-based designation locks her in a cinematic ghetto — the world of chick flicks and movies devoted to so-called "women's issues" like abortion and raising kids — something Varda has largely tried to avoid.

In 1977, she did make an overtly feminist feature, One Sings, the Other Doesn't, but frankly it was pretty sappy. It actually said less about women's lives than the more oblique Cleo from 5 to 7, about a pop singer waiting to hear whether she has cancer, and Vagabond, the fierce tale of a young female drifter who burns too hot for our chilly world.

Varda's deeply rooted feminism reveals itself mainly in her ferocious independence, in the way that she's always made the movies she's wanted to make, however personal or eccentric. As The Beaches of Agnes makes clear, Varda has a strong personality, and the result is one of the two best films currently in our theaters.

It's worth noting that the other one, The Hurt Locker, a brilliant drama about bomb-defusing soldiers in Iraq, was also directed by a world-class woman filmmaker, Kathryn Bigelow. She, like Varda, has followed her own interests, pointedly avoiding the female-film ghetto. Among other things, nobody is better at action sequences than Bigelow.

And nobody could be a better model for young filmmakers, female or male, than Varda. She began her career at 26 by daring to make a film about her home town — even though she knew almost nothing about movies — and she's ending her career enlivened by the same youthful curiosity about the world around her.

Near the beginning of The Beaches of Agnes, Varda tells us that she's "playing at being an old lady." Though she's kidding, she's actually right: At 81, the playful Varda remains one of the youngest filmmakers around.