Accessibility links
One Small Town's Big Role In The Apollo Missions More than 40 years ago, NASA sent the Apollo 11 astronauts to the small town of Flagstaff, Ariz., to prepare for their mission. The desert terrain and a meteor crater just east of town were much like what they would encounter on the moon. 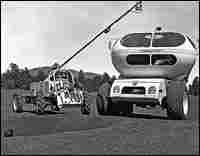 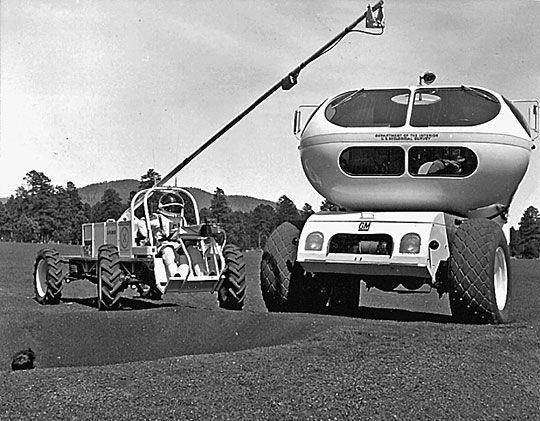 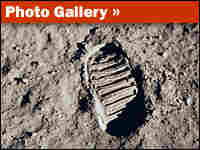 About 50 miles east of Flagstaff, Ariz., in the middle of a vast, flat, scrubby plain, there's an enormous rocky bowl in the ground — more than two and a half miles around and more than 500 feet deep. Meteor Crater was created 50,000 years ago when an asteroid smashed into Earth. It looks just like the craters on the moon.

That's why in 1963, NASA sent the three Apollo astronauts — Buzz Aldrin, Neil Armstrong and Michael Collins — to Flagstaff to start their training.

The U.S. Geological Survey documented the training with a series of films. In one of them, an astronaut picks his way across the rocky crater and collects samples with special lunar tools. Then he relays the data to another astronaut who waits in a tin model of the lunar landing module perched on the rim of the crater.

To re-create a sea of craters like what the astronauts would encounter on the moon, scientists in 1965 dug more than 400 holes. They calculated exactly how much dynamite and nitrate fertilizer to cram into the earth to create different-sized craters.

The area surrounding Flagstaff was the perfect location to re-create the moon's surface, says the narrator in one of the U.S. Geological Survey's movies from the 1960s.

"Near Flagstaff, Ariz., are fields of volcanic cinders, the result of eruptions about the year 1065. The cinders provided excellent material to re-create the lunar surface."

The result of this was an accurate replica of a section of the moon's Sea of Tranquility, where Apollo 11 landed.

Today, the crater field is a playground for motorbikes and ATVs. They kick up clouds of cinders as they cruise in and out of the craters. Forty years ago, NASA asked scientists in Flagstaff to build an early predecessor of these off-road vehicles — a replica of the lunar rover for astronauts to train on.

The 1960s lunar rover replicas are still in pretty good shape, says Jeff Johnson, who directs the USGS Astrogeology Science Center, founded in Flagstaff in the early 1960s. He stands in front of the rover, affectionately named Grover, which looks like a 1960s dune buggy.

"They were really trying to simulate what it was like to do a traverse on the surface of the moon, and I think it had to help, because we've seen this with all the missions: The more you can practice before the actual mission happens, the more prepared you are for when things go wrong," Johnson says.

And things did go wrong. On Apollo 17, one of the rover's fenders broke. The fenders were designed to keep lunar dust — fine like talcum powder — from blowing around the astronauts.

When it broke, the astronauts took one of the geologic maps of the moon's surface prepared in Flagstaff and stuck it to the broken fender with duct tape.

"That's been a joke for a long time," says Johnson. "The science and the maps was one thing, but the ability to fold it and make it into a fender was another."

The science that did come out of the Apollo missions was due in large part to Flagstaff's pioneering astrogeologists. They gave the astronauts crash courses in this brand new science.

Gerry Shaber is a retired astrogeologist; his mentor was the late Eugene Shoemaker, considered the father of astrogeology.

"We had to develop all new techniques of, how do you do geology on the moon," he explains. "That's what NASA was funding us for, because nobody knew that you could do it in a space suit."

Without Shoemaker, the Apollo 11 astronauts may never have taken their historic steps on the moon.

"We had a heck of a time actually convincing NASA to let them even pick up a rock on that first mission," says Shaber.

Shoemaker dreamed about studying the moon's surface years before the Apollo missions were even conceived. He never made it there — at least in life. But almost exactly 30 years after Apollo 11, some of Gene Shoemaker's ashes were scattered on the moon when the Lunar Prospector satellite fell to the surface.

He's still the only person who's a permanent part of the moon's geology.