Accessibility links
Fighting Racism Is A Family Tradition At 36, Benjamin Todd Jealous is the youngest president in the history of the 100-year-old NAACP. But he has a legacy to live up to in his own family when it comes to battling racism in America. 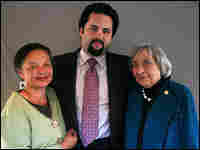 Benjamin Todd Jealous, between his mother and grandmother, is the youngest president of the NAACP, which is celebrating its 100th anniversary this week. Courtesy of StoryCorps hide caption 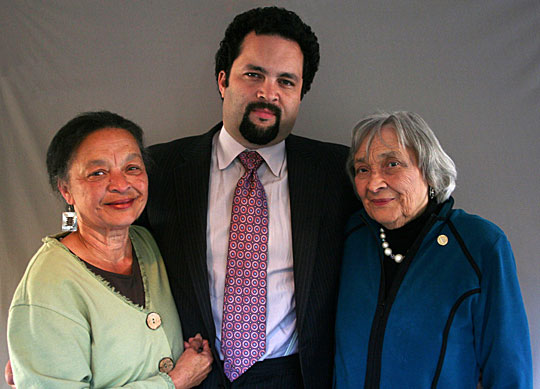 Benjamin Todd Jealous, between his mother and grandmother, is the youngest president of the NAACP, which is celebrating its 100th anniversary this week.

Benjamin Todd Jealous is the president and CEO of the NAACP, which is celebrating its 100th anniversary this week. At 36, he's the youngest leader in the organization's history. But he has a legacy to live up to in his own family when it comes to battling this country's color line. His grandmother, Mamie Todd, and his mother, Ann Todd Jealous, blazed their own paths ahead of him.

In the 1930s, Mamie taught at an all-black school in Virginia, and her students lacked basic school materials like pencils and paper.

She'd had enough, so she took her case to the white superintendent of schools.

"I went up to the secretary's desk and said, 'I have an appointment.' And she said, 'Well, the colored teachers come around the back,' " Mamie recalls.

Mamie sat down in a neaby chair. "He was a human being; I knew we had that much in common," she says. So she told him what her school needed.

The next day, a truck arrived at the school "laden with materials."

"I had everything I could think of that I told him that school needed," she says.

Years later, Mamie's only child, Ann, was among the first group of black students at an all-white high school. On the first day, Ann went to claim her assigned seat, but another girl was sitting there. When she told the girl that it was her seat, Ann says, "she fell onto the floor, she was so terrified."

"The rumor was that we all carried knives, and she was afraid that I would stick a knife in her for sitting in her seat," she says.

Mamie says it was difficult to watch Ann at the school, but she knows her daughter kept a lot to herself.

Ann agrees, "I did not want to burden them. ... I was very, very conscious of the great deal that [my parents] carried as a consequence of racism, so I kept as much as I could to myself."

"There's a lot left to be done," Mamie tells her grandson.