Accessibility links
Hot Climates May Create Sluggish Economies New research suggests that poor countries experience significantly slower economic growth in years when the thermometer soars. Economists are studying why poorer economies of the world tend to be in hot places.

A Cambodian boy gets some relief from a hot day in Phnom Penh by getting wet. Some new research shows that countries like Cambodia with high temperatures are more likely to have slower economic growth. Philippe Lopez/AFP/Getty Images hide caption 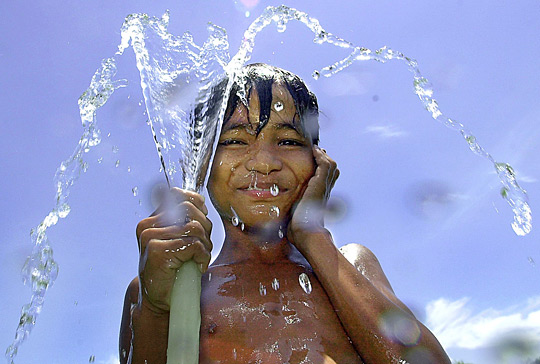 A Cambodian boy gets some relief from a hot day in Phnom Penh by getting wet. Some new research shows that countries like Cambodia with high temperatures are more likely to have slower economic growth.

The research adds to an economic puzzle that dates back hundreds of years: Why do the poorer economies of the world tend to be in hot places, while the more successful economies are found in cooler climates?

The French writer Montesquieu wondered about it in the 1700s. Now there is significantly more data to work with. A graph of per-capita GDP and average temperature shows rich countries at one end — Norway, Germany, France and the U.S. — and poverty at the other end in Cambodia, Liberia and Congo.

Many researchers have written this off as a historical accident, perhaps a legacy of colonialism.

Ben Olken, an associate professor of economics at MIT, and his colleagues wanted to examine the temperature connection more closely. They decided that instead of comparing one country to another, they would look within countries. Did a hot year mean slower economic growth?

The answer appears to be yes. They found that for poor countries, an increase in annual average temperature by 1 degree centigrade corresponded to a 1.1 percent drop in per-capita gross domestic product.

It's "a huge effect," Olken says. The difference between a country that's in recession and one that is buzzing along amounts to a 3 percent shift in GDP. "So, 1 degree explaining a 1.1 percent shift is a huge effect of temperature."

It's unclear exactly why temperature would have this effect. It might be that crop yields go down, or that disease is more of a problem. Or it might just be what you could call the "sloth" theory — it's hard to work when it's hot out. Who wants to mow the lawn in August?

"This stuff is not implausible," Olken says, "If you look back at the U.S. before the advent of air conditioning, there were times when the federal government would shut down. It was too hot out."

The researchers found that temperature shifts did not appear to affect the wealthier countries, perhaps because of air conditioning, or because they already are situated in cooler climates.

The results suggest that global warming could increase the gap between rich and poor.

"One of the takeaways I have from this paper is it seems like the economic impacts of increased temperature in poor countries are going to be very severe," Olken says.

William Easterly, an economist at New York University, says the new study is fascinating, but he's not convinced.

"It's way too soon to take one statistical finding and say we have solved a 500-year-old problem of why temperature and per-capita income are associated with each other," Easterly says.

Easterly says he thinks cooler countries have stronger economies because of a historical accident. "It was Europeans who discovered first how to set up a prosperous market economy," he says. Europeans spread to other temperate parts of the world. That explains why the rich economies are there today.

Why didn't the hotter parts of the world catch up? "When you're ahead, you tend to stay ahead," Easterly says. The slave trade was one example of how that played out. "Europe and America benefited from the profits of the slave trade. And Africa was permanently harmed by the slave trade."

Olken says his team has checked and rechecked its results with a number of data sets. He says the temperature and GDP correlations keep showing up.

Whatever the cause, there are some countries that buck the trend. Singapore is just about on the equator and has a strong economy. Indonesia is growing fast.

Easterly says the great hope of global trade is that countries can adapt to do whatever makes sense in their part of the world. With time, they can overcome climate, even history.