Accessibility links
TB Bug Slow to Replicate This week's bizarre news of a transatlantic traveler with tuberculosis raised questions about the microbe that causes the disease. In our regular segment "Science Out of the Box," Dr. Richard Chaisson of Johns Hopkins University explains that the TB bacterium is very slow to replicate, and this slows diagnosis, treatment and research.

This week's bizarre news of a transatlantic traveler with tuberculosis raised questions about the microbe that causes the disease. In our regular segment "Science Out of the Box," Dr. Richard Chaisson of Johns Hopkins University explains that the TB bacterium is very slow to replicate, and this slows diagnosis, treatment and research. 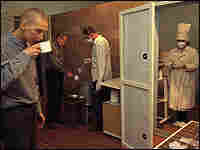 Sick with tuberculosis, inmates at a Siberian prison wash down their medicine with milk while a masked nurse monitors them. Karen Kasmauski/Corbis hide caption 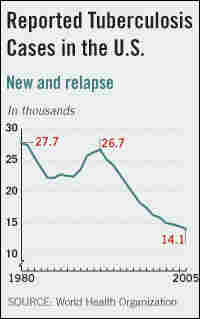 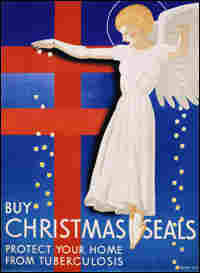 Until German physician Robert Koch first identified the bacteria behind tuberculosis in 1882, the often fatal, wasting disease of the chest was known simply as consumption or the white plague. Even after Koch found the disease's cause, doctors could do little for patients beyond keeping them well-nourished and in a clean environment. A cure remained another half-century away, with the discovery of an effective antibiotic in the mid-1940s.

Today, treatments for tuberculosis are threatened by the emergence of strains of the disease resistant to multiple lines of drugs. In a first since 1963, federal public health officials this month ordered a quarantine for Andrew Speaker, a 31-year-old Atlanta lawyer, who has been diagnosed with an extremely drug-resistant form of the disease. The patient currently is at the National Jewish Medical Research Center in Denver for treatment.

Such hard-to-cure strains are rare in the United States, but are gaining a foothold in countries like Russia and South Africa.

Here, a look at the state of TB in the United States and around the world:

Isn't tuberculosis a disease of the past?

TB is indeed ancient – it has been around at least since the pharaohs. Some scientists suggest it has been living with the human species for 3 million years. But it's also very much a disease of the present. It remains widespread around the world, with one in three people infected, according to the World Health Organization. But 90 percent of people infected with the germ never develop the disease. The bacteria are usually held in check by the immune system. The infection is more likely to develop into a disease when a person's immune system is compromised, for instance, due to HIV, other illnesses or aging.

How is TB spread?

People with TB disease can spread the bacteria through coughing, sneezing or simply talking. But infection usually happens only after prolonged exposure, according to Dr. Martin Cetron, director of the global migration and quarantine division at the Centers of Disease Control and Prevention.

"By and large, TB is spread through prolonged contact. This is not the type of pathogen that is transmitted by short, casual contact," Cetron said.

Only 10 percent of those infected with the germ go on to develop the disease.

Drug-resistant TB is not more infectious than other forms of TB. But repeated exposure to large concentrations of infected people – such as happens in prisons, overcrowded houses and hospitals – can increase a person's chance of infection. An immune system weakened by disease or even certain types of medication can also increase a person's risk of developing full-blown TB.

A person also becomes less infectious after the first week of treatment.

How widespread is TB in the United States?

TB has been on the decline here for decades, with the number of cases in 2006 – 13,767 – at an all-time low since national reporting began in 1953. But the rate of decline has slowed, a point of concern to public health officials, given the rise of TB strains resistant to multiple drugs.

How widespread is TB globally?

If treatments exist, why is TB still such a problem?

Access to treatment and diagnosis in poorer countries is an ongoing obstacle. The HIV pandemic also complicates attempts to eradicate TB: The AIDS virus, which attacks the immune system, increases the likelihood that a TB infection will become a full-blown disease. HIV is considered the single most important factor in the increase of TB in Africa since 1990. Emerging drug-resistant strains of TB are also hampering efforts to stamp out both diseases.

What is drug-resistant TB?

MDR-TB, or multidrug-resistant TB, is a form of the TB bacteria that is resistant to two of the most powerful TB drugs – isoniazid and rifampsicin. When these so-called first line drugs don't work, doctors resort to a second line of drugs. But these aren't as fast-acting, cause more side effects and are more expensive. One U.S. case of drug-resistant TB last year cost nearly $500,000 to treat.

The CDC doesn't have a confirmed outcome on eight of the 49 patients who had XDR TB. Among the other 41 patients, 12 people died. At least 10 of those who died were HIV positive.

About 30 percent of cases can be cured, according to the CDC. The severity of the disease, underlying medical conditions and a physician's access to treatment options all factor into a patient's ability to be cured.

TB that is resistant to nearly forms of drugs (XDR-TB) is rare. But in 2004, there were an estimated half a million cases globally of TB resistant to some drugs. Multidrug-resistant TB remains rare in the United States; the CDC recorded 124 cases out of more than 13,000 TB infections in 2005.

How does TB become drug resistant?

Resistance to antibiotics happens in two ways – a person either is infected with a resistant strain, or during treatment, the bacteria mutate or pickup resistance genes from other organisms. For most strains of the disease, the CDC recommends a course of drugs over a six- to nine-month period. (For multidrug-resistant strains, treatment can take up to two years.) If the drugs aren't taken precisely as prescribed, that could give the bacteria a window of opportunity to become resistant. This can be a serious problem in developing countries, where those infected may not have access to medical care.

A skin test can detect whether a person has TB even before the full-blown disease appears. Symptoms are the same for normal TB as XDR-TB. Among the signs: a cough with thick, cloudy mucus, sometimes with blood, for more than two weeks; fever, chills and night sweats; fatigue, muscle weakness and weight loss.