Accessibility links
You Sexy Beast: Our Fascination With Werewolves In books, in movies, even in the U.S. Senate, there is much talk about "werecreatures" — half-human, half-beast. What does this fascination say about the human heart?

You Sexy Beast: Our Fascination With Werewolves

You Sexy Beast: Our Fascination With Werewolves 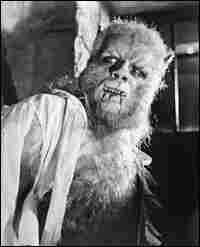 Actor Oliver Reed in the 1961 release of The Curse of the Werewolf. NBCU Photo Bank hide caption 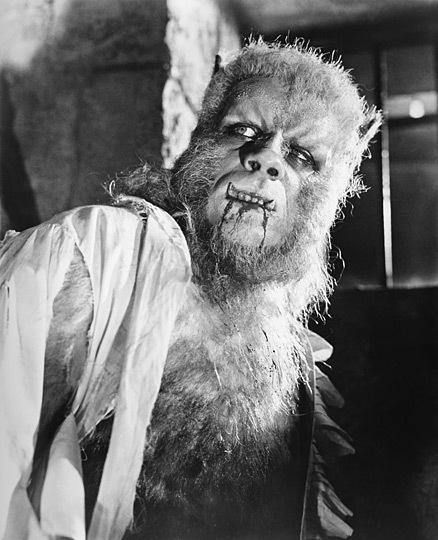 Actor Oliver Reed in the 1961 release of The Curse of the Werewolf.

Werethings are showing up everywhere. There's The Wolfman movie in the works starring Benicio Del Toro. And word of a remake of John Landis' 1981 movie An American Werewolf in London. A new series on BBC America premiering in July features a weresomething-or-other.

Even the United States Senate is worrying about werecreatures. More on that in a sec.

But first: Where in the world is this wereness weirdness coming from?

Charlotte Otten, author of A Lycanthropy Reader and The Literary Werewolf, attributes the present pop-cult fascination with werethings to "our continuing interest in metamorphosis."

A professor emerita at Calvin College in Grand Rapids, Mich., Otten says that some of the struggles in the history of metamorphosis can be traced to "uncertainty about the nature of a human being and his/her relationship to the animal kingdom."

In werecreatures, she says, "ultimately, we find ambiguities and mysteries."

Werefiction provides readers with much-needed escapism, says Leila Taylor, co-owner of Creatures 'n Crooks Bookshoppe in Richmond, Va.: "People are wanting to read something that doesn't make them depressed and that has a little excitement in it."

And, she adds, "When it comes to the whole werewolves, werecats, werepanthers thing, people are getting tired of the vampire scene."

The idea of shape-shifting and man-beast combos dates at least as far back as the ancient Greeks and Romans, whose myths abounded with humans morphing into animals, then back again. The most famous example is the werewolf, a half-human, half-wolf concoction.

In the past there have been reports of real, live "wolfman" sightings. For the most part today, wolfmanism, or lycanthropy, is considered to be a delusional disorder.

For example, Otten says that a couple of decades ago, a psychiatrist "encountered a man in a three-piece suit who was on all-fours, barking like a dog."

It took several months to convince the barking man that he was not a dog, she says. "He found a pleasant escape in the form — an escape from an exhausting business life."

And, she says, "I had a student some years ago who abandoned human society and set himself up to live outdoors. When he came to see me one day, I didn't recognize him. His facial hair almost covered his entire face, and he had an animal smell."

Werecreatures crawl in and out of popular culture in cyclical faddish fashion.

The word "werewolf" is believed to be an ancient amalgam of the Old English "wer," meaning "a man," and "wolf."

For ages, European folktales have contained threads of bloodthirsty, superstrong, highly sensitized werewolves, often controlled by the Devil. In the stories, men transmogrified into hairy creatures either at will or under the spell of some external force, such as a full moon.

Writing in the 2006 book The Curse of the Werewolf: Fantasy, Horror and the Beast Within, Chantal Bourgault du Coudray points out that the werewolf has a longstanding documentary history: In the sweeping poem "Metamorphoses," Ovid tells the tale of Zeus turning a king into a wolf. In "Satyricon," written by the 1st century Roman writer Petronius Arbiter, one man watches another turn into a fur-covered beast. By the 7th century, scholars were documenting a medical disease in which patients believed they were wolves.

In the early part of the 19th century, du Coudray argues, interest in werecreatures emerges as a romantic response to the anti-superstitious lessons of the Enlightenment.

She writes, "While the reality of lycanthropy was defended in several accounts dating from the medieval and early modern periods, the nineteenth century understanding of biology and physics precluded the possibility that the transformation of a human into a wolf was possible."

That impossibility did not end the fascination.

In the 20th century, popular literature and films kept the stories alive. One of the most famous horror movies is the 1941 The Wolf Man, starring Lon Chaney, Jr. Scads of other films and books followed. Jack Nicholson played a werewolf; so did Michael Landon and Michael J. Fox.

Today the Twilight series by Stephanie Meyer and the True Blood series by Charlaine Harris contain creatively crafted werecreatures, along with vampires and other monstrous beings.

So where does this present obsession stem from? You could blame Harry Potter, who had a wolfish professor named Remus Lupin. You could point to the Internet, which teems with fan-fiction sagas of shape-shifting and wolfen Web sites devoted to the worship of werecreatures.

Maybe it's just the natural (unnatural?) progression of American culture's preoccupation with vampires and zombies. Or perhaps, as Charlotte Otten suggests, this fascination with human paw-tential springs from new biotechnology that might finally make the impossible possible.

The genetic alteration of plants and animals has become a hot-button issue. This week, the Human-Animal Hybrid Prohibition Act, a bill that would prohibit the laboratory creation of human-animal hybrids, was introduced into the U.S. Senate by Sen. Sam Brownback, a Republican from Kansas, and Sen. Mary Landrieu, a Democrat from Louisiana.

"Creating human-animal hybrids, which permanently alter the genetic makeup of an organism, will challenge the very definition of what it means to be human and is a violation of human dignity and a grave injustice," Brownback said in a statement.

"Cloning — in all its delicate and precarious aspects — is like a jab to the thought process," Otten says. "It raises all the fundamental issues about human life that have been raised for centuries."

And now that there's discussion, in real life as well as fiction, of "reproducing human life through 'mechanical' means," she says, "it creates anxiety in the hearts of human beings."