Accessibility links
Exclusive First Listen: Lightning Dust In the two years since releasing its spare and mostly gloomy self-titled debut, Lightning Dust has somehow found happiness, or at least what passes for it in the strange netherworld it inhabits. The new Infinite Light, which you can hear here in its entirety two weeks before its release, illuminates the dark corridors of the duo's earlier work.

Hear The Band's New Album, 'Infinite Light,' In Its Entirety 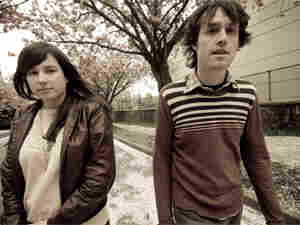 Audio for this feature is no longer available. The album was released on August 4, 2009.

In the two years since releasing their spare and mostly gloomy self-titled debut, Amber Webber and Joshua Wells — the duo known as Lightning Dust — have somehow found happiness, or at least what passes for it in the strange netherworld they inhabit. Their latest album, Infinite Light (which you can hear in its entirety here, two weeks before its release), illuminates the dark corridors of the duo's earlier work with uplifting, if mysterious, songs of love and all we do to find and hold on to it.

Webber and Wells got their start playing together in the neo-psychedelic folk-rock group Black Mountain, a Canadian band known for channeling acts like Led Zeppelin, complete with electrified riffs and aggressive beats. When Webber and Wells decided to strike out on their own in 2007, they stripped their sound down to the barest elements and got in touch with their inner demons. The duo's initial batch of songs were moody, and at times even haunting. But for Lightning Dust's sophomore release, Webber and Wells opted for a slightly brighter, richer tone.

"It maintains the feeling of space that we've always tried to make the primary facet of our music, while introducing more diverse, and sometimes denser arrangements," Wells says. "This record utilizes a rhythm section more than our first, as well as some strings. We've always intended to heighten the dramatic tension in our music, and we've simply used a broader palette here."

But even with more orchestrated songs of love and hope, Infinite Light remains somewhat elusive, with a sound that belongs, unmistakably, to Lightning Dust. The arrangements take on pop forms, but the instrumentation still feels remote and detached from the world. Webber's voice, always the band's most compelling element, still sounds anguished.

"It's sort of hard to speak to any one thing or emotion that made these particular songs happen," Wells says. "Suffice it to say that the two years in between the self-titled record and Infinite Light were some of the strangest, luckiest, most up-and-down, well-travelled, confusing years we've had on earth."