Accessibility links
Meat Puppets Return From A Decade Of Turmoil The Meat Puppets, a punk rock band led by brothers Cris and Curt Kirkwood, played with Nirvana on MTV Unplugged in 1994, and released the hit single "Backwater" the next year. Two years later, Cris plunged into a decade of heroin addiction, and the band fell apart. Now the Kirkwoods are back with Sewn Together, the band's second album since Cris' return. 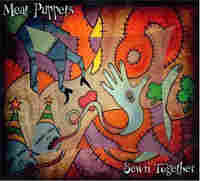 Sewn Together is the latest release from Meat Puppets. Courtesy of the artist hide caption 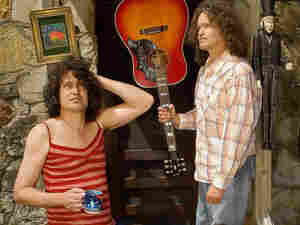 Brothers Cris and Curt Kirkwood left their high society life in Phoenix, Ariz., to form the Meat Puppets in 1980. Courtesy of the artist hide caption

The Meat Puppets were never your average punk band. They listened to Neil Young — in the 70s.

"It's one of the reasons we weren't entirely accepted by the punk-rock scene," says Cris Kirkwood, who started the band with his brother Curt. The Kirkwoods also didn't fit in because punk rock was a working-class movement, sneering at the glam-rock excesses of the 1970s, while the Kirkwood brothers' upbringing in Phoenix, Ariz., was decidedly upper-crust.

"My mom was the child of a person that was the kind of rich that people don't even dream of," Curt says. "So we grew up around Lear jets and hotels and all this crazy stuff: mansions all over the place."

In 1980, the brothers left high society and started The Meat Puppets with drummer Derrick Bostrom. They were signed to SST Records along with punk bands Black Flag, the Minutemen and Husker Du. After The Meat Puppets spent more than a decade on college radio, Kurt Cobain invited the band on a tour with Nirvana, and to appear on MTV Unplugged. Soon afterward, the Kirkwoods scored a hit with "Backwater," from their commercial breakthrough album, Too High to Die.

A Decade of Turmoil

That's when Cris began his struggles with alcoholism and heroin. By the next year, his heroin use was out of control, and his life started to unravel. In 1996, Cris' and Curt's mother died, and in 1998 Cris' wife died of an overdose.

Cris says he ballooned to 300 pounds and lost all his teeth. Then, in 2003, he was shot after assaulting a security guard in a post office parking lot. He went to prison for a year and a half, which finally cleaned him up. A year after he got out, the Kirkwoods were back together, releasing music after more than a decade away from the industry.

The Road to Recovery

"It was pretty amazing when Curt called me, the timing and everything," Cris says. "I actually had managed to turn the corner ... having wrecked my career, having ruined my relationship with everybody that loved me and who I loved."

Curt says he's not bitter about the fact that Cris disappeared into heroin right as the band had its chance to break through.

"I mean, having money and fame and all that stuff, they don't say it's hollow for nothing," Curt says. "At the peak of their popularity, when things should be the best for them, everybody's bummed out, especially in punk rock or rock 'n' roll. It's not just punk rock. The beautiful people all choked on their vomit, too."

Fortunately for The Meat Puppets and their fans, Cris Kirkwood didn't.