Accessibility links
In Argentina, Pepsi Logo Acquires Local Flavor When people in Buenos Aires are thirsty for the American soda, they have long ordered something they call "Pecsi." Not "Pepsi." The idiosyncratic pronunciation has become the focus of a Pepsi ad campaign. 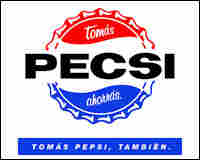 Capitulating to the Buenos Aires pronunciation of its product's name, Pepsi has created an ad campaign specifically for the city: "You drink Pecsi, you save money. (You drink Pepsi, you save, too.)" hide caption 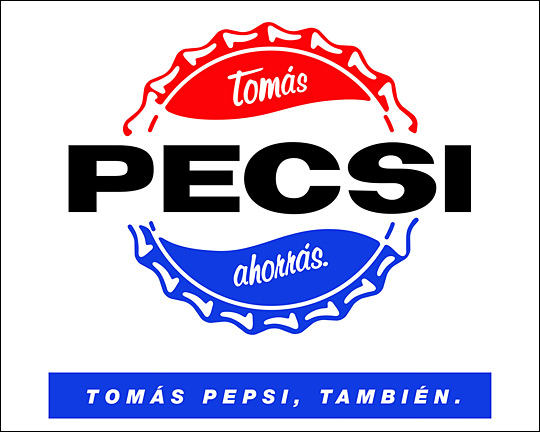 Capitulating to the Buenos Aires pronunciation of its product's name, Pepsi has created an ad campaign specifically for the city: "You drink Pecsi, you save money. (You drink Pepsi, you save, too.)"

Billboards have gone up in the past few days in Buenos Aires, Argentina, with the familiar red, white and blue Pepsi logo, but under it is the word "Pecsi."

It's a classic case of if you can't beat 'em, join 'em: Pepsi has decided that because people in Buenos Aires have been ordering "Pecsi" at refreshment stands for decades, there's no real point in fighting them. On some billboards, under the word "Pecsi," are Spanish words that mean "freedom of expression" or "freedom of pronunciation."

That's a freedom that folks in Buenos Aires take seriously. Portenos, as they're known, have been pronouncing things unlike the rest of the world — even the rest of the Spanish-speaking world — for ages. For instance, y and ll, pronounced "yuh" from Spain to Mexico, are pronounced "sshhh" here. This writer's last name, for instance, is apt to come out "Mondesshho."

So "Pecsi" it has been, and now Pepsi Co. seems to be saying, "Hey, call us anything you like — just drink it." Actually, Coke has a product that could have tried this same campaign: When people in Buenos Aires say "Sprite," they drop both the s sound at the beginning of the word and the t sound at the end, so the word comes out "Pri."

Spanish is a consistent language in terms of pronunciation, and that leads to some mispronunciations, too. Folks here, having learned that the "e" in the English words "like" and "strike" is silent, mostly assume that one famous shoe company's "e" is also silent.

So, if you say you want some "Nikes" (rhymes with "bikes"), people send you to a shoe store. If you want a bubbly beverage, ask, as always, for "Pecsi" — unless, of course, you prefer "Pri."