Accessibility links
Military Chefs Battle On Pentagon's Cooking Show Every week, you can catch some of the military's best chefs on The Grill Sergeants, the Pentagon Channel's cooking show. Brad Turner, the original "Grill Sergeant," is shooting new episodes focused on cuisine from different countries. 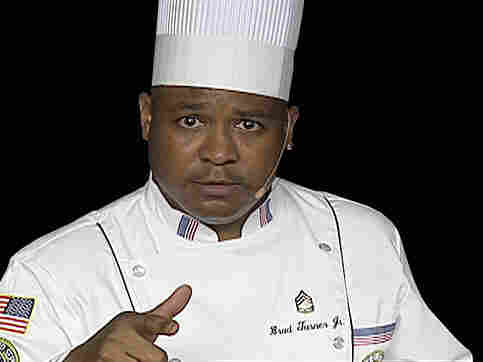 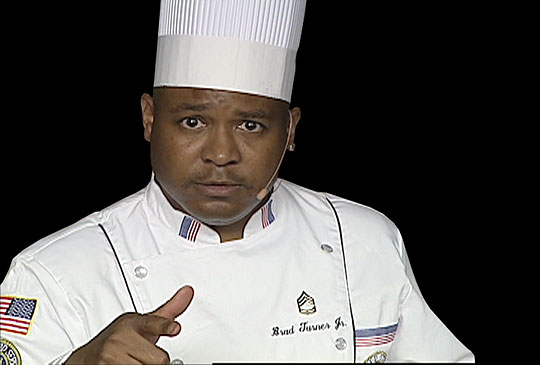 Courtesy of The Pentagon Channel

Among the Defense Department's many responsibilities — fighting two wars, looking out for 3 million employees, and so forth — is producing a weekly cooking show.

Every week, on the Pentagon Channel, the military's best chefs battle it out on The Grill Sergeants.

Sgt. First Class Brad Turner is the original grill sergeant and the star of the show.

He is presiding over a set featuring an impressive grill, big brass pots and two sets of burners.

They're filming these episodes in the teaching theater of the Culinary Institute of America in Hyde Park, N.Y. This is the third season of The Grill Sergeants, which is broadcast to troops around the world on the American Forces Network, and here in the states on the Pentagon Channel.

All the chefs on the show are active-duty military. Some are mess hall cooks. Some are aides to generals.

The eight new episodes they are filming for the fall season are focused on a different country's cuisine. On a recent day, they were cooking Indian, Korean and Mexican cuisines.

Past seasons in the show have featured more military themes. One episode cast a Navy cook whipping up "Admiral's Faves." That was seared ahi tuni and lamb with blueberry wine sauce.

Brian Kumia, the show's executive producer, explains why the Department of Defense is producing a cooking show.

"The Pentagon Channel, it's not just briefings and hearings. It's lifestyle programming. So we have fitness programs and cooking is a very palatable thing for our audience," he explains.

Turner grew up in New Orleans' Lower Ninth Ward. He remains partial to a good cup of gumbo. But he didn't learn how to cook until he was enlisted.

Turner was taught basic cooking and baking at Fort Dix, N.J. And then at age 19, he shipped out to Korea, where he learned to feed a lot of hungry soldiers.

"When you open up, there are 300 people waiting to eat," he says. "You learn! You learn how to work, how to cook. I often say that cooks have a no-fail mission, three times a day. I don't know about any other military job. But our job? We are in a real mission everyday."

And that is the philosophy that's carried him through his military career so far.

"I do care about what I put out," he says. "Whether I'm doing soup for 1,100 infantry soldiers on maneuvers in Hornfields, Germany or baking biscuits for my engineer unit at four o'clock in the morning. And they pop open a box and there's some hot biscuits in there. I'm telling you, you get a lot of love back from some soldiers when you send 'em some hot biscuits and stuff in the field."

Turner was serving at Fort Lee, Va., when Pentagon Channel producers approached him two years ago, about a new show.

They shot that first season at Fort Lee, and since then, they've filmed across the country.

Show producer Linda Dodich says it is no small feat, trucking everything from TV cameras and a mobile control room, to sous-chefs and the band — all to a new set. Among this shoot's particular challenges: rancid meat and a flat tire.

But the producers say all the snags eventually sort themselves out, and at last, when the chef and the band and the food all come together, they make a show that sings.

1. Stir together couscous and boiling water in a large, heatproof bowl. Cover with plastic wrap, and set aside for 10 minutes.

2. Meanwhile, heat olive oil in a skillet over medium heat. Stir in onions and garlic, and cook until the onion has softened and turned translucent, about 5 minutes. Add the diced Roma tomatoes, and cook until the tomatoes release their juice and the mixture begins to thicken.

3. Fluff the couscous with a fork, then fold in the tomato mixture and cheese. Serve immediately as the cheese is melting.

4. Grill on a charcoal grill until done, approximately 20 minutes. Check after 15 minutes.

Base recipe found on ALLRECIPES.COM

1. Mix all the ingredients together in a large bowl.

2. Wash the chicken and pat it dry.

3. Marinate the chicken in the yogurt mix for 30 minutes

4. Grill the chicken on a charcoal grill until it's done, approximately 20 minutes. Check after 15 minutes.

Base recipe found on ALLRECIPES.COM