Accessibility links
Aldrin Reflects On Life After Moon Mission Forty years after walking on the moon, Edwin E. "Buzz" Aldrin talks with NPR about preparing for the Apollo 11 mission, and how his life has changed since splashing down back on Earth. 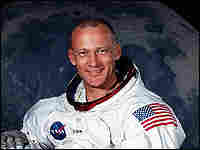 Edwin E. "Buzz" Aldrin, the second man to step foot on the moon, has faced personal obstacles ever since returning from the mission. July 20 marks 40 years since Apollo 11 landed on the moon. NASA Human Spaceflight Collection hide caption 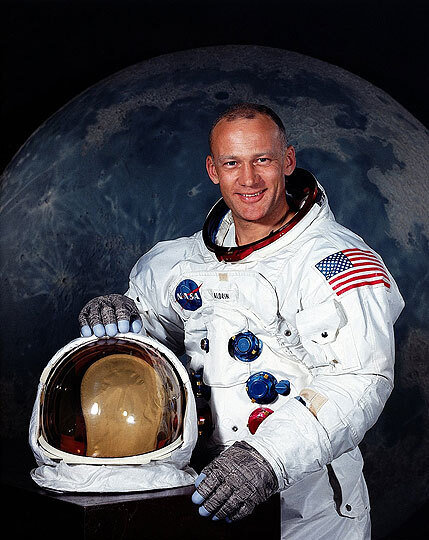 Edwin E. "Buzz" Aldrin, the second man to step foot on the moon, has faced personal obstacles ever since returning from the mission. July 20 marks 40 years since Apollo 11 landed on the moon.

Additional Excerpts: Aldrin discusses NASA after the moon missions and travel to Mars

Forty years after walking on the moon, Edwin E. "Buzz" Aldrin sits down with Steve Inskeep to talk about preparing for the Apollo 11 mission, and how his life has changed since splashing down back on Earth.

NPR's Steve Inskeep: What does it feel like to get asked for 40 years what it feels like to step on the moon?

I, along with mankind, achieved a pinnacle of magnificence of advancement of humanity to come down from the trees. We came down from the trees. We came out of the caves. We rubbed two sticks together. We made wheels. We had an automobile. Then we decided that we could fly like a bird. We dreamed of things up in the sky that were mysterious, mythical things, and we challenged ourselves to put a human on the moon.

What a bodacious challenge confronting people on the surface of the Earth. And as a result of that challenge, two guys managed to walk on the surface. That's magnificent.

That summary of human history, that must have been quite an awesome thing to have on your mind in the few years before the Apollo 11 mission. Feeling that in some ways, all of human progress was pointing to that moment and it was going to fall down to you and Neil Armstrong to take the next step.

Yeah. We were rather confident that unless something went wrong that we hadn't trained on, that we'd be able to carry out the mission, but we were just not positioning ourselves as a point in history.

You weren't thinking about it as history at that point?

Why would we be doing that before we go there? You just get over-awed, you set up a series of expectations, and you're bound to get disappointed one way or the other. Neil didn't even think of the words he was going to say on stepping on the moon until we were well into the mission. We were obsessed with doing the best that we possibly could so that we wouldn't be premature, celebrating, jumping up and down, and while doing that, trip over the wire that goes out to the TV camera that's recording all that we're doing. You can do some silly, clumsy things if you're daydreaming, or thinking of things premature.

Well, what happened then when that capsule came back to Earth and splashed down in the ocean and you guys were picked up and taken around to great parades and great celebrations and then some time passed? What happened then, when it quieted down for you?

Well, that was the unattractive portion of being on the first landing. All three of us decided not to participate in the crew rotation after Apollo 11. My inclination was to return back to the Air Force that I came from and be the commander of the cadets at the Air Force Academy. The Air Force already had somebody in mind and so I decided to retire, and I was left, for the first time, with a very unstructured life, and frankly, things began to come apart.

My mother, I think you know took her life a year before I went to the moon, I had inherited tendencies for addictive substances — alcoholism — and clearly that began to predominate in my unstructured life. I thrived on the assignment to be involved in mission planning to cover most of the eventualities in Apollo, so that we could return to Earth safely. And I was left without goals to pursue, without a team to work with, and I had to begin recovery from that. That's a long process, and it's a process that has you make changes in your life, but I went through the magnificence of Apollo to the desolation of recovery and I want to share those things with the rest of the world.

I'm fascinated to you say that you loved helping to plan Apollo missions and to figure out everything that possibly could go wrong and then plan how to get out of it or make sure it doesn't go wrong at all. Because it sounds like it may have been more difficult just to plan one human life than it was to plan that mission to the moon, at least for you.

It certainly was, because you've been making decisions and you think, 'I know what to do best, and I'll just take a little deviation here, have a little fun here, escape here,' and pretty soon that becomes a pattern of life, a pattern of existence and you begin to be robbed of the ability to appropriately mix and mingle and socialize properly with people. And I see that every day in the fellowship of recovery, of people that transition through that. Fortunately we didn't have all the drugs back in those days and I wasn't tempted in that direction. I realize that my life is not the common ordinary person.

You definitely could not go to a career counselor who could say that, 'well, the normal career path for people who are the first on the moon is ...' I mean there's no way to complete that sentence. You were in an unusual situation to say the least.

And I didn't know what I could do, so I shared my experiences by writing an autobiography. It was not Journey to the Moon it was Return to Earth because that's what was difficult for me.

And I have a magnificent potential life now, potential impact to make a difference. My expertise is the space program and what it should be in the future based on my experience of looking at the transitions that we've made between pre-Sputnik days and getting to the moon. That was pretty smooth, pretty, pretty magnificent in everything that we did. I am just enjoying thoroughly right now, and in the last several months, working out missions to put humans on Mars. We need a critical mass of people on the surface of Mars. The people who came over on the Mayflower, didn't hang around Plymouth Rock looking for the return trip. This is one of the most significant historical migrations that could ever take place.