Accessibility links
A Single Wing Starts Quest For Mystery Bird Birdwatching might not seem the kind of hobby to attract the Indiana Jones type, but Gerry Nicholls is what you might call an extreme bird watcher. This year he and his friends set out on an international chase for a creature that has never been officially sighted. 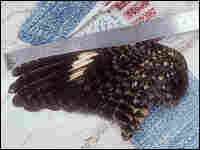 The wing of the Nechisar nightjar, found on the Nechisar Plains of Ethiopia 20 years ago. Courtesy Roger Safford hide caption 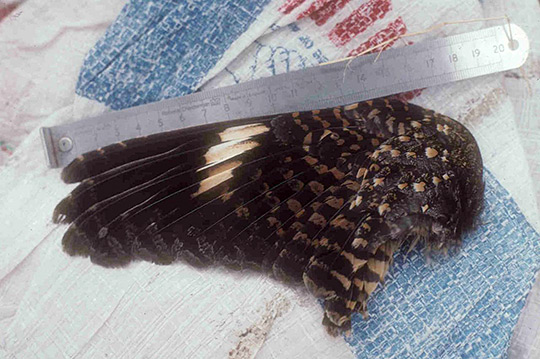 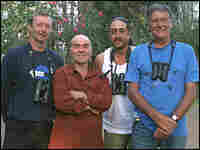 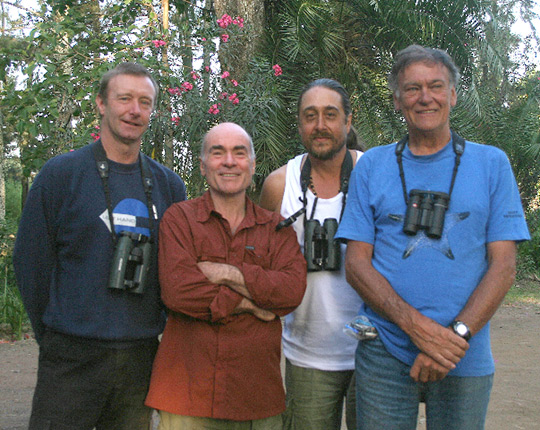 Bird watching might not seem the kind of hobby to attract the Indiana Jones type, but Gerry Nicholls is what you might call an extreme bird watcher. This year he and his friends set out on an international treasure hunt for a very mysterious bird.

Their subject is a bird Nicholls says no birdwatcher has ever seen. Twenty years ago a researcher found it dead and decomposing in a remote Ethiopian plain and brought back just a wing to the Natural History Museum in London.

"Halfway up the wing is a big, beige patch, so it was very distinctive," Nicholls says. "And on the basis of just one wing, it was described to science as a new species, Caprimulgus solala — solala meaning 'only a wing.'"

Nicholls, 61, grew up in England, but now lives in Connecticut, where he works as a nurse. He's been all over the world trying to get a glimpse of rare species. His fellow adventurers included Ian Sinclair, a South African author of several bird field guides, and buddies Vernon Head and Dennis Weir — whom Nicholls mostly refers to by their nicknames, Winky and Fruitcake. They knew finding the bird, which is more commonly called the Nechisar nightjar, was a long shot.

"We called it a pirate's map," Nicholls says. "It was a line drawing with an X — X marks the spot, as far as he remembered."

The four friends flew into Addis Ababa, drove two days south to a hotel and then took a bumpy, five-hour drive into the plains. They hired a guard with a Kalashnikov for protection.

Nightjars, as their name suggests, come out at night, so the way to find them is to shine a light, look for the reflection of their eyes, and sneak up on them. Incredibly, on the first night they were there, two of them saw a bird they were sure was the Nechisar nightjar — but they didn't get the close look they were hoping for. So they went back two nights later with a net and video camera.

The video of that night is dark, just a spotlight on a patch of grass. Fruitcake, who's holding the light off-camera, can see the bird. He directs Sinclair and Winky toward it, but they can't make the bird out from the shadows.

"It's next to that big stone," Fruitcake calls.

"Where's the bird?" comes the response from Sinclair and Winky.

Suddenly there's a flutter. Sinclair's net shoots out, but misses by inches. All Sinclair and Winky catch is a glimpse of that distinctive wing pattern as the bird escapes. And it definitely was a bird, but the video's so blurry it could be a pigeon. The adventurers had found their prey, but failed to capture proof.

But Nicholls says he's not disappointed. "It is what it is, and it's part of the mystery, and I wouldn't change any of it," he says. "It would have been nice to have touched it and had a little quiet word in its ear, a little friendly chat. But the biggest thing would have been to have caught it and let it go."

The four plan to submit their findings to some of the top bird journals. Nicholls acknowledges some people may doubt they actually saw the Nechisar nightjar, but says that's missing the whole point.

"This is old, 1800s adventurism, and we did it. That's what matters." If anyone doesn't believe him, he says, they should head to Ethiopia and check it out for themselves.

The Nechisar nightjar makes its escape.