Accessibility links
William Fitzsimmons: A Songwriter With Vision His parents were blind, but he grew up with music everywhere. And after years as a mental health therapist, he's returned to the aesthetic of his mother's favorite folk records. Fitzsimmons discusses the music and heartache of his latest album.

Songs From 'The Sparrow And The Crow'

I Don't Feel It Anymore (Song of the Sparrow)

Please Forgive Me (Song of the Crow) 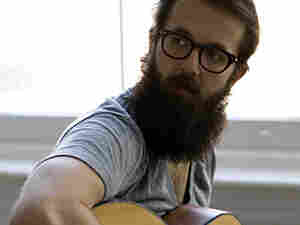 Because his parents were blind, William Fitzsimmons grew up in a sonic-rich environment: His mother raised birds, and his father played the organ. Tim Gaylord hide caption

William Fitzsimmons was born to blind parents. So he grew up reacting more to sounds rather than sights. While his classmates were rushing home to watch television, he would join in the music his folks played at night — his father was a classical organist, and his mother was into Joni Mitchell, Peter Paul & Mary and Bob Dylan.

In college, he gave up music to study psychology. And he became a practicing mental health therapist.

But music kept calling him back. Fitzsimmons is a full-time musician now, and he recently released a new album called The Sparrow and the Crow. He told host Guy Raz that his father's classical music didn't really influence him directly, but his mother's folk records certainly did.

"A lot of those artists could make you feel something very, very saliently without hitting you in the face with volume or anything like that," he says. "They use their words, and sweet melodies and things like that. I try to emulate that as appropriately as I can."

Fitzsimmons wrote the music of The Sparrow and the Crow in the middle of his divorce from his first wife. He mentions that his previous album, Goodnight, is about his parents' divorce.

"The irony isn't lost on me, but it's not the good kind of irony that gives you a belly laugh," Fitzsimmons says. "It's the other kind."