Accessibility links
Unlikely Farmers Make A Homestead In The Hood Novella Carpenter, attracted to a rural lifestyle but not rural solitude, sets out to raise food — everything from pumpkins to pigs — in the ghetto. Her very funny account in Farm Cityis never preachy, yet inspires.

Unlikely Farmers Make A Homestead In The Hood

Unlikely Farmers Make A Homestead In The Hood 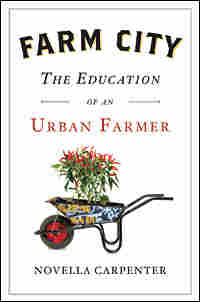 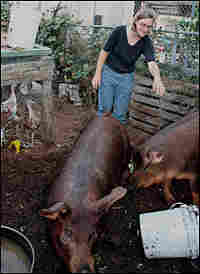 "I have a farm on a dead-end street in the ghetto," begins Farm City, Novella Carpenter's witty and freewheeling account of her adventures learning to raise her food — everything from pumpkins to pigs — in a grungy urban neighborhood. Just as Carpenter gives Isak Dinesen's classic opener her own wry 21st century twist, she brings a refreshing irreverence to a trendy topic — urban homesteading — that is too often cloaked in sanctimony.

Carpenter, a journalist who writes about food and who moonlights at a biodiesel station, and her boyfriend, Bill, an auto mechanic, were initially drawn to their Oakland, Calif., apartment because of the ravaged empty lot that sat next door. Where some might see urban blight, these two saw possibility. Carpenter had always been attracted to a rural lifestyle; rural solitude, not so much. "With its late-night newsstands and rowdy bars, a city meant I would never be lonely," she writes.

Carpenter started off by planting vegetables in that weedy lot, soon acquired honeybees, then chickens, turkeys and rabbits. This unplanned escalation — organic in every sense of the word — constitutes the plot of her unlikely page turner. Carpenter's animals, even those who will end up on her dinner table, become eccentric characters in the saga, tenderly and vividly described. At every juncture, Carpenter doubts herself, worries about offending delicate friends and annoying the neighbors, then tries something even wackier.

Until, finally, enter the swine. The arrival of two piglets marks the tale's surreal climax — the extreme, it appears, to which this urban farm, Carpenter's moxie and the neighbors' patience can be pushed. Carpenter feeds the pigs from high-end restaurant dumpsters and watches in horrified fascination as they morph into ravenous and intimidating beasts. Then she learns to make prosciutto.

Carpenter's prosciutto is about as hyperlocal, organic and sustainable as a ham can get. But while Carpenter is a self-described "ecofreak," she manages to avoid sermonizing about the nobility of her endeavor. She cheerfully concedes she might be a little bit nuts, and although (or maybe because) she never once gets on her soapbox, her very funny book is also deeply inspiring. "This place reminds me of my grandma," says a passerby, gazing at the lush farm sprouting out of the ghetto. "Everything's so growing."

I have a farm on a dead-end street in the ghetto.

My back stairs are dotted with chicken turds. Bales of straw come undone in the parking area next to my apartment. I harvest lettuce in an abandoned lot. I awake in the mornings to the sounds of farm animals mingled with my neighbor's blaring car alarm.

I didn't always call this place a farm. That didn't happen until the spring of 2005, when a very special package was delivered to my apartment and changed everything. I remember standing on my deck, waiting for it. While scanning the horizon for the postal jeep, I checked the health of my bee colony. Honeybees buzzed in and out of the hive, their hind legs loaded down with yellow pollen. I caught a whiff of their honey-making on the breeze, mixed with the exhaust from the nearby freeway. I could see the highway, heavy with traffic, from the deck.

I noticed that three bees had fallen into a watering can. As their wings sent out desperate ripples along the water, I broke off a twig from a potted star jasmine and offered it to the drowning insects. One bee clambered onto the stick and clung to it as I transported her to the top of the hive. The next bee did the same — she held fast to the twig like a passenger gone overboard, clutching a lifesaver. Safe atop the hive, the two soggy bees opened their wings to the morning sunlight. Once dry and warm, they would be able to fly again. Just to see what would happen, I lifted the final rescuee to the entrance of the hive instead of the top. A guard bee stomped out from the dark recesses of the brood box. There's always one on vigil for disturbances, armed and ready to sting. As the guard bee got closer to the wet one I braced myself for a brutal natural history lesson.

The waterlogged bee started to right herself as she waved a soggy antenna. Another guard bee joined the first, and together they probed the wet bee. She couldn't have smelled of their hive anymore, which is how most bees recognize one another. Nonetheless, the guards began to lick her dry.

I peered down to the end of our dead- end street.

A new car, a silver Toyota Corolla, had arrived on 28th Street the night before, probably the victim of a joyride — Corollas are notoriously easy to start without a key. Local teenagers steal them and drive around until they run out of gas. Already the car had lost one wheel. By nightfall, I predicted, it would be stripped completely.

Amid the jumble of abandoned cars and trash and the shiny Toyota Corolla, I made out the figure of the man who was yelling. He waved vigorously. Bobby.

"Morning, sir!" I called and saluted him. He saluted back.

Bobby lived in an immobilized car. He switched on his television, which was mounted on top of one of the other abandoned cars. An orange extension cord snaked from a teal- colored house at the end of the block. The perky noise of Regis and Kathie Lee joined the sound of the nearby traffic and the clattering trundle of the San Francisco Bay Area's subway, BART, which runs aboveground next to the highway.

Just then, a monk came out of the Buddhist monastery across the street from my house and brought Bobby a snack. The monks will feed anyone who is hungry. Next to the fountain in their courtyard there's a giant alabaster statue of a placid-faced lady riding a dragon: Kuan Yin, the goddess of compassion. My bees loved to drink from the lotus-flower-filled fountain. I often watched their golden bodies zoom across 28th Street, at the same height as the power lines, then swoop down behind the temple's red iron gates.

The monk who handed Bobby a container of rice and vegetables was female, dressed in pale purple robes, her head shaved. Bobby took the food and shoved it into a microwave plugged in next to the television set. Nuked his breakfast.

I heard the clattering sound of a shopping cart. A can scrounger. Wearing a giant Chinese wicker hat and rubber gloves and carrying a pair of tongs, she opened our recycling bin and started fishing around for cans. She muttered to herself in Chinese, "Ay- ya."

I watched as Bobby jogged over to her. I had never seen him run before. "Get out of here," he growled. His territory. She shook her head as if to say she didn't understand and continued fishing. Bobby butted her with his belly. "I said get," he yelled. She scurried away, pulling her cart after her. Bobby watched her retreat.

Then, when she was almost around the corner, as if he felt bad, Bobby put his hands to his mouth and yelled, "I'll see you at the recycling center!" Just a few blocks away, the center paid cash by the pound for metal. Chuckling to himself, Bobby glanced up at me on the deck and flashed me a mostly toothless smile.

This place, this ghetto of Oakland, California, brings out the best and the worst in us.

Bored of waiting around outside, I headed back inside my apartment. A fl y strip dangled from the ceiling, and ripped feed bags piled up near the door. A black velour couch my boyfriend and I found in the street sagged in the corner.

I guess the neighborhood brings out the best and worst in me, too. Sure, my chickens lay eggs — but the flock has spawned an occasional rooster that crowed loudly and often, starting at 4 a.m. Bees do result in honey and wax and better pollination — but they have also stung people from time to time. The garden: verdant cornucopia on one hand, rodent-attracting breeding ground on the other.

I flopped onto the couch and read the chalkboard tally that hung near the door:

That tally was about to change. 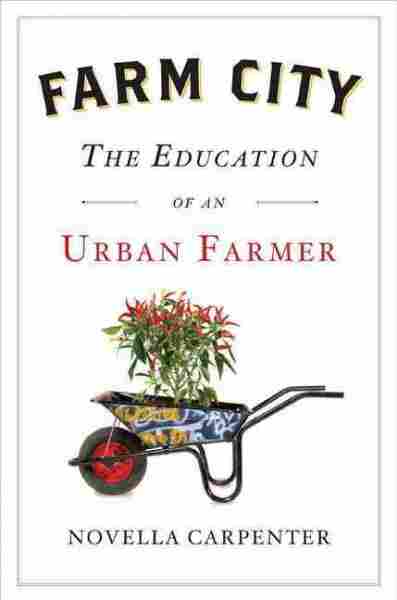 The Education of an Urban Farmer