Accessibility links
Maxwell Takes Soul Back To Basics At a time when soul music is heavily tricked-out, singer Maxwell likes to pare things down, inviting listeners in with his smooth, fluttery singing and raw emotion. In 2001, Maxwell scored a top-selling album, then disappeared. He's back with a new album, BLACKsummers' Night.

When a recording artist just up and vanishes for an extended period of time, we automatically assume the worst. Perhaps he or she has been gobbled up by addiction, or has engineered some radical transformation that leaves faithful fans puzzled. 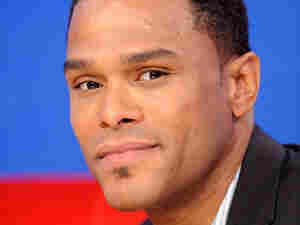 Maxwell's case is different. The singer and songwriter says he went off to experience normal life, away from the fast track. He'd been successful right out of the gate: His 1996 debut, Maxwell's Urban Hang Suite, helped popularize the back-to-basics style known as "neo-soul." After that, he found himself locked into the endless cycle of recording and touring. He decided to take a break.

While Maxwell was off rethinking his career, the R&B world changed. Hitmakers began chasing a high-gloss, almost clinical ideal of perfection, valuing production dazzle over raw emotion. Maxwell's new music goes against all that. The rhythms are generated by live drummers, not machines. There's a raucous horn section. And Maxwell didn't rely on AutoTune (the sound-doctoring software) to create these elaborate, Marvin Gaye-style vocal chorales.

The new Maxwell record hardly sounds revolutionary. The sensitive-guy love songs are exactly what his fans expect. As in the past, the spotlight is fixed on his smooth, fluttery singing. Still, there's something a teeny bit bold going on: At a time when R&B is super tricked-out, here's Maxwell, paring things down, inviting listeners in with an old-fashioned wine-and-candlelight seduction. These days, that's almost radical.