Accessibility links
Lee Fields: Older And Closer To Perfection In a curious case of musical evolution, the older Lee Fields becomes, the closer he gets to perfecting the sound of soul that he grew up with. His latest release, My World, finds an ideal middle ground between the slow grind of Southern blues and the faster, funkier stylings of retro-soul.

Fields has been recording since the 1970s — click here to read more from Oliver Wang on the prolific singer's body of work, and hear 5 songs. 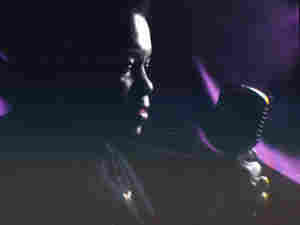 For 40 years, Lee Fields has been one of soul music's most eclectic and prolific artists. Courtesy of the artist hide caption

North Carolina's Lee Fields has always been a challenging singer to place in time. As a young artist in the 1970s, his style was so similar to James Brown's that people called him "Little J.B." In fact, if you heard his 1979 debut, you'd be forgiven for thinking it was recorded a decade earlier.

Fields more or less disappeared during the '80s, but resurfaced in the early '90s as part of the Southern rhythm-and-blues scene. You could still hear traces of Otis Redding and Wilson Pickett in his crooning, but musically, he updated — to cheap synthesizers and drum machines.

Despite a lucrative career in Southern soul, Fields' "Little J.B." days were a persistent itch, and by the end of the '90s, Fields found a band that could help him scratch it. Many of the same players who are now part of Sharon Jones and the Dap-Kings recorded with Fields for his 1999 album Let's Get a Groove On, nailing a pitch-perfect funk sound that evaded Fields even a quarter-century earlier.

For the last decade, Fields has kept his career firmly planted in the venerable Southern R&B scene while raising his profile among the retro-soul hipsterati in Brooklyn, Paris and beyond. His latest release, My World, is another rewind to the '60s and '70s. But more so than any of his other albums, it finds an ideal middle ground between the slow grind of Southern blues and the faster, funkier stylings of retro-soul.

Fields' voice has lost some of the fire of his youth, but its graceful aging lends itself well to the album's sublime slow jams. His impassioned pleas now resonate with a poignant fragility familiar to generations of great balladeers. In a curious case of musical evolution, the older Fields becomes, the closer he gets to perfecting the sound of soul that he grew up with as a young man.