Accessibility links
Millions Spent On Ad War Over Health Care Overhaul With battle lines drawn over overhauling health care, industry and advocacy groups have begun pouring millions of dollars into TV ads. The air wars mimic the fight 15 years ago when Clinton was in office, while spending on the ads looks a lot like the 2008 presidential campaign. 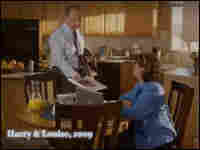 With just a few weeks left for Congress to meet the deadline President Obama set for passing a health care overhaul bill, interest groups have ramped up their TV campaigns. In effect, they're spending millions of dollars to refight the air wars of 15 years ago, when the battlefield was the health care initiative under President Clinton.

The money is flowing, just as it did then. And some of the old players are back, like Harry and Louise, that nice middle-class couple invented by the health insurance industry to dismember the Clinton plan.

But Harry and Louise have switched sides and now sound optimistic about an overhaul that provides "good coverage that people can afford."

Harry and Louise still have deep-pocketed friends in the health care industry. The ad is jointly sponsored by Families USA, a pro-reform group, and by PhRMA, the trade association of the prescription drug industry. Together, they're spending about $4 million.

That's a fair chunk of cash. But it's only about one-third of what PhRMA has spent this year lobbying members of Congress face to face on the gritty details of health care.

"We don't see eye to eye on everything on health care reform," says Families USA director Ron Pollack, the man who revived Harry and Louise and who enlisted PhRMA's help with the ad.

"We do have a core agreement about making coverage affordable for people who don't have coverage today, or are underinsured, or are at risk of losing coverage," he says. "And it's based on that agreement that we are working together."

But Harry and Louise still raise eyebrows — this time on the right. That includes the eyebrows of Amy Menefee with Americans for Prosperity. She questions the motives of PhRMA and other industry groups that didn't go hard-line against the overhaul.

"They've been looking out for their own self interests and trying to protect their little corner of the industry," she says.

So the ads look a lot like the 1990s, but the financing behind them looks like something else entirely: the 2008 presidential campaign. Now, as then, President Obama's allies have far outspent the opposition.

The price tag for health care ads so far this year is roughly $35 million. But at the Campaign Media Analysis Group, where they keep track of it all, Evan Tracey wonders if it works.

"For advocacy advertising to have an effect, the equation is really sort of time plus money. And right now you may have money, but you may not have very much time," he says.

Not if the White House timetable holds and both the House and Senate vote on versions of the bill this summer.

After all, summer is when Americans are out of the house and ignoring the TV.