Accessibility links
Obama: Overtreatment Drives Health Care Costs President Obama, and experts from the Mayo Clinic, are advocating an end to the "fee for service" system that encourages doctors to order more office visits, tests and procedures — and pushes up costs for health care. 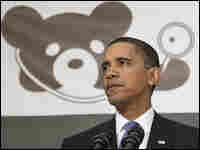 President Obama has promised to overhaul the nation's health care system in a way that controls costs and expands insurance coverage. But critics say the legislation that has appeared so far would achieve only one of those goals.

"We don't see anything in there of any real substance with regard to paying for value," said Denis Cortese, president of the Mayo Clinic. "To us, that's real health care reform — paying for value."

The Mayo Clinic is famous for providing world-class quality. It is also one of the health care industry's great bargains, with costs 28 percent below the national average, according to researchers at Dartmouth College.

Cortese says the United States should aim for both high quality and cost savings — a combination he calls "higher-value care."

The lack of cost controls also spooks some of the moderate Democrats on the House Energy and Commerce Committee, who met with the president Tuesday; these lawmakers worry that spiraling health-care bills will bleed the government dry.

In response to these concerns, the Obama administration stepped forward late last week with an 11th-hour tourniquet. The president called for an independent council of medical experts to oversee Medicare payments and recommend cost-saving changes.

"Our proposal would change incentives so that providers will give patients the best care — not just the most expensive car — which will mean big savings over time," Obama said.

The government already has a Medicare Advisory Commission, but its advice on cost-cutting is often ignored by lawmakers. The president's plan would give teeth to the recommendations by requiring Congress to approve or disapprove them as a package, much as it did with the military-base-closing commission.

"What we want to do is force Congress to make sure they're acting on these recommendations to bend the cost curve each and every year," the president said.

The administration suggests that one way to bend the cost curve down is to change the way doctors and hospitals are paid.

The health care industry's current "fee for service" model allows doctors and other providers to receive a fee for each service — every office visit, test and procedure. The administration's idea is to discourage unnecessary tests and procedures that often go along with the existing fee-for-service model.

Massachusetts, for example, is one state looking for alternatives to the fee-for-service model; the state is now exploring a system that would set fixed prices for treating patients of a given age with a given illness.

This payment model would represent a pretty radical overhaul, but there are examples of this approach already in place, including the Mayo Clinic.

Doctors at the clinic are on salary, so they have no financial incentive to order extra procedures. Mayo's Cortese strongly supports the idea of using an expert panel to recommend such changes. By adjusting Medicare payments, he said, the government could send ripple effects throughout the health care system.

"It will change the delivery system over time, and it will end up getting the country where we've all been saying we'd like to be," said Cortese, "and that is getting our money's worth."

The White House argues that using an expert panel to recommend changes every year would provide flexibility to adjust to changing needs. It also allows the administration to promise health care savings in the future, without having to detail just how those savings would be achieved.