Accessibility links
For Obama, Health Care Overhaul Is Make-Or-Break President Obama is set to take his health care hard sell to the American people in a prime-time news conference Wednesday night. His planned overhaul is mired in a partisan fight that even supporters say Obama needs to win — at the risk of the rest of his agenda. 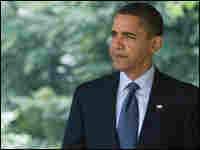 During an appearance Tuesday in the White House Rose Garden, President Obama defended his health care plan. And he scolded Republicans for "playing the politics of the moment." Saul Loeb/AFP/Getty Images hide caption 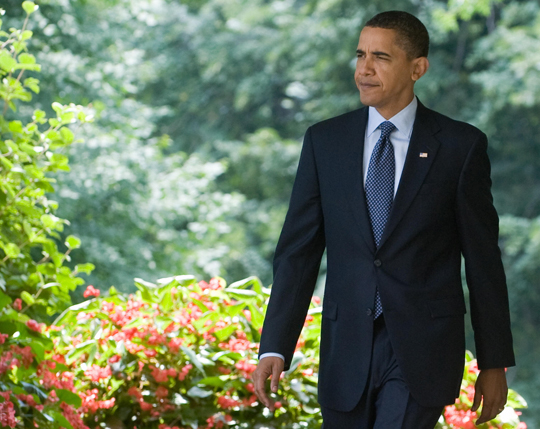 During an appearance Tuesday in the White House Rose Garden, President Obama defended his health care plan. And he scolded Republicans for "playing the politics of the moment." 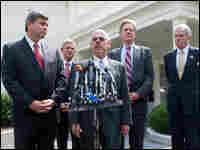 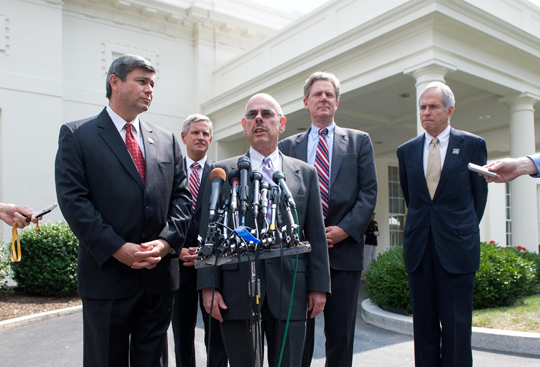 California Rep. Henry Waxman (center) stands alongside fellow Democratic lawmakers outside the White House on Tuesday, after their meeting with President Obama about health care.

We have the most expensive health care system in the world, yet millions are uninsured. President Obama is asking Congress to find a way to extend coverage to every American. Can they do it? View the series "Prescriptions for Change" to learn more.

President Obama is scheduled to take his health care hard sell to the American people Wednesday, during a prime-time news conference that comes in the midst of an increasingly strident free-for-all over the politics and price of his planned overhaul.

On the line is the centerpiece of the president's domestic agenda, now mired in a partisan Washington battle that even his most ardent supporters say the president needs to win.

"In health care, this is his moment of root hog or die," says Don Fowler, a prominent South Carolina Democrat and past national chairman of the Democratic National Committee. He used the old-timey catchphrase to describe the president's imperative to do the work needed to get the health care overhaul passed — or suffer the consequences.

And, Fowler says, the consequences cannot be underestimated.

"In terms of his presidency, more rides on this than just health care," Fowler says. "If he wins this battle, I think it would open doors so he can get most anything he wants. If he loses, it's not only going to be damaging to health care but also to the rest of his agenda."

Obama's increasingly aggressive push for his plan to expand health care coverage includes a national mobilization of the grass-roots network formed during his presidential campaign. The president's stepped-up role comes as he faces stubborn resistance from moderates in his own party who are balking at the plan's $1 trillion price tag over the next decade.

A spate of recent polls has also showed sagging public confidence in his leadership, while unemployment continues to creep up. And the president's goal to have health care legislation before Congress leaves for its August recess is appearing increasingly remote.

Republicans, sensing opportunity, have raised the political stakes for the president — and for themselves — by launching a full-out assault on Obama's health care initiative, but without offering up alternatives.

The president this week seized on an assertion by GOP Sen. Jim DeMint of South Carolina, who predicted that Republicans could "break" Obama politically by making the health care issue his "Waterloo."

During an appearance Tuesday in the White House Rose Garden, Obama defended his health care plan and what he characterized as "substantial common ground" that has been reached on the overhaul. And he scolded Republicans for "playing the politics of the moment."

It is, the president said, a "familiar Washington script."

What Obama needs to do Wednesday night and in the two weeks leading up to the August congressional recess is to better outline the risks that failure poses, says Darrell West of the liberal Brookings Institution.

"His numbers may be falling, but he still retains a strong reservoir of public support," West says. "He needs to use that to get Congress to move and to send out the central message that the risks of failure are incredibly high, that status quo in the health care system is unacceptable."

The longer it takes to finalize a health care deal, the more difficult it will be for the president to get the legislation he wants.

"We're headed toward a 10 percent unemployment rate and continued economic concerns," West says. "His approval rating is much more likely to be lower in the fall. He'll be in a weaker position to make his case to Congress, and it will all be much riskier for him."

The president on Tuesday laid out his argument for swift and decisive action, and he is expected to repeat those themes tonight.

Consensus has been reached, he said, on a number of issues, from extending health care coverage to an unprecedented number of Americans and "promoting choice" and comparison shopping among insurance plans, to emphasizing prevention and limiting out-of-pocket expenses for those facing catastrophic illnesses.

Americans "don't care who is up and who is down politically in Washington," Obama said. "They care about what's going on in their own lives. They care about whether their families will be crushed by rising premiums."

But Republicans have their own talking points: criticizing the August imperative as too soon for such a complicated and expensive undertaking; pointing to an eye-popping Congressional Budget Office analysis that predicted the current plan would not contain health costs over time; and taking on proposals to tax wealthy Americans to pay for the plan. (Republicans say the tax would hit small businesses, but analysis shows that of all taxpayers who report some business income, only 4.2 percent would be subject to the higher taxes being considered.)

Fowler, the former DNC national chairman, says the GOP has been successful in introducing doubt about the workability of the plans coming out of committees in the Democratic-controlled House and Senate.

But some GOP analysts warn that if party members don't offer up an articulate, constructive alternative along with their criticism, they may end up harming themselves.

Said one strategist: "Republicans need to show that we're for health reform — just not a government takeover. There has not been a lot of consistency on that message."

History has shown that meaningful opportunities for health care reform, because of its difficulty, "come around once every generation," says the Brookings Institution's West.

This is the president's chance, he said, and he's gotten further than most by managing to get congressional committees to vote on health care policy changes.

"But the goal is not a committee victory — it's actually getting legislation through Congress," West says.

Obama's moment of root hog or die has indeed arrived.

"He, as the lone leader, must find a way through these choices," Fowler says, "and induce compromises that meet his standards."

And that, Fowler says, goes well beyond press conferences and speeches.