Accessibility links
The Man Who Made Baseball's Box Score A Hit Henry Chadwick brought the baseball box score to the people in 1859. Today, millions of fans start their day checking the scores and trying to dissect them. Baseball guru Bill James, today's master statistician, helps put Chadwick's achievement in perspective. 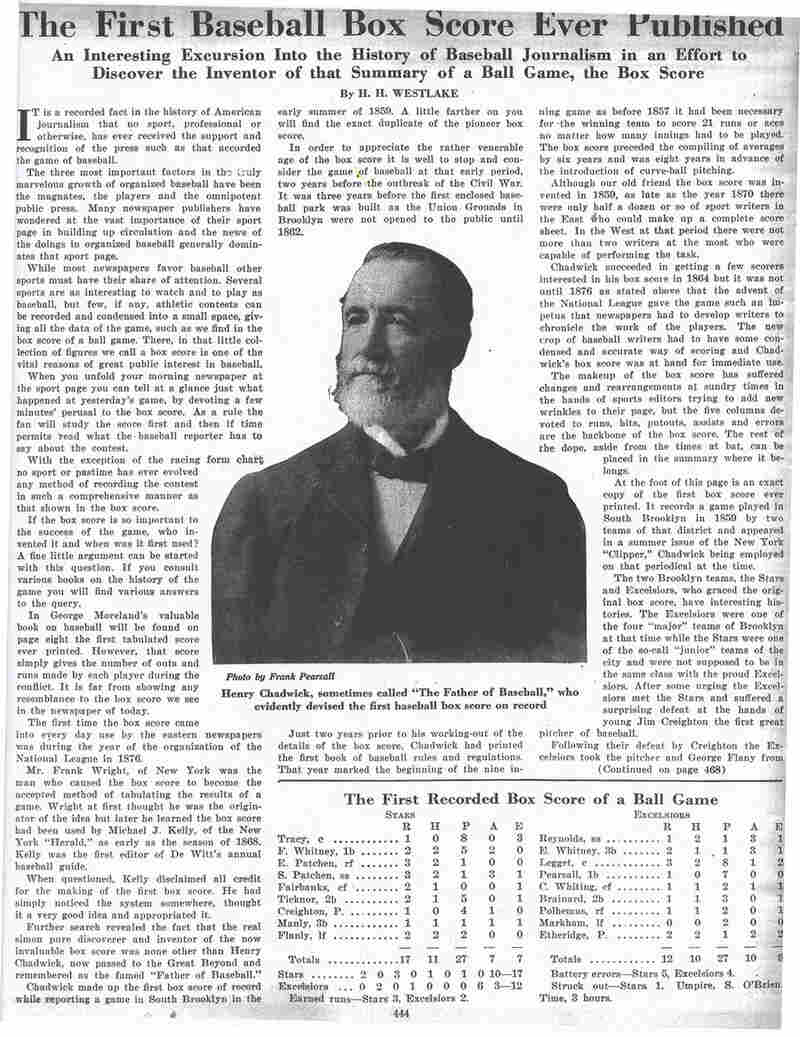 A copy of Chadwick's 1859 box score was reprinted by Baseball Magazine in 1925. Courtesy of the National Baseball Hall of Fame hide caption

toggle caption
Courtesy of the National Baseball Hall of Fame 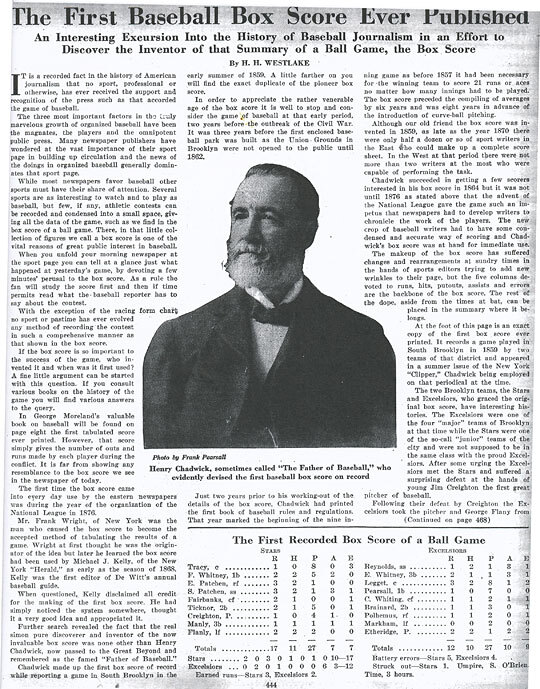 A copy of Chadwick's 1859 box score was reprinted by Baseball Magazine in 1925.

Courtesy of the National Baseball Hall of Fame

Henry Chadwick was born in England in 1824 and raised on cricket, but he grew to love a new bat-and-ball game played in his adopted homeland of America: baseball.

The Brooklyn, N.Y.-based sportswriter for the Long Island Star and The New York Clipper was "an intelligent, organized man," according to his intellectual descendant, baseball guru Bill James. James says Chadwick was "the first of that type to take the game seriously enough to get as much as he could to the public."

What he gave the public in 1859, was the box score — a set of statistics accounting for the runs, hits, put-outs, assists and errors compiled by the dominant team of the era, the Brooklyn Excelsiors, in their defeat at the hands of the upstart Brooklyn Stars.

Chadwick not only noted the strikeouts, he coined the term "strike-out," among his many contributions to the vocabulary of baseball. For instance, to this day the reason a strikeout is recorded as a K is because Chadwick used the phrase "the batter was struck."

Back then, according to Chadwick biographer Andrew Schiff, "the box score was the only way of showing the game, there really was no photography. So the writer really was the person at the center between the fans and the player at the game."

More often than not, Chadwick was the very writer in question. His support and intellectual fervor helped stoke the nation's passions for the then-fledgling sport. Chadwick was posthumously honored with inclusion in baseball's Hall of Fame, in an induction ceremony which credited him with having invented the box score.

There may be two problems with that description.

The first is the claim of invention. Some historians point out that there were antecedents to Chadwick's innovation: statistics were printed in newspapers more than a decade earlier, and box scores expanded in the decades after.

The idea of the 1859 box score being the first really gained momentum when a 1925 edition of Baseball Magazine reprinted Chadwick's New York Clipper article. It is perhaps useful to think of the box score as having evolved like a species.

Taxonomists may differ as to what point in the evolutionary chain we have the definitive beast, but it is clear that in 1859 what Clipper readers saw was unmistakably a box score. Before then, newspapers were mainly tabulating runs.

The second problem with crediting the 1859 Chadwick box score with being the first is in the word "credit." Many of Chadwick's choices — including ignoring the base on balls — reverberate to this day.

A ballplayer's batting average fails to account for how often he draws a walk. Bill James, an adviser to the Boston Red Sox, has spilled much ink in his series, the Historical Baseball Abstract, trying to correct the slight that the walk has been made to endure over the years.

"Chadwick and those who followed him for a long time tended to regard the walk as something that was done by the pitcher," says James. "What they failed to understand is that actually the batter has as much or a little more to do with when the walk occurs as the pitcher does. They ignored that element of it and that did distort the game for a lot of people."

Still, James regards Chadwick much as Stephen Hawking looks at Copernicus. He reveres and credits the man whose assumptions he has spent some effort improving. James recognizes that Chadwick's innovation was many a hardcore fan's gateway to the game. James counts himself among that group.

"I became interested in box scores within a month of becoming a baseball fan," James says. "I remember quandaries and puzzles that occurred in box scores when I was very young that I still think about today.

Nearly half a century later James is bemused at the fact of his puzzlement, rather than still perplexed.

"How's that possible?" he asks. "...You can have a perfect day in the middle of a productive offense without either scoring or driving in a run?"

James is like millions of other fans whose first motion over a cup of coffee is toward the sports page, or whose first mouse click directs them to the link that says "Box Scores."

They are dissecting and forever trying to crack the code that an ex-cricket fan invented 150 years ago this season.