Accessibility links
A New Owner For 'The Onion'? "America's finest news source," The Onion, is joking that it has been taken over by a Chinese conglomerate. Editor Joe Randazzo tells NPR the satirical paper was "at a point of great vulnerability, crouched like an injured dog in the corner."

The Onion, "America's finest news source," says it has been bought buy the Yu Wan Mei Corp., based in Sichuan province. Editor Joe Randazzo says the newspaper was "at a point of great vulnerability, crouched like an injured dog in the corner." www.theonion.com hide caption 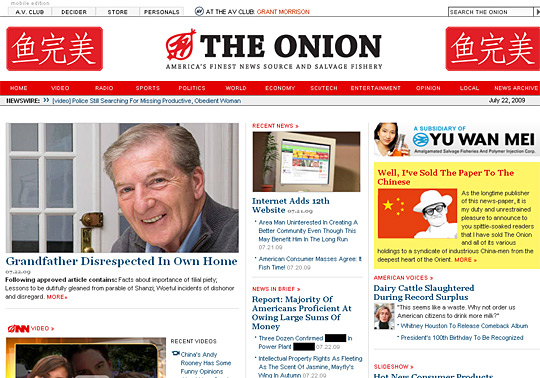 The Onion, "America's finest news source," says it has been bought buy the Yu Wan Mei Corp., based in Sichuan province. Editor Joe Randazzo says the newspaper was "at a point of great vulnerability, crouched like an injured dog in the corner."

"America's finest news source" has been bought by a Chinese company.

At least, that's what the satirical newspaper The Onion claims on its homepage, with the amended tagline: "America's finest news source and salvage fishery."

The paper says it was sold to a conglomerate based in China's Sichuan province — the Yu Wan Mei Amalgamated Salvage Fisheries and Polymer Injection Corp.

"As you know, the American newspaper and print industry has been in great, great decline," Joe Randazzo, the paper's editor, tells Robert Siegel. "And The Onion was at a point of great vulnerability, crouched like an injured dog in the corner. And the Yu Wan Mei group came [and] saw it as an opportunity to at once extend its reach into the Western world — and to also provide benevolent support in its time of need."

"The note that I was given from my superiors was that that was a printing error," Randazzo says.

Also, on The Onion's radio network, Doyle Redland, "the most trusted man in America," reports about a ping-pong champion "who credits his victory to a nutritious diet of fish byproducts" and then reminds listeners that the Onion Radio News is "brought to you by Yu Wan Mei, home of natural lizard oils."

In explaining this conflict of interest between a news story and an owner's push for profit, Randazzo simply says China's table tennis athletes are some of the greatest in the world.

"They work harder than most American athletes; they have more honor and pride and respect for their sport and for their leaders and community," he says. "I think this is just our chance to highlight that."

Randazzo goes on to say that Yu Wan Mei's intentions are pure.

"The Onion has always been a one-way conduit for information," he says. "We disdain our readers. If it weren't necessary to have readers, I don't believe that we would. The Onion, like the Yu Wan Mei Group, is a profit-based enterprise. The only difference between the two is that Yu Wan Mei would never deceive any of its customers. ...It strives for the betterment of its community and profit. And also, may I add that fish time is success time."

But, ultimately, while the takeover may seem believable, given Chinese economic strength and the state of the newspaper business, Randazzo admits that The Onion was never actually bought by the fictional Yu Wan Mei.

"I'm sure there are many Chinese conglomerates out there that would love to buy The Onion," he says. "We are, in fact, still a solvent independently owned American company."