Accessibility links
Second City Takes On Obama In New Show When Barack Obama was elected president, some comedians complained. But Obama does not intimidate Second City, the Chicago-based comedy troupe, which is performing a show called Barack Stars in the nation's capitol this month. 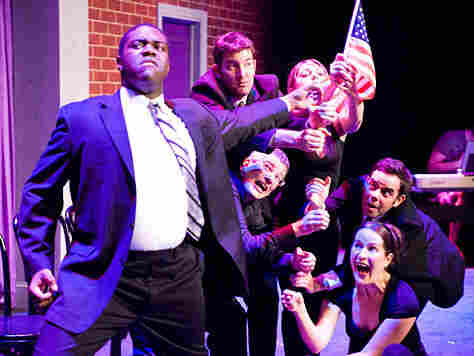 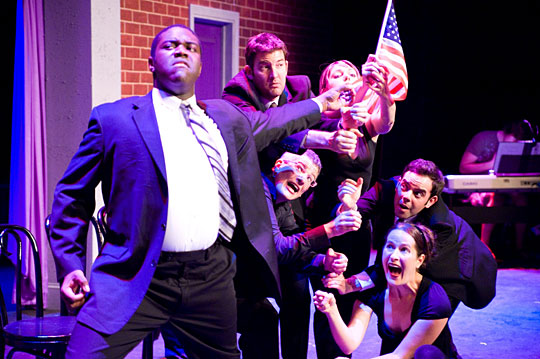 Members of Second City perform in Barack Stars, a comedy the new administration.

When Barack Obama was elected president, some comedians complained.

Chris Rock said Obama is "a comedian's worst nightmare." Bill Maher said, "On top of being perfect, he's black and liberals are afraid to laugh at anything with a black person in it."

But Obama does not intimidate Second City, the Chicago-based comedy troupe, which is performing a show called Barack Stars at the Woolly Mammoth Theatre in Washington.

The raucous and irreverent show features Chief of Staff Rahm Emanuel as an out-of-control pit bull — and Vice President Joe Biden as a giant run-on sentence.

"Sometimes when he speaks, he's got a little bit of Martin Luther King in his voice," says cast member Sam Richardson, who has been impersonating Obama for about a year and studying his mannerisms for even longer. "But sometimes he'll bring it way down and he'll just be talking to you ... because he's got so many nuances and he's such a dynamic figure it's fun to play with that."

Everyone is fair game in Barack Stars, including Barack fans.

"A lot of our Obama material is rooted in exaggeration. There's real-life Obama worship out there and that can be a lot of fun," says Second City's Marc Warzecha, who directs Barack Stars.

Second City gets much of its material from the audience. At the comedy troupe's resident stages in Chicago and Toronto, the audience shouts out ideas for improv skits.

"Most of the time the audience is reflecting what's going on out there today," Warzecha says. "What they read in the paper in the morning, they're going to shout out at our improvisation at night and that's going to work it's way into our shows."

Second City is marking its 50th anniversary this year. It was founded at the University of Chicago by young actors who wanted to do political and social satire. Alumni include a who's who of American comedy: from John Belushi to Tina Fey.

Barack Stars is the first new show Second City has premiered in Washington.

"To get to do a whole show of Second City social and political satire, in our nation's capital, in a great theater just blocks from the National Mall is a real honor and privilege and thrill for all of us," Warzecha says.

Barack Stars is on stage at the Woolly Mammoth Theatre through Aug. 2.