Accessibility links
Drug Firms Pour $40 Million Into Health Care Debate During three critical months in the debate to overhaul health care, a powerful drugmaker consortium known as PhRMA and its members spent more than $3 million each week lobbying Congress. In the past, PhRMA has won most of its lobbying battles. 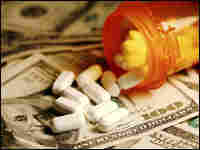 During three critical months in the debate to overhaul health care, a powerful drugmaker consortium known as PhRMA and its members spent $3 million and change each week lobbying Congress. Stefan Klein/iStockphoto hide caption 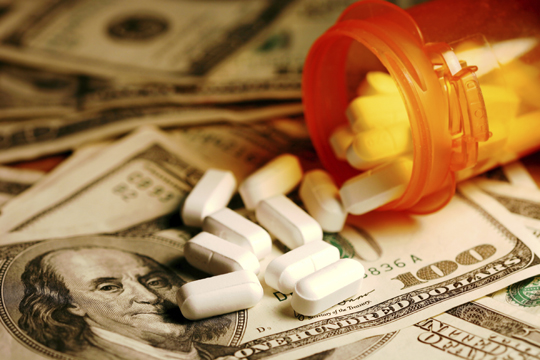 During three critical months in the debate to overhaul health care, a powerful drugmaker consortium known as PhRMA and its members spent $3 million and change each week lobbying Congress.

One of the most powerful players in health care is a group called the Pharmaceutical Research and Manufacturers of America, or PhRMA. It represents just 32 brand-name drug companies, but it has so much influence that when Congress passes a bill, PhRMA almost always gets its way. One big reason why: PhRMA and its members have spent millions of dollars lobbying Congress as lawmakers work to overhaul health care.

Any firm that spends significant money lobbying Congress has to file a quarterly report. Monday was the deadline for the second quarter, providing a chance to peer into three critical months in the health care debate: April, May and June. That's when Congress really got down to business with health care.

In those three months, PhRMA spent just over $6 million, which breaks down to about $2 million a month.

But the reports filed by the companies that belong to PhRMA reveal that during this same period, all but a few of them were running their own lobby shops as well. The drugmaker Pfizer alone spent $5.5 million. Amgen, Eli Lilly and GlaxoSmithKline spent about $3 million each.

Add it all up and you get this: In those three critical months, PhRMA and its member companies spent $40 million lobbying Congress. That's more than $3 million each week.

PhRMA declined to speak to NPR for this story. Four of its biggest members turned down or did not respond to interview requests.

'Patients Are Our First Concern'

However, PhRMA is speaking to the public — through advertisements.

"We need good coverage people can afford," says one ad. "A little more cooperation, a little less politics, and we can get the job done this time."

And PhRMA's CEO, the former Louisiana congressman Billy Tauzin, has been out there touting the consortium's support for a health care overhaul.

"Of course they're supportive — they're getting exactly what they want," says Jerry Avorn, a professor at Harvard Medical School. He, for one, is not shocked to hear that brand-name drug companies spent $40 million in three months.

"It's not surprising to learn this, because the pharmaceutical industry for years has been one of the most effective and powerful lobbying outfits in Washington, and it explains why we have a lot of drug policies in the U.S. that don't look like drug policies in any other industrialized country," says Avorn.

Avorn wrote a book about drugs and health care called Powerful Medicines. He compares the current fight to the one in 2003, when Congress last made a major health care change by adding prescription drug coverage to Medicare. Avorn says PhRMA's lobbying efforts were so vast and so intense that the result is now written into the law.

Today the government is empowered to negotiate how much it pays doctors, hospitals, laboratories — almost anyone who does business with Medicare. Anyone except pharmaceutical companies. Avorn points out that negotiating drug prices is illegal in the United States.

We have the most expensive health care system in the world, yet millions are uninsured. President Obama is asking Congress to find a way to extend coverage to every American. Can it be done? View the series Prescriptions for Change to learn more.

If you want to know what PhRMA is getting this time, Avorn says just look at what's not on the table during the debate:

Drug re-importation from Canada? Off the table.

Government-negotiated drug prices? Off the table.

There's something else drug companies bought with that $40 million: people.

PhRMA alone has 29 people lobbying for it. In the graphic on this page, you can dig into the reports, and you'll find that PhRMA also hired 45 different Washington, D.C., lobbying firms to represent it in those three months of the second quarter.

Most of the drug companies that belong to PhRMA are running their own lobby shops as well, plus the biggest ones have also hired dozens of D.C. lobbying firms.

So think about it this way: There are far more people in Washington representing one party of the debate — the big drug companies — than there are members of Congress working on the health care bill.

This is not to pass judgment on the merits of PhRMA's arguments, but rather to show just how much money and lobbying it uses to back them up — and the winning streak in Congress that follows.