Accessibility links
Minimum Wage Hike Spurs Optimism And Debate Millions of America's low-wage workers are about to get a raise. But economists are debating how the pay hike will play out. Some worry that forcing higher wages will hurt small businesses. Others say raising the minimum wage will generate more consumer spending. 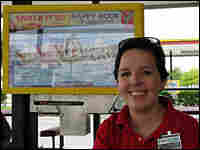 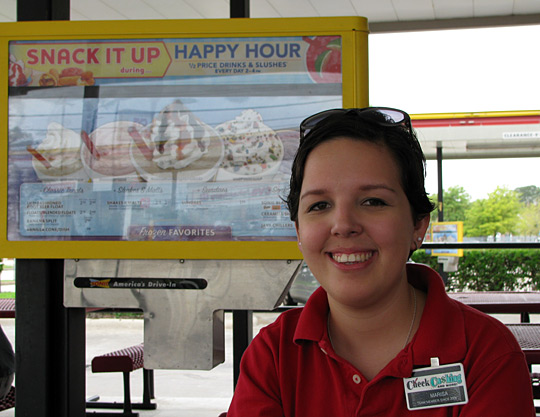 Marisa Purvis, 20, works two minimum wage jobs that help pay her way through Sam Houston State University in Texas. And while home on breaks, she works a third job at a grocery store called Foodtown.

Millions of America's low-wage workers are about to get a raise.

On Friday, the federal minimum wage will jump from $6.55 to $7.25 an hour. Congress approved that raise two years ago.

Back then, lawmakers didn't know the country would be in the grips of a deep recession this summer. And now, economists are debating how the increase will play out.

Some worry that forcing higher wages will hurt small businesses when they're most vulnerable. Others say raising the minimum wage will help the economy by generating more consumer spending.

Days And Nights At An Eatery

Jamie Clark is the face of the American low-wage worker — someone directly affected by Friday's change in the law.

The 24-year-old single mom is raising a 4-year-old while living in a crowded house with her own parents and siblings.

Clark spends her days, and many nights, at a downtown New Orleans eatery.

"We wait on tables," she says. "It's a small restaurant. We bus our own tables. You sort of do a little bit of everything." But she's still not earning a lot of money.

Right now, Clark's boss has to make sure that, including tips, she goes home with at least $6.55 an hour. With tomorrow's raise, Clark knows she'll be coming home to her son with at least $7.25 for each hour of effort.

It might not seem like much. But up until now, her son, Edward, has been getting his clothing and toys from neighbors once their kids are done with them.

"That's what I'm thinking about in my head," Clark says. "I'm like, $7.25? Now I can buy this. It's just really embarrassing not to be able to provide those simple things."

Maybe the extra money isn't enough for new clothing for Edward. But Clark thinks she has a better chance of buying a few of his school supplies. And perhaps just one of those Transformer toys he's been begging for.

"Being able to buy a toy for my son — that puts money back in the economy," Clark says.

But that's where Clark dips into the debate brewing among economists.

Many economists, like Eileen Appelbaum, director of the Center for Women and Work at Rutgers University's School of Management and Labor Relations, believe Clark is right: If low-wage workers have a bit more money to spend, that's good for the economy in a recession.

Appelbaum adds that a minimum wage hike is a good thing, no matter the timing.

"The minimum wage has always and ever and still is today a working woman's issue," she says." Two-thirds of minimum wage workers today are women. Why is it that we devalue the work women do? Why do we assume taking care of old people, working in hospitals, being a nursing aide, a home health aide, a child care worker — that the skills involved in that are things women are just born knowing? So why would we have to pay for them?"

Other economists, however, see potentially harmful effects on the economy — especially during a recession.

"It's hard to tell a story that something that everyone thinks helps people doesn't," says Richard Burkhauser, a Cornell University economist and another veteran of the long-simmering minimum wage debate.

Burkhauser says that as a rule, there are more effective ways — such as the Earned Income Tax Credit — to help the working poor.

Forcing small businesses to pay out higher wages can be a strain, and business owners often decide to cut jobs for low-skilled workers, he says. He adds that businesses are in a squeeze as it is.

"This is absolutely the worst time to raise the minimum wage," he says.

There is at least one anecdote to back that up.

A Lull In Maryland

Along the sun-drenched boardwalk in Ocean City, Md., businesses — pizza and ice cream shops, and those places where you can get anything pierced — are complaining about a drop in tourism.

That's good news for Sashi Nawaratnasamy, a college student spending her summer at the arcade, tending to those machines where you pop in a quarter and try to use a crane to pick up prizes.

She says she is hoping to make $3,000 to take back to school this fall. Her hourly wage will bump from $7 to $7.25 on Friday. That's only $15 more a week, but Sashi says she'll resist the temptation to go out to more dinners this summer and let the extra cash add up.

But her bosses are worried.

"Last time was 10 times busier in Ocean City, and we're just trying to tough it out," says Stephanie Hippler, one of the managers at the arcade. "Bad timing definitely, I would have to say, for us to up our payroll."

The arcade's general manager, Robyn Phillips, says the business has been keeping payroll down as much as possible this summer. She may have to find a way to offset Friday's wage increase by cutting back on hours and giving three days off instead of two days.

Just how businesses like this respond to the minimum wage hike is something economists will watch closely in coming months.

Living On The Edge

Marisa Purvis is just happy about what the wage raise means for her.

The 20-year-old is a student at Sam Houston State University in Texas. She has two $6.55-an-hour jobs that pay her way through school — one in the music department and another as a "car hop" at Sonic, the fast-food chain.

During the summer, she works an $8-an-hour job at a grocery store.

As of Friday, Purvis knows that at two of her jobs, she'll be making 70 cents more for each hour of effort.

Every little bit counts, she says, because she feels like she's living on the edge. None of her three jobs offer health insurance or benefits.

"It's always uncertain," she says. "Sometimes things will come up, and you have to put some of that money towards a flat tire you got. Or you may have to drive a lot because your family member is dying, and you have to spend that extra money on gas. You're only making $6.55. It's really stretching that penny."