Accessibility links
Diana Krall: A Method Actress, Trapped In A Jazz Singer For pop-jazz star Diana Krall — vocalist, pianist, mother of two young boys — to interpret a song's lyrics is to imagine and inhabit a new character within them. She took a break from touring (and parenting) to demonstrate to Steve Inskeep.

More on playing music for her children

Every Time We Say Goodbye

Singer and pianist Diana Krall is touring this summer. 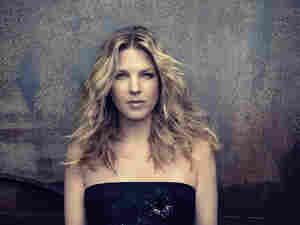 She's also touring with toddler twins she had with her husband, musician Elvis Costello. So only after making sure the kids had eaten lunch, she came to the Presidential Suite of the Mandarin Oriental Hotel in Washington, D.C., to speak with Steve Inskeep.

Krall became famous interpreting the hits of artists like Frank Sinatra and Ella Fitzgerald. In spite of a cold, she spoke at length about how she approaches others' songs.

"I'm always thinking about a character when I'm playing," she says. "I guess Joni Mitchell's 'A Case Of You' is something where I've — it's taken me 10 years to find my character in that so that I'm not just paying homage to Joni Mitchell."

Rather than simply play a song differently, she says she tries to "feel" it differently. On her latest album, Quiet Nights, her take on Antonio Carlos Jobim's "The Girl From Ipanema" becomes "The Boy from Ipanema."

"I think that my idea about singing it in 'Boy from Ipanema' was, returning to Brazil, you know, this 40-something woman ... thinking about her youth," Krall says. She played a riff from the song. "I did some press in England recently, and it was introduced as 'that '60s classic.' And it is a '60s classic, but there's something to it that's more than that. And I wanted to get there."

She demonstrated her version of the song at the grand piano in the suite. Afterward, in spite of her exhaustion, Krall had more to share.

"I'm on the road with 2-and-a-half-year-old boys who, before I came here, they wanted to go outside and play outside," she says. "They wanted to go down the slide. And I'm like, 'Where can I find a slide?' "

But for Krall, that gives her a renewed sense of purpose.

"We're moving house every day, and like I said, I'm probably as fatigued as I've ever been. But in some ways, it's that fatigue that gives you a strong sense of self — what you want to do [makes you] more relaxed, focused," she says.

Krall says she performs and plays recorded music for her children — "Pump It Up," by Costello, is one of their favorite songs, as is a certain Aaron Copland-esque passage from the Toy Story soundtrack; the theme she identified as "Buzz Is Going Fast" sends them into spaceflights of fancy.

"I have a friend who's an astronaut, and he's on the space mission right now for six months in the space station, sending me glorious pictures of the moon that I'm able to show my children," she says. "And all this goes into the music at night and the stories that I tell the audience.