Accessibility links
Study: Chimps Die From AIDS, Too Scientists were surprised to find that chimps infected with a close relative of HIV can die of AIDS. Previous studies suggested the simian virus caused little or no disease.

Study: Chimps Die From AIDS, Too

Study: Chimps Die From AIDS, Too 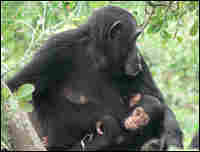 A chimp with her daughter in Gombe National Park, Tanzania. The chimp died in November 2006 from complications of a spinal cord injury. Tests showed that she had the simian immunodeficiency virus, which can cause AIDS in chimpanzees. Michael L. Wilson hide caption

A forerunner of the human AIDS virus may be killing certain chimpanzees in Tanzania, scientists report in the journal Nature.

A virus related to HIV, the simian immunodeficiency virus, is responsible for the deaths of the eastern subspecies of chimpanzee residing in the Gombe National Park, says a team of more than two dozen researchers, including famed primatologist Jane Goodall.

A nine-year study of the chimps in their natural habitat found that chimps infected with SIV had a death rate 10 to 16 times higher than uninfected chimps.

Tests on the 17 chimps that died during that period showed they had immune system irregularities, including low levels of CD4 cells, a type of cell that normally fights off infection and is also depleted in humans with AIDS. A control group of 77 chimps showed no irregularities.

Researchers say they're not sure if SIV is the cause of population declines in chimps in other areas of the world. Loss of habitat and other diseases are a significant factor in the decreasing number of chimps, says anthropologist Michael Wilson of the University of Minnesota and one of the researchers in the study.

"The last thing these chimps need is another source of mortality," Wilson told The Associated Press.

Chimps and humans probably caught these viruses in the same way — by eating infected monkeys, says another study author, Beatrice Hahn of the University of Alabama. And they probably spread the virus the same way, too — through sexual activity, she says.

For humans, the finding offers hope that AIDS research can be accelerated. Because HIV only causes disease in humans, and until now, SIV did not appear to cause disease, studies of AIDS have been limited to humans.

Writing in Nature, the researchers say that being able to study AIDS in an animal "could lead to novel therapeutic and preventive measures that will benefit both humans and chimpanzees."

From NPR and wire sources

Goodall Reflects On A Lifetime Of Chimp Research Nov. 14, 2008