Accessibility links
'Change' Party Rallies Ahead Of Kurdistan Election The autonomous Iraqi region of Kurdistan is experiencing something it's unaccustomed to: an election in which no one knows the results in advance. The election will have consequences for the tense standoff between Arabs and Kurds in Iraq — friction that threatens to derail the Obama administration's plan for an orderly withdrawal. 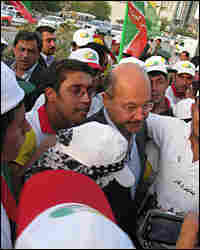 Iraq's Deputy Prime Minister Barham Salih is surrounded by supporters at a rally for the ruling Kurdish parties in Sulaimaniya. He's the PUK's leading candidate in the elections. Quil Lawrence/NPR hide caption 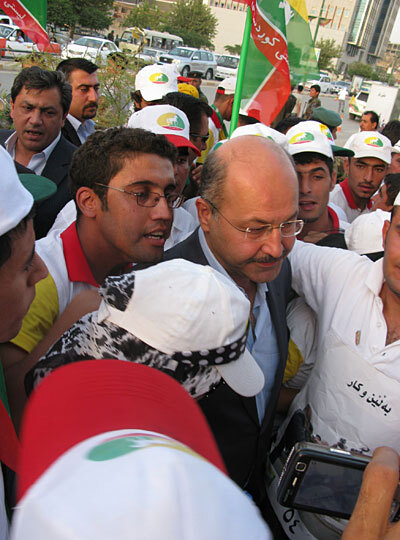 Iraq's Deputy Prime Minister Barham Salih is surrounded by supporters at a rally for the ruling Kurdish parties in Sulaimaniya. He's the PUK's leading candidate in the elections.

Late into the night in the Kurdish city of Sulaimaniya, young men are standing near a main intersection and shouting at the top of their lungs:

"Goran! Goran!" they yell at the passing cars. The word means "change" in Kurdish, and the many drivers who honk their horns in approval know that the activists are talking about the Change Party. The newly formed Kurdish political alliance has already lived up to its name in one respect — it's a major change that the Kurdistan Regional Government (KRG) is holding an election in which no one knows in advance what the results will be.

Watching as closely is the Obama administration, which needs a legitimate government in Kurdistan to have any hope of resolving the tensions between Iraqi Kurdistan and Baghdad. President Obama mentioned such ethnic tensions as a main focus in his discussions with Iraqi Prime Minister Nouri al-Maliki, who visited the White House on Wednesday.

'We Cannot Repeat The Same Mistakes'

That hasn't changed much for this election: The two parties decided to run in this election on the same ticket — a bit like Democrats and Republicans in the U.S. deciding to run together to make sure all the incumbents win. But the Change Party may have upset their tidy arrangement.

"We can not repeat the same mistakes committed by every revolutionary movement," says Mohammad Tawfiq, one of the dissident PUK leaders who split off to join the Change Party. "When they are in the movement, they behave, but once they get into power, [it] always corrupts."

A System Of Favors

It's not clear whether the Change Party is much of a threat in the more conservative areas of the north controlled by the KDP. But in Sulaimaniya, the PUK is clearly worried about a large protest vote. Talabani has flown home to campaign, all but abandoning his duties in Baghdad.

The deputy prime minister of Iraq, Barham Salih, is the PUK's leading candidate in the Kurdish elections. With Change breathing down his neck, Salih has been campaigning day and night, shaking hands and more.

"Kissing babies has come into Kurdish politics," says Salih, after an impromptu session of door-to-door politicking that lasted three hours. But Salih allows that it's not easy to change a culture that has always worked by patronage. Many people ask him directly for favors or jobs, but he says that's part of the system he wants to reform. Salih has a clean reputation, despite being part of a Kurdish establishment that critics say is rife with corruption.

"A kid ran up to me, and he was saying, 'I believe you're genuine, but can you deliver?' " Salih says. "That was a difficult question."

Salih's party has put out glossy posters and thrown lavish rallies, with loud music and cheerleaders on horseback. But even some supporters are happy to see a real horse race.

"The Change list has transformed this election," says Farhad Aladin, a businessman at one rally, who says he intends to vote for Salih and the combined KDP-PUK ticket.

"This election has forced the parties to come up with much better and more qualified candidates," Aladin says.

A Gamble For Salih

Still, along with competition comes risk. The KDP-PUK list will almost certainly win a majority in the new parliament, but if the Change Party does well, Salih could be in trouble. KDP officials have indicated that blame for the loss will land squarely on the PUK, and they may reconsider their deal to accept Salih as prime minister of the Kurdistan region.

It's a personal gamble for Salih, who could end up without the constituency to justify even his position as Iraq's deputy prime minister. Salih, who lived in Washington for most of the 1990s, is considered the Iraqi politician closest to the U.S. military and is often the first point of contact for American diplomats, who admit that he would be sorely missed in Baghdad. Some critics in Sulaimaniya are already predicting his descent.

"You Western guys pay so much attention to Barham Salih. The Americans give him a very big image — not the case in Kurdistan," says Asos Hardi, editor of the Sulaimaniya weekly newspaper, Awane. Salih was never a guerrilla fighter in the mountains, Hardi adds, which is still almost prerequisite for entering Kurdish politics.

There are other risks. Mohammad Tawfiq of the Change Party says many people fear that the traditional parties might rig the vote. He says Kurdistan has to look at least as democratic as the rest of Iraq.

"A couple of months ago, elections took place in the rest of Iraq for governorate councils. It was fairly free," Tawfiq says.

"So we have to be better than them, or at least to be equal. Otherwise, the government in Baghdad, in Ankara and Tehran would say, 'Didn't we tell you that the Kurds can not run their own affairs?' "

If there's even a perception of fraud during Saturday's vote, the neighbors won't be the only ones complaining.

At midnight in Sulaimaniya, rowdy Change Party supporters are still out in force, shouting at passing cars.

"If they don't respect us after that, it's a problem," says taxi driver Soran Ali, apparently drunk on more than enthusiasm for political reform. He says that if the Change Party doesn't win about 20 percent of the seats in parliament, the population won't accept it. Some Change Party members have hinted that there could be protests like after the disputed June elections in neighboring Iran.

International observers have already deployed to the Kurdistan region, and election results are expected early next week.