Accessibility links
Big-Beaked Toucans Play It Cool Animals often have brilliantly colored or large features that attract mates. Until now, scientists thought the toucan bill was just another one of those pretty characteristics. But it turns out the bill may have another purpose — cooling down the bird. 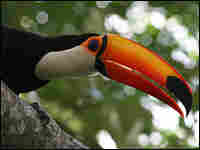 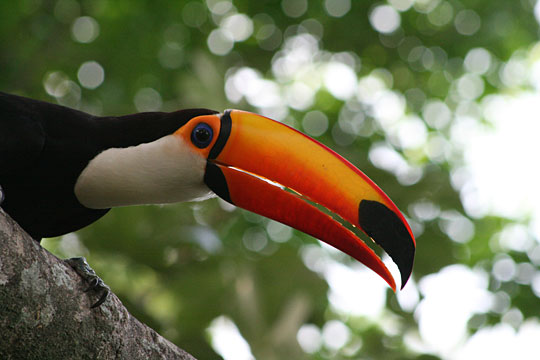 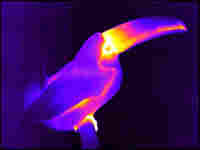 A toucan as seen with infrared thermography. The warmer areas are in yellows, and the cooler areas are purples. Courtesy of Glenn Tattersall hide caption 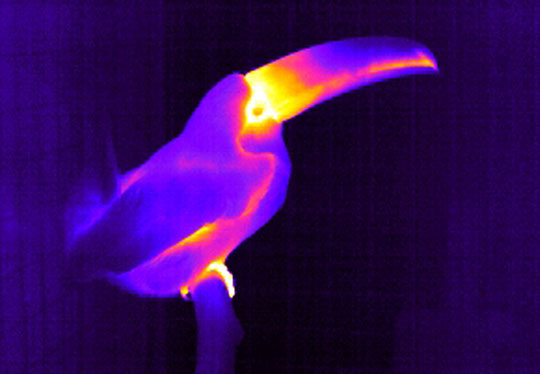 A toucan as seen with infrared thermography. The warmer areas are in yellows, and the cooler areas are purples.

If you've ever wondered what purpose the toucan's ungainly bill serves, here's a surprising new answer: A new report in Science Magazine concludes that the bill can work like your car's radiator.

The study's lead author is biologist Glenn Tattersall. He works at Brock University in chilly Ontario, so you can hardly be surprised that he tries to spend at least a month a year doing his field work in the tropics. Toucans have found a special place in his heart.

"You can't help but [look] at them and wonder what they're thinking, just having to cope with such a large bill," he says.

Toucans have the largest bills of any birds relative to their body size. Charles Darwin suggested the large and ornate bill was all about courtship. Others have suggested the long bill is a fruit-picking device, to improve the birds' reach up in the trees. But any field biologist who has ever held a toucan has noticed something else about the bill.

"If you held the bill, you could feel the warmth from it," Tattersall says.

That got him wondering. Could the bill actually be part of how toucans keep themselves at a comfortable temperature? To answer that question, he and his colleagues had to figure out whether toucans can turn their radiators on and off.

Elephants keep their cool by controlling blood flow to their ears, so this is not a crazy idea.

To find out, Tattersall decided to use his infrared camera — the same kind that the military and police use for night surveillance — to measure changes in heat flow from the toucan's bill.

In one experiment, Tattersall chased a bird around a large cage for about 10 minutes. He wanted to see whether its bill would heat up to keep the bird cool as it exerted itself. Indeed, the bill heated up as the bird flew around and helped the toucan stay cool.

But just because the bill functions as a radiator, that doesn't mean it actually evolved for that purpose. In fact, Tattersall doubts that it did. How, then, did the toucan get its bill?

"Sadly, we still don't have the answer to that question," he says.

That's really more a question for an evolutionary biologist — like Jason Weckstein at the Field Museum in Chicago. He agrees that the enormous bill probably did not evolve to keep the birds cool, even though it now serves that purpose.

"If birds really need radiators, why don't we see these crazy, wild, ungainly bills in birds that are living in similar environments to toucans?"

Weckstein says the bill may have evolved along with other social traits in toucans. It turns out that toucans tend not to be the go-along-and-get-along sort of creatures. Many are actually quite aggressive with one another — males and females. And Weckstein says gaudy, big bills are part of this shtick.

"Toucans that have the largest bills are the most social birds and most likely to have these aggressive displays," he says.

Weckstein studies not only toucans, but the lice that live on them. And here, he says, the bill is clearly a liability. "It turns out that big-billed birds are really bad at getting parasites off of them."

Why does Weckstein study toucan lice in the first place, you might ask? "That's what my wife always asks me," he replies with a laugh.