Accessibility links
Karzai Rivals Make Gains Ahead Of Afghan Vote Afghanistan's presidential campaign is heating up, and by some accounts incumbent Hamid Karzai is not a slam dunk for a second term. Still, it hasn't been easy for the 41 candidates to get out to meet voters and supporters because of security and financial woes. 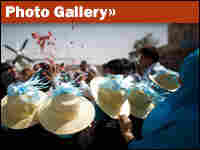 On The Afghan Campaign Trail

Afghanistan's second presidential election takes place on Aug. 20. About half of the country's estimated population — some 15.6 million Afghans — have registered to vote for the 41 candidates. Learn more about the elections and the three leading candidates. 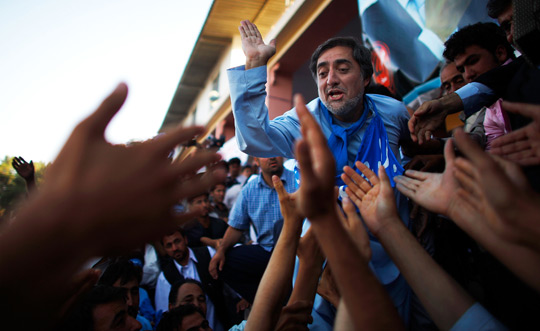 Voting for a president can be confusing in any country, and it's particularly confusing in Afghanistan, where 40 candidates are battling President Hamid Karzai for his job.

Four weeks before the polls, most Afghans still have no idea who is running or why the candidates want to be president. Most candidates aren't much help: Their outreach is limited to a smattering of posters and billboards featuring their unsmiling faces.

But some of the candidates have shifted into high gear, and it's beginning to show.

Thousands of men cheered and waved at a presidential candidate during his recent campaign trip to the city of Herat in western Afghanistan.

No one had predicted this kind of turnout. Even the man of the moment — Abdullah Abdullah — was surprised.

Hundreds more chased his convoy on motorbikes, hoping to catch a glimpse of the ophthalmologist turned politician.

Later, Abdullah reflected on the turnout.

"I have no doubt that people want change. It isn't that they didn't want change three months ago. They did want change at that time as well, but they weren't hopeful that this would come. Today, people are more hopeful," he says.

Voter interest is rising in many parts of Afghanistan these days, and not just at rallies for Abdullah, a former foreign minister who is widely viewed as Karzai's main opponent.

Even in some Taliban-rife areas, voters gather at clandestine rallies for candidates in people's homes or gardens. Many fear the militants who have vowed to disrupt the elections.

John Dempsey, head of the U.S. Institute of Peace's office in Kabul, notes that as recently as a month ago, he would have predicted an easy victory for Karzai.

"There didn't seem to be any viable alternative candidates. But recent indications show it may be a more competitive election than we had once thought," Dempsey says.

He says a competitive election shows that democracy is evolving in Afghanistan, and that its citizens believe they can change things by going to the ballot box — even now, when a growing number of Afghans don't believe their government can protect them from the Taliban or bring economic stability.

Take voters like Fuman Forough. On a recent night, the 18-year-old was at a small rally for Abdullah at a wedding hall in Herat.

The university freshman says she hasn't decided who to vote for yet. She wants a candidate who offers a sophisticated plan for ending insecurity and widespread unemployment.

Yet it's rare to hear any of the presidential candidates talk about their plans. Karzai's opponents spend much of their time criticizing the incumbent and ticking off the country's problems.

Karzai hasn't announced his agenda for his second term, either. Nor has he attended a single campaign event.

Waheed Omar, Karzai's campaign spokesman, says the president has always said his foremost responsibility is to run the country.

"He cannot afford to focus a lot on campaigning for the next re-election," Omar says.

Karzai's opponents complain that many government workers are doing the president's campaigning for him, something his spokespeople vehemently deny.

Some voters say they'll stay away from the polls unless candidates start delivering more substance.

Haji Kabir, a teacher in Kabul, likens this campaign season to the Afghan national sport of buzkashi, a game with few rules where players on horseback vie for a headless goat carcass.

On Thursday night, voters who tuned into Afghanistan's favorite TV network were treated to some of the substance that has been missing. The top opposition candidates — Abdullah and former finance minister Ashraf Ghani Ahmadzai — faced off for their first televised debate.

Karzai, who was also invited, refused to attend. His campaign says that Karzai felt too few candidates were involved. Nor does he like the television network, which he accuses of bias, hosting the debate.

The international coalition in Afghanistan — especially the United States — has made clear it is not backing any particular candidate. But the lack of substance is annoying to the United Nations, which is helping the country prepare for the elections on Aug. 20.

"The Afghan people deserve a choice here," says Aleem Siddique, a U.N. spokesman in Kabul. "And the reality is we're not seeing candidates lay out their manifestos for the future of the country at this critical juncture for this country."