Accessibility links
Twitter Seen As Tool For Social Change In China When Iranians used Twitter to get out news about their recent election, people took note in China. Compared with Iran, Twitter played a much smaller role in the recent ethnic clashes in western China. But many Chinese believe Twitter and its Chinese imitators, like Jiwai, have considerable potential to change their media and their society. 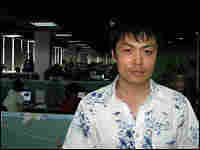 Li Zhuohuan, founder and CEO of Jiwai, a Chinese-language site similar to Twitter. On Thursday, Jiwai said it, like similar sites in China, was temporarily closed for maintenance. Anthony Kuhn/NPR hide caption 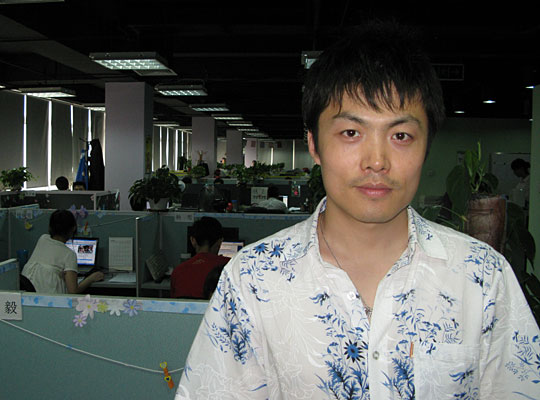 Li Zhuohuan, founder and CEO of Jiwai, a Chinese-language site similar to Twitter. On Thursday, Jiwai said it, like similar sites in China, was temporarily closed for maintenance. 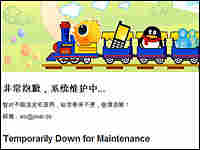 The Chinese micro-blogging site Jiwai indicates that it is temporarily out of order Friday. But also: "Don't worry. We will be right back." hide caption 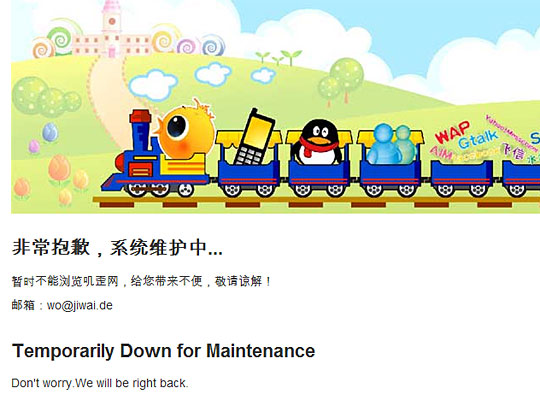 The Chinese micro-blogging site Jiwai indicates that it is temporarily out of order Friday. But also: "Don't worry. We will be right back."

Several Chinese NGOs recently held a training course in Beijing to teach citizen journalists how to use Twitter and other new media in their reporting.

The main speaker was one of China's better known Twitterati, Zhou Shuguang, who goes by the pen name Zola. Zola says that when he's reporting on politically sensitive stories, Twitter is not only a good reporting tool, but it can also protect him in case he gets detained.

"Citizen journalists will usually say at what time and what place they made their last move," he explains. "If they run into trouble, netizens or journalists can track them based on the final clues they leave."

Also speaking at the event was Ma Xiaolin. A former foreign correspondent with the official Xinhua News Agency, he now runs Bolianshe, an alliance of Chinese bloggers.

He says social media can be very empowering, but their importance has been exaggerated by traditional media's failures.

"The reason this kind of citizen behavior has exploded," he says, "is because our traditional media are out of place. They're not fulfilling their proper role and professional responsibilities. If they don't do it right, others will do it for them."

In the past couple of years, social media have played a significant role in breaking news on sensitive topics, including official corruption and civil unrest.

Traditional media are feeling the heat. China Central Television, for example, is planning the biggest revamp of its flagship evening news program in years. The Communist Party's main newspaper, the People's Daily, is expanding from 16 pages to 20 to provide more coverage.

But when bloody clashes between ethnic minority Uighurs and majority Han erupted in far west Xinjiang province on July 5, Twitter's impact was limited. The situation contrasted sharply with that in Iran, where Twitter was important in getting views about that country's election to the outside world.

Ismael An is a young tweeter in East China, and a member of China's Muslim Hui minority. He says Uighurs were either not online, or chose to remain silent.

"It was as if Xinjiang remained under a veil," he says. "After the Internet was cut, locals had an even harder time making their voices heard. Besides, those who understood the use of social media were not necessarily sympathetic to the Uighurs."

The official Xinhua News Agency reported on the violence within hours, considerably faster than it used to report on similar incidents. By the following morning, the government had cut all Internet service in Xinjiang province, with the notable exception of a press center for foreign and domestic journalists. The government said it was trying to prevent criminals and rioters from using the Internet to organize. Police later questioned Ismael about his writings expressing sympathy with disaffected Uighurs.

"They said my blog postings were inciting racial hatred," he recalls. "I think this was a false accusation. They were making a taboo of the ethnic minority issue and forbidding me to discuss my ethnicity and my Muslim brothers and sisters."

In recent months, China has blocked social media sites including YouTube, Facebook and Twitter. Some similar sites inside China have been forced to shut themselves down temporarily or face penalties.

As of Wednesday, one Chinese micro-blogging site called Jiwai was still running. Jiwai is a Chinese onomatopoeia suggesting babble or chatter. Its CEO, Li Zhuohuan, explains that his Web site is popular because it uses a Chinese-language interface, and users can post entries via cell phone text messages and instant messaging platforms. Twitter has no Chinese interface, and users have to message the U.K. to post an entry.

"Everyone knows that Chinese people's quantity and frequency of cell phone text messaging is very high," Li says. "China also has a large number of people using the QQ instant messaging software. Users like to share information with their friends in real time."

Li notes that as on Twitter, posts to Jiwai are limited to 140 characters. But Li points out that 140 Chinese characters contain double or even triple the expressive power of the same thing in English. Li adds that for now, most of his users are content to entertain themselves. But he says he hopes his Web site will be of more social significance in future.

"These are things that are harder to do," he admits. "But of course I hope that in the future, our government will give this kind of media their recognition, or even begin supporting and using it."

China's leaders like to surf the Web, but they're not tweeting yet.

Yesterday, Jiwai posted a notice that it too was temporarily closed for maintenance.

Media watchers believe Jiwai and other Chinese sites may reopen after the sensitive 60th anniversary of the founding of the People's Republic of China on Oct. 1.