Accessibility links
Single Payer: The Health Care Plan Not On The Table Many of the world's industrialized countries have a single-payer health care system, in which government administers all medical care. Support for such a system exists in the U.S.; even President Obama has expressed admiration for it. Yet it is absent from the debate. 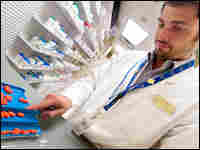 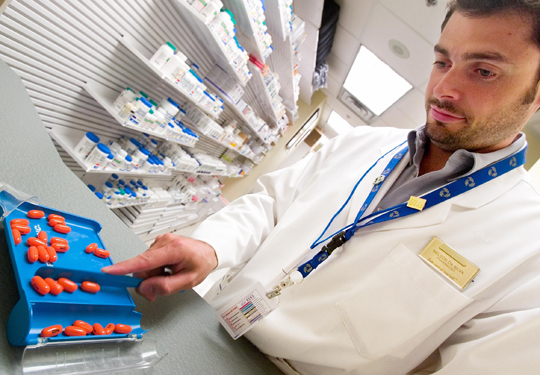 A doctor dispenses drugs at Toronto General Hospital. Canada is one country that has a single-payer health insurance system, which provides universal health care.

NPR's Julie Rovner reports on another proposal that's being sidelined in the current health care debate on Capitol Hill – the Health Americans Act, sponsored by two senators who believe they may be too junior to get attention for their bill.

Just about every time President Obama holds a town hall meeting, someone asks about the health care plan that's not under consideration.

"Why have they taken single-payer off the plate?" Linda Allison wanted to know during a New Mexico forum in May.

By now, the president has a stock answer for those who want to replace the current system of employer-based health insurance with a single-payer plan in which the government pays all medical bills.

"If I were starting a system from scratch, then I think that the idea of moving towards a single-payer system could very well make sense," Obama said. "That's the kind of system that you have in most industrialized countries around the world. The only problem is that we're not starting from scratch."

Obama argues that shifting to a single-payer system would be too disruptive for the $2.2 trillion health care industry. That view is shared by most of the policymakers now running the health care debate, but not by U.S. Rep. Dennis Kucinich, a Democrat from Ohio.

"We're not starting from scratch," Kucinich said. "We're starting in a ditch. And the ditch is that Americans are being driven into poverty by a health care system that is for-profit."

Kucinich co-sponsored legislation that would expand the government-funded Medicare program to cover all Americans, not just those aged 65 and older. Kucinich made single-payer health care a cornerstone of his own quixotic presidential campaign.

"One out of every three dollars in our current health care system goes for corporate profits, stock options, executive salaries, advertising, marketing, the cost of paperwork," Kucinich said. "If you took the money that's being wasted and put it into a not-for-profit system, you'd suddenly have enough money to cover every American."

Health care experts agree that switching to a single-payer system would sharply reduce administrative costs. But wary lawmakers instead focused on a more incremental approach.

"We have a system in place that's based on private insurance," said Peter Harbage, a health care fellow at the Center for American Progress, a Washington think tank. "And what I think we see in health care reform is an effort to build on what works and fix what doesn't."

Never On The Table

Harbage disputes the idea that a single-payer plan was taken off the table. "It just never really was put on the table. It was never discussed as fully as some of these other ideas we see being discussed now," Harbage said.

Senate Finance Committee Chairman Max Baucus, a Democrat from Montana, admitted to The New York Times last month that it may have been a mistake to rule out single-payer health care, if only because having it on the table would make the president's public insurance option seem moderate by comparison.

"Sooner or later, some state is going to break through in a major way with a single-payer initiative," Kucinich said.

But that means a state would have to be willing to do what the federal government would not: start from scratch.