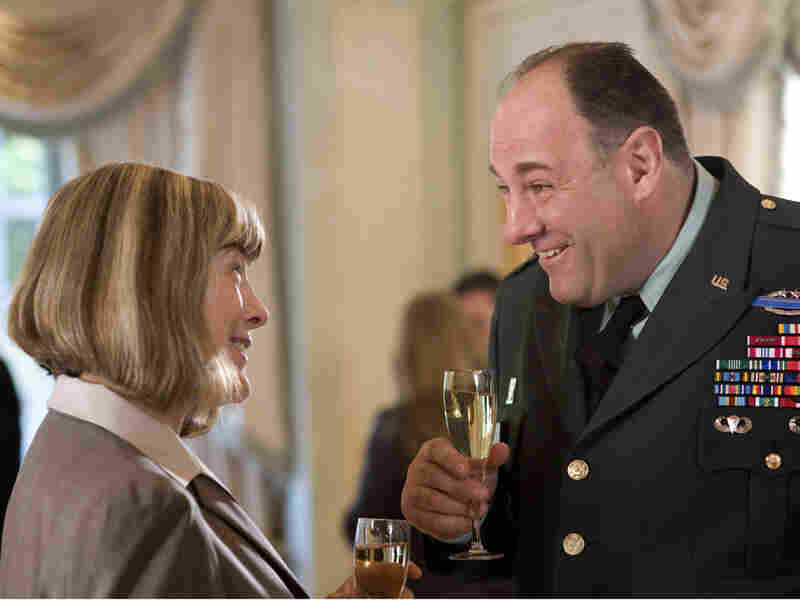 War is not their answer: Mimi Kennedy's dovish diplomat and James Gandolfini's alpha-male general form an unlikely alliance in In the Loop, trying to head off a seemingly unavoidable conflict. Nicola Daval/IFC Films hide caption 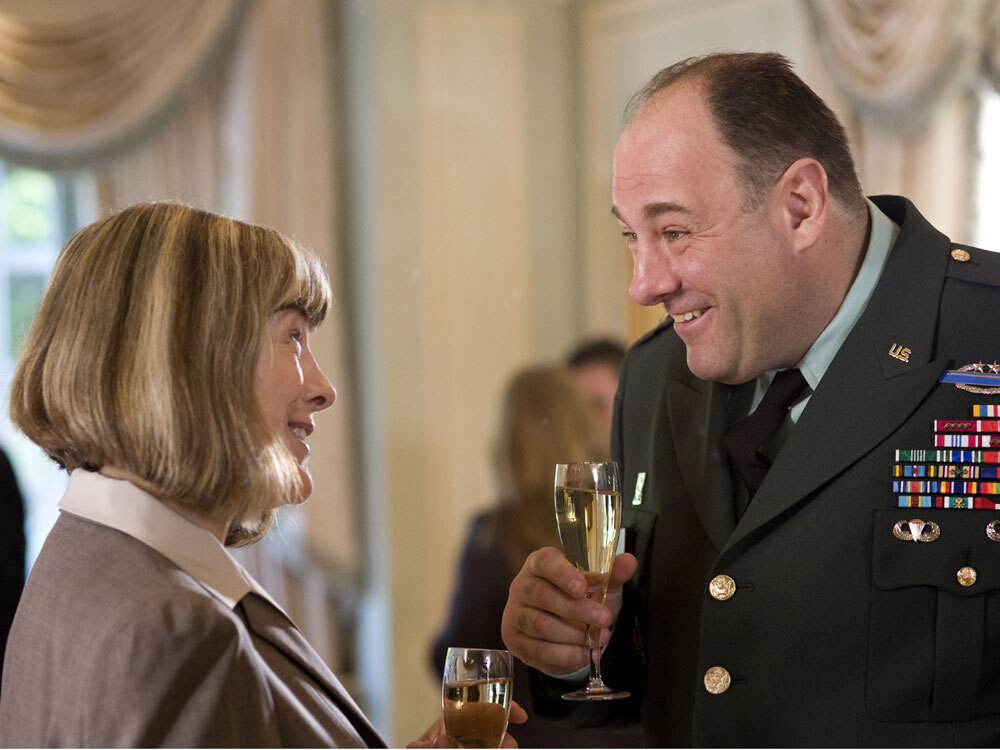 War is not their answer: Mimi Kennedy's dovish diplomat and James Gandolfini's alpha-male general form an unlikely alliance in In the Loop, trying to head off a seemingly unavoidable conflict.

Note: These clips contain language that may be inappropriate for some audiences. 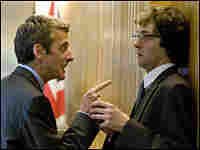 Some critics have suggested that In the Loop is too cynical, but the film demonstrates how penetrating farce can be: madcap on the surface, brutally sane beneath. IFC Films hide caption 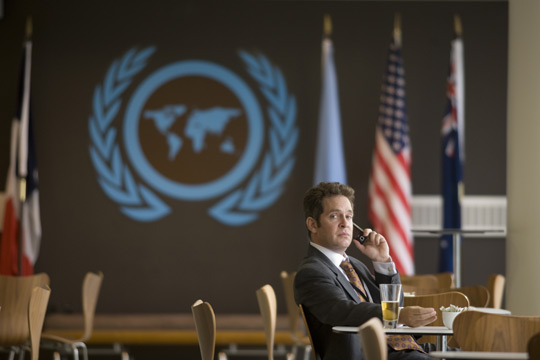 Some critics have suggested that In the Loop is too cynical, but the film demonstrates how penetrating farce can be: madcap on the surface, brutally sane beneath.

With its wild machinations, the riotously potty-mouthed British political satire In the Loop seems totally outlandish. But according to some reports, it's more or less what happened in the days leading up to the U.S. invasion of Iraq: The Brits were indeed drafted to supply intelligence to help the Bush administration make its case to the U.N. Security Council — and according to one leaked Downing Street memo, "intelligence and facts were being fixed around the policy."

Inspired by that memo, director Armando Ianucci has concocted a rollicking transcontinental farce, a policy-wonk version of The Front Page, with characters flying back and forth between London and Washington and enough four-letter scatological invective to make David Mamet say, "Whoa, that's a tad excessive." You'll be laughing so hard you might not notice the undercurrent of horror creeping in.

The movie uses characters from Ianucci's Brit TV comedy In the Thick of It, starring the Scottish actor Peter Capaldi as a relentlessly abusive government press secretary named Malcolm Tucker. (He's based on Alastair Campbell, who did the job for Tony Blair.)

As the film opens, Tucker is listening to a radio interview with a minor government minister named Simon Foster, played by Tom Hollander; and Simon stammers something about the war in the Middle East being "unforeseeable." And as harmless as that locution seems, it drives the British prime minister (who goes unnamed) and his executioner, Malcolm, into obscenity-laced fits of apoplexy.

You'd hardly recognize Capaldi from his most famous movie role, as Peter Riegert's lovelorn Scottish assistant in the sublime 1983 comedy Local Hero. The cords in his neck stand out as he roars, and he shows up everywhere, fulminating, threatening, blackballing, blackmailing. Against him, idealists don't stand a chance.

And neither does Simon, who tries to backpedal from that "unforeseeable" line — but who does like the attention. He gets drafted as an ally by the dovish U.S. Assistant Secretary for Diplomacy, Karen Clarke (Mimi Kennedy) — who's locked in a battle with a hawkish State Department official based on top Cheney aide David Addington and played, with delicious smug pomposity, by David Rasche.

The movie is crammed with characters and details, the actors playing it straight but at farcical speeds, leaping back and forth from the minutiae of protocol to problems with their teeth to one-night stands to leaking documents or plugging leaks.

In the Loop's loopy ensemble includes the pert Anna Chlumsky as Clarke's policy aide, who drafts a highly inconvenient paper on the prospect of war in which the cons far outweigh the pros, and James Gandolfini as an alpha-male general who's nonetheless dead-set against war: He's the only one who has seen soldiers die.

They're all stupendous, but it's Mimi Kennedy — best known as Dharma's mom on the sitcom Dharma and Greg — who blew me away. She has the doggedness of a true political animal; she has ideals, but she knows how the game must be played.

Some critics have suggested that In the Loop is too cynical, too committed to the idea that politicians and policy-makers are either hopelessly ineffectual or downright venal. But I would submit that the lead-in to the war in Iraq was an extraordinary case, a moment when almost no one, in retrospect, looks good.

And the filmmakers don't depict the war's principal architects — or even mention Blair, Bush, Cheney, Rumsfeld or Colin Powell by name. Instead we see their minions in a kind of kabuki ritual, going through the motions, the conclusion predetermined. In the Loop demonstrates how penetrating farce can be: madcap on the surface, brutally sane beneath.