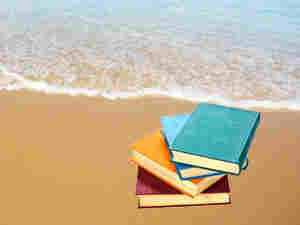 People talk a lot about the wisdom of crowds, but the truth is that large packs of people are better at judging some things than others.

Almost 16,000 of you cast some 136,000 votes in our Best Beach Books Ever poll. Whether such a vote can determine literary quality, who can say? But there's one thing a multitude of book-loving NPR types can most definitely do, and that's pick a list of books that will appeal to... book-loving NPR types.

Which means, if you're reading this, you stand an excellent chance of finding the book that will make your summer vacation among the 100 audience favorites below. Happy travels!

1. The Harry Potter series, by J.K. Rowling
2. To Kill a Mockingbird, by Harper Lee
3. The Kite Runner, by Khaled Hosseini
4. Bridget Jones's Diary, by Helen Fielding
5. Pride and Prejudice, by Jane Austen
6. Divine Secrets of the Ya-Ya Sisterhood, by Rebecca Wells
7. The Great Gatsby, by F. Scott Fitzgerald
8. The Hitchhiker's Guide to the Galaxy, by Douglas Adams
9. Fried Green Tomatoes at the Whistle Stop Cafe, by Fannie Flagg
10. The Poisonwood Bible, by Barbara Kingsolver

21. The Adventures of Huckleberry Finn, by Mark Twain
22. The Bean Trees, by Barbara Kingsolver
23. The No. 1 Ladies' Detective Agency, by Alexander McCall Smith
24. The World According to Garp, by John Irving
25. Catch-22, by Joseph Heller
26. The Prince of Tides, by Pat Conroy
27. Like Water for Chocolate, by Laura Esquivel
28. The Princess Bride, by William Goldman
29. The Accidental Tourist, by Anne Tyler
30. Twilight, by Stephenie Meyer

41. Pillars of the Earth, by Ken Follett
42. Anna Karenina, by Leo Tolstoy
43. Interview with the Vampire, by Anne Rice
44. Cold Mountain, by Charles Frazier
45. Empire Falls, by Richard Russo
46. Under the Tuscan Sun, by Frances Mayes
47. The Count of Monte Cristo, by Alexandre Dumas
48. Even Cowgirls Get the Blues, by Tom Robbins
49. I Know This Much Is True, by Wally Lamb
50. Murder on the Orient Express, by Agatha Christie

51. Little Women, by Louisa May Alcott
52. The Stand, by Stephen King
53. She's Come Undone, by Wally Lamb
54. Dune, by Frank Herbert
55. The Guernsey Literary and Potato Peel Pie Society, by Mary Ann Shaffer and Annie Barrows
56. Love in the Time of Cholera, by Gabriel Garcia Marquez
57. Alice's Adventures in Wonderland, by Lewis Carroll
58. Lolita, by Vladimir Nabokov
59. The Godfather, by Mario Puzo
60. A Tree Grows in Brooklyn, by Betty Smith

61. Animal Dreams, by Barbara Kingsolver
62. Jaws, by Peter Benchley
63. Good in Bed, by Jennifer Weiner
64. Angle of Repose, by Wallace Stegner
65. Snow Falling on Cedars, by David Guterson
66. The Old Man and the Sea, by Ernest Hemingway
67. The Fountainhead, by Ayn Rand
68. Breakfast of Champions, by Kurt Vonnegut
69. Cat's Cradle, by Kurt Vonnegut
70. The Big Sleep, by Raymond Chandler

71. The Sun Also Rises, by Ernest Hemingway
72. The Hunt for Red October, by Tom Clancy
73. Cold Sassy Tree, by Olive Ann Burns
74. The Lord of the Flies, by William Golding
74. Bonfire of the Vanities, by Tom Wolfe [tie]
76. Wuthering Heights, by Emily Bronte
77. Outlander, by Diana Gabaldon
78. The Shell Seekers, by Rosamunde Pilcher
79. Prodigal Summer, by Barbara Kingsolver
80. Eye of the Needle, by Ken Follett

81. Cannery Row, by John Steinbeck
81. The Pilot's Wife, by Anita Shreve [tie]
83. All the Pretty Horses, by Cormac McCarthy
84. The Girl with the Dragon Tattoo, by Stieg Larsson
85. The Little Prince, by Antoine De Saint-Exupery
86. The Road, by Cormac McCarthy
87. One for the Money, by Janet Evanovich
88. Shogun, by James Clavell
89. Dracula, by Bram Stoker
90. The Unbearable Lightness of Being, by Milan Kundera

91. Presumed Innocent, by Scott Turow
92. Franny and Zooey, by J.D. Salinger
93. The Secret History, by Donna Tartt
94. Dead Until Dark, by Charlaine Harris
95. Summer Sisters, by Judy Blume
96. The Shining, by Stephen King
97. How Stella Got Her Groove Back, by Terry McMillan
98. Lamb, by Christopher Moore
99. Sick Puppy, by Carl Hiaasen
100. Treasure Island, by Robert Louis Stevenson