Accessibility links
Starbucks Shuns Name At New Cafe Starbucks opened a new kind of outlet Friday in Seattle's Capitol Hill neighborhood that has almost no trace of its link to the corporate coffee giant. The store, called 15th Ave. Coffee & Tea, has an expanded menu that includes wine, beer and cheese platters. 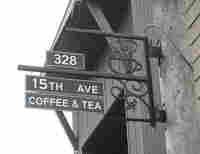 15th Ave. Coffee & Tea in Seattle is a new cafe that Starbucks opened without branding it with the company's name or logo. Wendy Kaufman/NPR hide caption 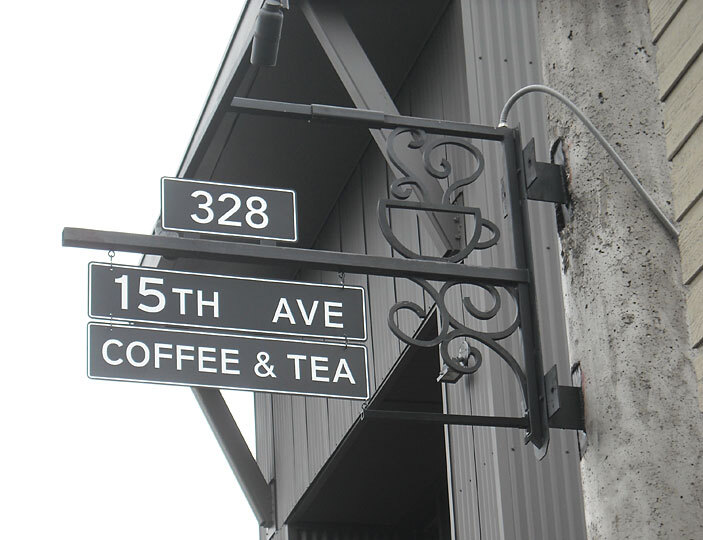 15th Ave. Coffee & Tea in Seattle is a new cafe that Starbucks opened without branding it with the company's name or logo. 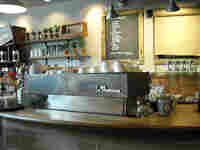 The interior of a new cafe created by Starbucks bears little resemblance to the Starbucks that have cropped up across many towns and cities nationwide. Wendy Kaufman/NPR hide caption 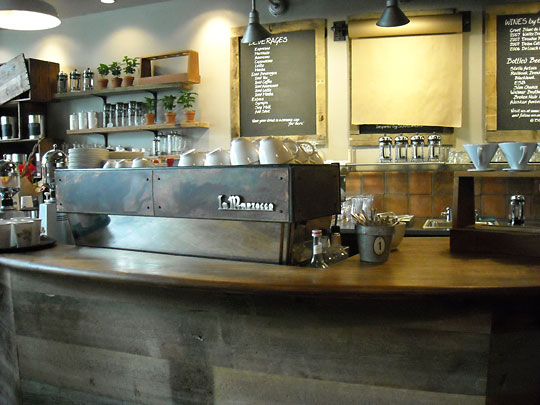 The interior of a new cafe created by Starbucks bears little resemblance to the Starbucks that have cropped up across many towns and cities nationwide.

Before the recession, it came as no surprise to see new Starbucks locations cropping up all over the place with the familiar corporate name and logo plastered on everything from signs to coffee cups.

But the coffee giant opened a new kind of store Friday in Seattle's Capitol Hill neighborhood that has almost no trace of its link to Starbucks. Aside from the small print on the door that reads "inspired by Starbucks," there's little hint that 15th Ave. Coffee & Tea is owned by the worldwide chain.

For more than three decades Starbucks has been building a brand, spreading its name around the globe. Now the company is setting aside that corporate image as it tries to create a store with the vibe of an independent neighborhood cafe.

Customers can grab and go, or sit in this spare and sophisticated space that looks and feels more like a wine bar than a coffee shop. And the menu is also different, including wine and beer along with cheese platters and other fare.

The coffee beans will be of the Starbucks variety, but they will be roasted in smaller batches, which often provide better quality than those roasted in larger quantities.

The new concept is a "re-imagination" of Starbucks, Cohen says.

"Customers will be surprised. They are going to be shocked," he says. "We hope they come in and discover new things about Starbucks; and that they have a different perception of Starbucks, better I hope. But they will have a sense that we are presenting ourselves differently here."

Cohen brushes aside the suggestion that the new cafe exposes some of the weaknesses of the old. But even company CEO Howard Schultz has bemoaned that Starbucks had lost its soul. It's hard to retain it when you have more than 15,000 stores.

Many ideas for the new cafe came from within Starbucks. But for other ideas, Starbucks employees went on observation missions, visiting lots of local, independent cafes.

Sebastian Simsch, co-owner of Seattle Coffee Works, says Starbucks scouts visited on three separate occasions. While he was flattered, he wonders what exactly they were looking for.

"We are a coffee house. Coffee houses have been around for centuries," he says. "What are we doing that they can't figure out on their own?"

The addition of alcoholic beverages and entertainment in the new cafe allows Starbucks to maximize its real estate, says brand consultant Scott Bedbury, the founder of Brandstream. By providing food and entertainment at night, the cafe will draw in customers when it would otherwise be empty, he says.

Bedbury, who worked at Starbucks for many years, likes the 15th Ave. concept for another reason. Starbucks, he says, expanded too far and too fast. Now, if it wants to grow it will have to move in a different direction.

"Every brand has a stretch point. I call it the Spandex rule: You can only push so far, so wide and so fast," he says. "If companies want to grow, they have to create a second brand or even a third."

What do consumers think of the new cafe so far? Neighborhood resident Penny Lane says she likes the sophisticated, urban style. But Eric Fleish, who was visiting from Boston says, "It's insidious for Starbucks to masquerade — to trick the people who are specifically boycotting Starbucks into going into their place anyway."

For now, at least, Starbucks only plans to expand the new concept with two additional cafes in Seattle.