Accessibility links
Kayaking To A Different View Of The Rio Grande The Rio Grande is far more than a border between the United States and Mexico, and it's more than a barrier to illegal immigrants and drug smugglers. To one man who lives in the borderlands, the river is a kayaker's paradise. 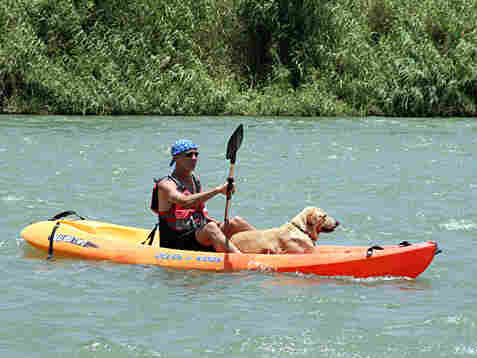 For more than 1,200 miles, the Rio Grande defines a boundary between two tense global neighbors — Mexico and the U.S. Its reputation for lawlessness makes it easy to forget that it's also a scenic river with birds, lush plants and even a little whitewater.

That's the message that Eric Ellman, executive director of Los Caminos del Rio, wants to get out to the world.

One Paddle At A Time

For two years, Ellman has offered kayak trips on a stretch of river that begins on a Class 2 rapid below an irrigation dam.

"This is about as good a teaching rapid as I can imagine," he says, while paddling into a riffle with his yellow lab, Buster, lying blissfully in the front of his kayak. "You can see all this beautiful clean water just sweeping right at you. There's a little wave; you can get on it, get off it. Go back in this eddy. Try it again."

Ellman is an outdoor fanatic, travel writer and former New York City bicycle messenger who, at 52, finds himself amid the grapefruit orchards and taquerias of South Texas, promoting tourism on the Rio Grande. When he arrived in 2000, he found the cool river that bisects this sweltering land to be inviting, but no one else did.

When the locals realized that gators were not swallowing kayaks, and the water is relatively clean, Ellman encountered enthusiastic support on both sides of the border.

"Perhaps Mexicans on this side think of the river as a barrier that's more mental than physical," says Jeffrey Salcedo, a business promoter with the Mexican city of Reynosa, and a backer of Ellman's. "Because when we cross the river, we're accustomed to being detained and questioned. It's not so difficult to change this mentality because these water sports have been very successful. We just need to promote them."

And things are happening. Last November was the first annual Big River Festival on the lower Rio Grande, featuring canoe races with 40 competitors from both countries.

Now the cities of Laredo and Nuevo Laredo, upstream, are sponsoring a 33-mile canoe race on their stretch of river as part of RioFest in October. Ellman says he learned, to his surprise, the federal agencies that control and patrol the river welcomed boaters.

"And it demonstrated to everybody who was watching that this is not only possible but it's actually something that the powers that be encourage," he says.

Eyes In The Air

For its part, the U.S. Border Patrol is in favor of private watercraft on the Rio Grande, believing the more good people who use the river, the fewer bad people are likely to.

Sonny Montes, a small-business owner, recently moved from Seattle back to the Rio Grande Valley, where his family has lived for 150 years. Now he's a regular paddler down here on the river.

Asked what kind of reaction he gets from people in the Valley when he tells them he's going down to the river to kayak, Montes says they call him crazy.

"But you know what I tell 'em?" he asks. "I tell 'em we have the best security in the world because the Border Patrol has patrols in the air. They have patrols in the river, and they have eyes along the border."

The organization of which Eric Ellman is director, Caminos del Rio, has long sought recognition of the cultural and historic importance of the lower Rio Grande. Earlier this month, Rep. Henry Cuellar, a Democrat from the Rio Grande Valley, asked Congress to declare the riverlands from Laredo to Brownsville a National Heritage Corridor.

But try as they might to make the Rio Grande a tourist destination, it remains the world's busiest border for drug smuggling, and that fact is unforgettable on the water.

As evidence, a 16-year-old avid kayaker named Casey Richardson balances on top of the cab of a black pickup truck submerged in the gentle current.

It's one of at least 30 sunken drug vehicles ditched by traffickers that have been identified in this stretch of river. Rio Grande visionaries hope that one day, there might be more kayakers than drug smugglers.