Accessibility links
U.S. Aims In Afghanistan Hinge On Election Afghan President Hamid Karzai could face serious competition in his bid for re-election. A surge in support for his rivals means the U.S. could be dealing with new leadership as it builds up American forces in Afghanistan to counter the Taliban. 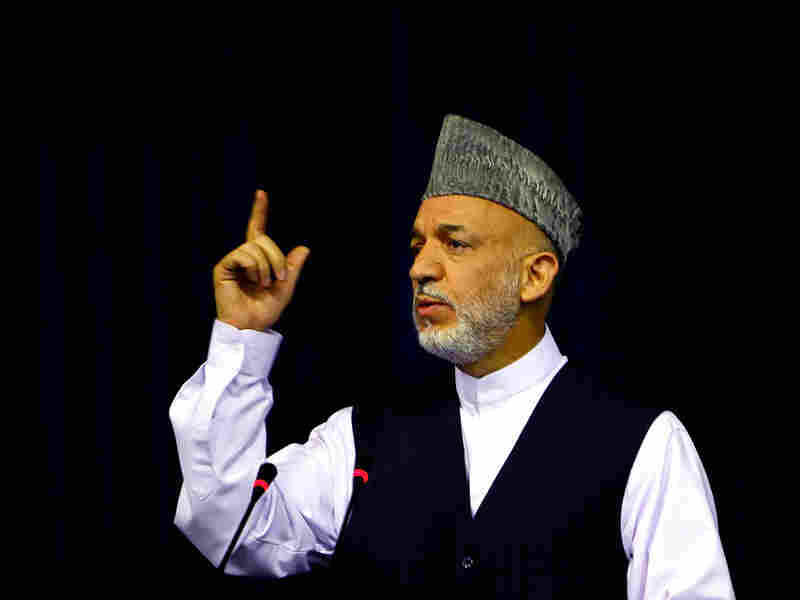 August's presidential election in Afghanistan could be more competitive than many observers have been predicting. For months, it seemed that President Hamid Karzai was virtually certain to win re-election, but an apparent recent surge in support for two of Karzai's rivals has opened the prospect that he could be forced into a runoff.

That raises a question for U.S. policymakers: what if Karzai — long thought of as America's man in Afghanistan — were to lose? 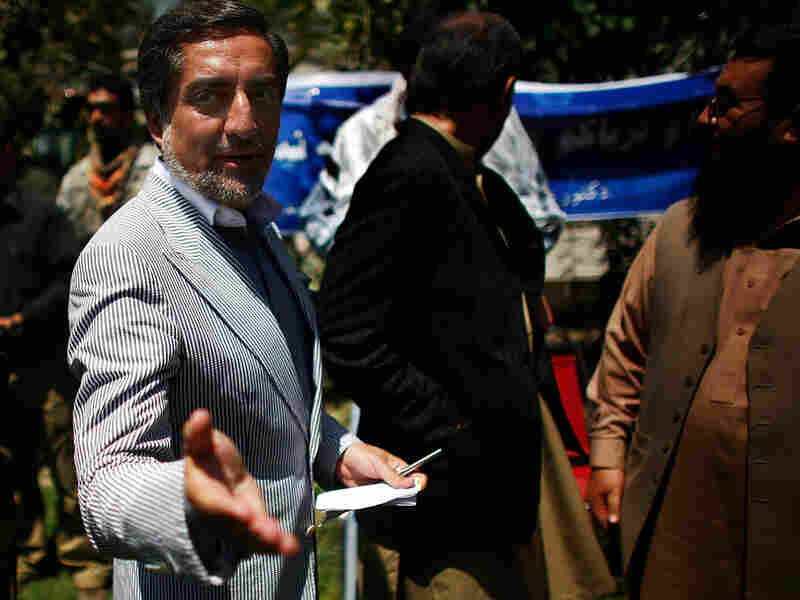 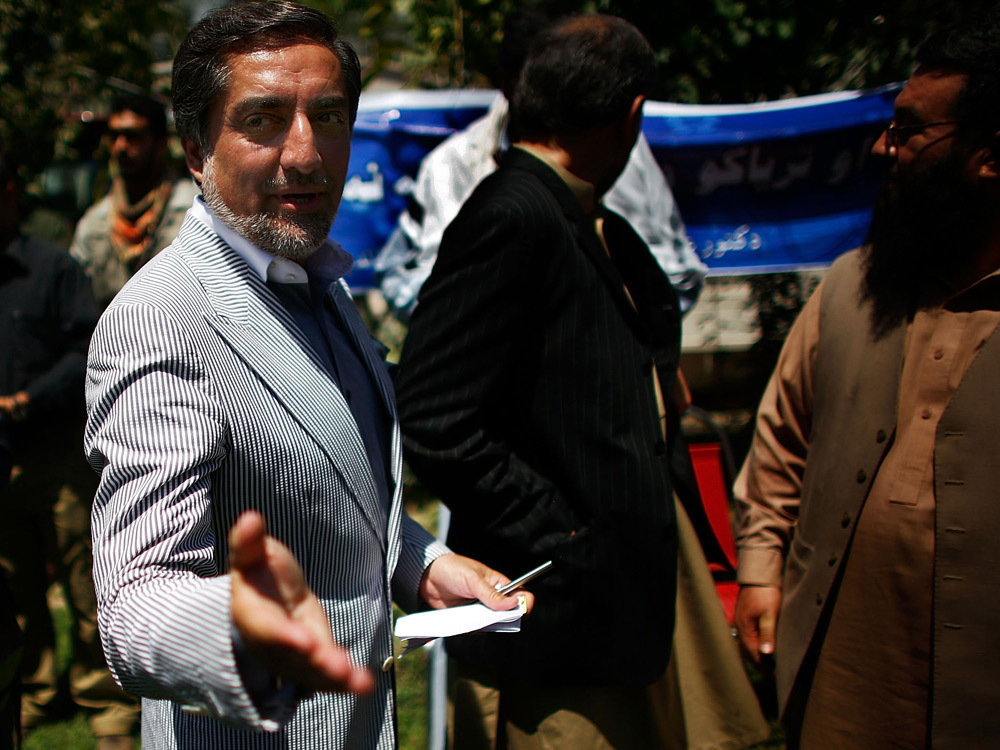 Analysts say the prospect would not necessarily cloud U.S. objectives in Afghanistan and could even strengthen the public perception of America among Afghans. The level of government corruption associated with Karzai and his administration has many Afghans angry.

"If you have an election that's a real horse race and it goes to a second round, Afghans are going to see that as a victory for democracy for their country," says Bruce Riedel, a senior fellow at the Saban Center for Middle East Policy at the Brookings Institution.

Alexander Thier, a senior adviser at the U.S. Institute of Peace, says "the Afghan people are skeptical because of our long and uncritical support" of Karzai.

The sense that Karzai might be vulnerable has grown in the past two weeks, based on popular response to the campaigns of Abdullah Abdullah, Afghanistan's former foreign minister, and former finance minister Ashraf Ghani Ahmadzai.

Abdullah, an ophthalmologist, has drawn much larger crowds than expected as he has campaigned in six Afghan provinces. With backing from the main opposition party, the National Front, Abdullah has been advocating political reform that would decentralize the government and return some power to the provinces.

Ahmadzai, a former finance minister, is an American-educated economist with a reputation for being willing to stand up against pervasive government corruption. The former World Bank official is promising to end government cronyism and build a dynamic economy.

Can Any Rival Defeat Karzai's Money?

Selig Harrison, director of the Asia Program at the Center for International Policy, says no one should be too quick to assume that either rival can defeat Karzai.

"I think he's likely to be elected, possibly in a run-off," he says of the incumbent. "Karzai is working with a lot of people who have enough money to win the election — the old warlords who've accumulated a lot of ill-gotten U.S. cash."

Anthony Cordesman of the Center for Strategic and International Studies, who just returned from Afghanistan, warns that poll numbers in Afghanistan are unreliable, offering little more than "a dim indication" of public opinion.

But Cordesman says he encountered widespread dissatisfaction with Karzai's government, which is derided by critics as "Kabulstan" — with all power centered in the capital, Kabul, and little control over or regard for the provinces.

"It's like Tammany Hall," says Cordesman, referring to name given the corrupt political dynasty that controlled New York in the 1800s and early 1900s. Cordesman says the government is widely seen as trying to buy the election. "Karzai is frightened," he says, by the apparent strength of his opponents, and "he's done a lot to make deals, to promise government positions and governorships" in exchange for support.

If Karzai's rivals make any kind of showing, though, it would be a good thing, Riedel says. "A contested election would provide more legitimacy to the Afghan government than a lopsided victory by anyone."

Riedel says both Abdullah and Ahmadzai are "serious alternatives, either of which you could envision as the next president of Afghanistan."

The prospect of violence associated with the election is high, but analysts say that it should not hamper the process.

Asked whether a runoff or a disputed result could trigger even more bloodshed in Afghanistan, Riedel said, "Afghan politics have been less fiery than people sometimes threaten they will be."

Riedel points out that, in March, outside observers were concerned that violence would erupt over an Afghan Supreme Court decision that Karzai's term could be extended by three months to make up for a delay in holding elections.

"In the end, the Afghans worked it out," Riedel says.

Riedel helped shape the Obama administration's policy when he worked on a strategic review of Afghanistan and Pakistan policy last winter. "We laid out a policy line that the U.S. would not have a candidate. This ought to be an Afghan choice," he says.

Thier, at the U.S. Institute of Peace, agrees that the U.S. is "genuinely open" to the candidacies of the two major contenders. He says that the administration's biggest concern with the Karzai government now is corruption and a culture of impunity among people with political influence.

Thier says a competitive election would benefit the image of the U.S. in the eyes of the Afghan public. He says U.S. Ambassador Karl Eikenberry and the president's special envoy to the region, Richard Holbrooke, have tried to distance themselves from Karzai.