Accessibility links
Thirty Years of 'Roots' In 1977, a TV mini-series based on Alex Haley's groundbreaking book Roots exposed an ugly side of American history: slavery. Both the book and mini-series have been re-released to mark the film's 30th anniversary. Bill Haley, a writer and son of Alex Haley, and Juliet Walker, a history professor at the University of Texas in Austin, talk to Farai Chideya about the lasting impact of the book.

In 1977, a TV mini-series based on Alex Haley's groundbreaking book Roots exposed an ugly side of American history: slavery. Both the book and mini-series have been re-released to mark the film's 30th anniversary. Bill Haley, a writer and son of Alex Haley, and Juliet Walker, a history professor at the University of Texas in Austin, talk to Farai Chideya about the lasting impact of the book. 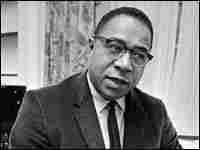 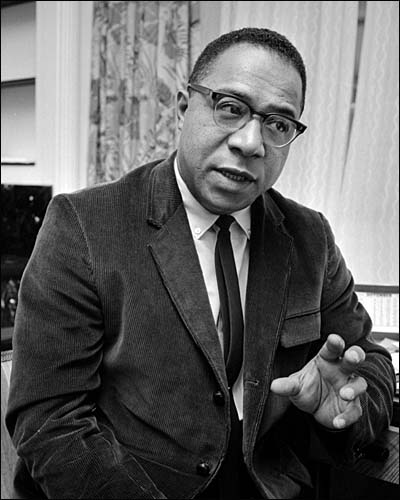 Some rap emcees or modern day Griot, a West African word for storyteller. And through NEWS & NOTES partnership with StoryCorps, we air your family stories and histories in our Griot Project.

But let's go back now to 1977, when a lot of black folks were looking for their ancestry but didn't know where to turn. That's the same year that writer Alex Haley saw the miniseries adaptation of his best seller "Roots" hit TV screens.

His "Roots" follow Kunta Kinte, a native of Gambia and his descendents as they survived slavery in America. Haley didn't hold back on showing how slavery impacts all Americans. The book garnered Haley a Pulitzer Prize and the television broadcast won 130 million viewers. Still, the most ever for a mini series.

Now, both the book and film had been re-released in honor of the films 30th anniversary. Here with me today is Bill Haley, a writer and son of Alex Haley. We've also got Juliet Walker, a history professor at the University of Texas, Austin. She founded the Center for the Study of Black Business History entrepreneurship and technology. And welcome to you both.

CHIDEYA: So, Bill, I understand it took your father more than a decade to write "Roots". What was his research project like and, and was it a challenge for him to get published?

Mr. HALEY: well, his research project went on for, really, 20 years. Because he had started writing stories about the family that found their way into "Roots", the book that you know is "Roots", in 1950s. He didn't have a lot of difficulty in publishing it. He had a lot of difficulty in finishing it. Because he sold it to "Reader's Digest" right away. It's just that he had to put the characters and everything together. They help fund it. In 1967, he had done most of the research and the outline for "Roots" was submitted in June of that year.

CHIDEYA: So do you remember this process yourself? What your father was going through?

MR. HALEY: sure. He would - actually other people in the family and he and my grandfather used to tell us the stories. And he sort of egged him on, get your father to write the story about our family. The funny thing was that my grandfather - since my father's mother had died - sort of carried on the roots tradition. Although he was much prouder that his mother was clean and used to come and embarrass us in school, in black schools, by telling my classmates that we were related to Coronal Jim Jackson at Confederate(unintelligible) Army.

CHIDEYA: Now, I want to ask you before moving on to Juliet. Bill, what do you remember about first hearing the story of Kunta Kinte? It's, it's one of those things where I remember that people would, you know, people took great pride in the miniseries, in the book, but also young black kids - at least where I grew up with - had also used Kunta Kinte as a kind of put down. Still dealing with the complex reality of our relationship to our own ancestry and to the middle passage.

MR. HALEY: Well, it was, to a lot of folks, uplifting because we had often thought of out African ancestors as savages. And I think what "Roots" did was dispel many of those perceptions. So some folks really took Kunta to heart and others, as we do in our community from time to time, we thrust things in reverse. Where all things that we admire, we put down in a sense.

CHIDEYA: Juliet, where were you when you remember watching "Roots"? how important was it for you?

Ms. WALKER: It was really very important. Because at that time, I was PhD student at the University of Chicago, and I guess I should back up a little. Before seeing the mini series, I had been reading about "Roots" as well as the book as a result of reading Reader's Digest. And what impact it - as I knew about what Alex Haley was writing about - and I was so impressed because what he was doing was to expand our vision of the African American experience. For example, most people think of the history of black people in three segments. 1619, the first Africans were brought to English colonial America.

And so what Alex Haley was, especially with Chicken George, and that was the family member I was most impressed with because my research was on my great, great grandfather, whose name was Free Frank, and he was born in 1777. So there are parallels. Kunta Kinte being brought to America in the 18th century. Free Frank's mother was African-born. And here is a family, and not a family that has historic distinction, but a family that could not read or write, and they lived through the revolutionary war era. But what was most important is that they represented an aspect of African-American history that has been traditionally ignored. And that is that independent, self-help economic activities. Both Chicken George and Free Frank were making money to buy their family - themselves and their family from slavery. And they said…

CHIDEYA: So you have that very personal connection. I want to go back to Bill, though.

CHIDEYA: We don't have too much time left, but I want to throw a couple more things at you. One is that, Bill, your father's work has been examined, and some people say that it's not all fact, that some of it is fiction. One, what's your take on that? And two, even if it is partially fictionalized, does that erode the message that it gave to millions of people, not just in America, but across the world?

Mr. HALEY: No, it doesn't. But "Roots'" first title was "Before This Anger." I don't think many people know that. "Roots" is a work, as dad described it, it's a cold faction. Fact is that you can trace the family lineage back through census documents and whatnot, (unintelligible). Kunta is another issue, and that's one in question. People talk about whether or not there was a (unintelligible), I think it's Harold Courlander, sued dad for plagiarism. And there was $650,000 out of court settlement for three paragraphs, which are about one page of "Roots," in fact, and it was had to do with the naming or manhood ceremony in Africa. Many people say that - was a lot of work, but when you consider "Roots" sold 10 million copies, $650,000 equates to 6.5 cents per book, which was about the contribution that it was valued at.

CHIDEYA: Well, you know, I don't want to go too deep into that because really at this 30th anniversary year, it's the so much focus on looking at how this shaped America. Juliet, we are almost out of time, but do you think "Roots" is something that people need to embrace now and reexamine as a powerful document, both in text and in image?

Dr. WALKER: Absolutely, because I shouldn't say unlike what historians do, it is a book that engages the reader. And you don't want to put it down. And it's something that is easily not - well, it is easily understood. One can relate to it. But most important, one can see the reality of slavery in a way in which historians have really not been able to do. And so you have a whole new generation of Americans that need to revisit the past in the way in which it has been presented to us by Alex Haley. And, in fact, I'm going to be assigning it in my upper division African-American history course in the fall.

CHIDEYA: I'm sure many people will be using this as a reference text. And, Bill Haley, Juliet Walker, I want to thank you so much.

Dr. WALKER: And thank you.

CHIDEYA: Bill Haley is a writer and also the son of Alex Haley. He joined us from WFDD in Winston-Salem, North Carolina. And at the studios of KUT in Austin, Texas, Juliet Walker, history professor at UT Austin.