Accessibility links
Europe's Carbon Trading Market Sees Brisk Business To ease the pain of Europe's mandatory carbon cuts, businesses with low carbon emissions are selling their surplus allowances to businesses with high emissions. This system has grown quickly, and in some unexpected ways. 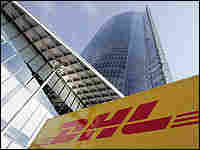 The Group of Eight, a forum of the world's major industrialized countries, meets this week in Germany. High on the G-8 agenda is the issue of carbon dioxide, the main greenhouse gas that warms the planet. European governments have put a cap on how much carbon dioxide industries can put into the atmosphere, and they want to tighten that cap even more in the future.

To ease the pain of all these carbon cuts, Europe has created a carbon market. Businesses that emit less than their quota of carbon dioxide can sell the surplus credits to other businesses that can't live within their quotas.

It's like climate atonement — you get to buy your way out of failure. This carbon market buys time for companies to figure out how they can live within CO2 limits, which will only get tighter over time. This system has grown quickly, and in some unexpected ways.

The shipping company DHL delivers a lot of mail, and it creates a lot of greenhouse gases in doing so. But a new service promises to offset the carbon dioxide emitted in the shipping process — making shipments, in other words, "carbon neutral."

"We have introduced the 'Go Green' product, which allows our customers to send their express shipment carbon neutral from Europe to whatever place in the world," says Martin Wegner, head of technology projects at the DHL Innovation Center. "We are able to track each leg of the transport chain and calculate exact emissions — coming from road transport, then the aviation part, and finally the ground transport to customer in the U.S."

DHL will ship carbon neutral for you — and charge 2 percent more. The company takes that money and invests it in projects that produce carbon offsets.

For one offset project, DHL grows trees in a plantation in Costa Rica. The trees soak up carbon dioxide as they grow. DHL also funds things like a solar energy farm in India. In order to qualify, these projects have to be new — projects that only would have happened with DHL's investment.

The company does this voluntarily; transportation companies aren't covered by the Kyoto climate rules. So why would DHL do it? The answer can be found in the Frankfurt office of carbon broker Anna Lehmann.

"Companies use this to green their image, to wipe out their carbon footprint," says Lehmann, who works at the Carbon Credit Company. Like many carbon entrepreneurs in Europe, they've just rented office space in a semi-industrial neighborhood. The place still smells of fresh paint.

Lehmann's company helped DHL find its offset projects. She says there are plenty more companies looking for a similar deal, and the Carbon Credit Company doubled its business last year.

"It's exploding in Germany right now," she says. "Brokers are now jumping on this. It's quite popular and becoming known. Companies see this option and use this as a marketing tool."

But this voluntary market is like a spring garden, growing without much oversight.

"If there are people out there who try to make fast money, there is indeed the risk," says Martin Enderlin of Ecosecurities, another large carbon dealmaker. "Everybody can call themselves experts on climate change projects."

Enderlin says there's sometimes no way to guarantee that someone who promises to plant a tree or build a solar power project really follows through.

"Has anyone been caught? Who's going to catch them? There is no police, there is no law against investing your money stupidly," Enderlin says. "They don't sell something which is illegal; they just sell something like hot air."

There are actually companies that will verify that carbon-reduction projects do what they promise. But they work mostly in Europe's mandatory carbon market created by the Kyoto treaty. That's where the big power companies and factories that are required to limit their emissions do their offset trading. In two years, this mandatory market has generated about $30 billion in trade.

The carbon marketers say all this action wouldn't have happened without the Kyoto treaty.

"Before CO2 was for free, emitting it was for free. Nobody had really thought about it," says Niklas Hohne at Ecofys, a large carbon trader in Germany. "Now the big companies at a very high level are thinking about it. Banks, too. It's an asset or not if you have emissions [permits]. It's really changed the way companies think about climate change."

At the G-8 summit, there will be a lot of talk about how to bring even more companies into the carbon market and extend it beyond Europe, especially to the United States. So far, many American companies say they're ready for a carbon market. The Bush administration has been cool to the idea.