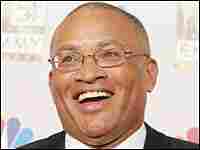 Larry Wilmore, jokingly billed as "Senior Black Correspondent" on The Daily Show with Jon Stewart, worked as a writer on In Living Color and The PJ's before getting his fake-news-show gig.