Accessibility links
And the Biggest Producer of Greenhouse Gases Is … Finding out what single entity produces the most greenhouse gases in the United States is difficult, it turns out. But the government knows which power plant emits the most carbon dioxide.

Listen
And the Biggest Producer of Greenhouse Gases Is … 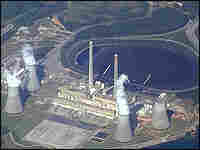 According to the Environmental Protection Agency, the Robert W. Scherer Power Plant near Macon, Ga., emits more carbon dioxide than any other power plant in the United States. Wikipedia.org/Creative Commons hide caption 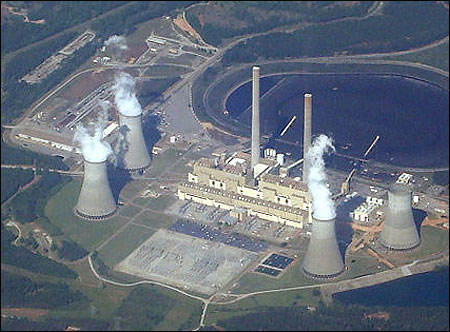 According to the Environmental Protection Agency, the Robert W. Scherer Power Plant near Macon, Ga., emits more carbon dioxide than any other power plant in the United States. 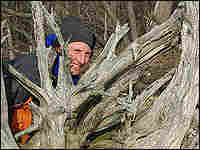 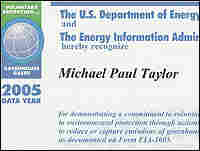 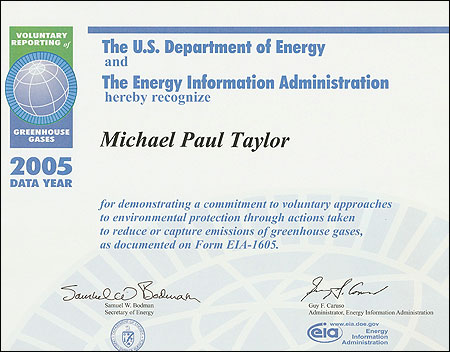 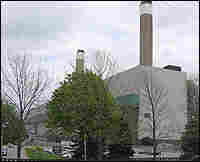 The United States is a big country, and Americans tend to have a fascination with big things. What's the biggest ball of twine, the biggest mountain, the biggest skyscraper? And, what one single thing produces the most greenhouse gases in the United States? It turns out, that question is not so easy to answer.

My quest to find an answer began when I decided that I wanted to go sit somewhere and see massive amounts of greenhouse gases being pumped into the atmosphere. OK, things like carbon dioxide and methane are invisible, but still. I wanted to find the "Big One" — the "Top Dog" for greenhouse gases. So I called the Environmental Protection Agency and asked Dina Kruger, who runs the EPA's climate change division.

As a nation, the EPA says we spew out the equivalent of around 10 billion metric tons of carbon dioxide. But that's everything from cars to landfills to power plants. If you want to get down to the nitty-gritty and find the biggest single emitter, it's difficult. The government doesn't require facilities to report their emissions.

The government does offer some options for companies that want to do that. One program, called Voluntary Reporting of Greenhouse Gases, brought me to Mike Taylor's lovely front porch in Mount Rainier, Md.

Taylor is interested in energy issues. A few years back, he heard about this voluntary program from a friend, who suggested that they report their emissions to the government.

It was sort of a joke.

"Everyone said, 'Oh, ha-ha, that would be funny.' I don't think [my friend] ever did, but I decided to," Taylor recalls.

Today, if you look in the database, you'll find information on Mike Taylor's paltry emissions from his car and house. You'll also find reports from several hundred major companies.

There's also a furniture store in Nebraska on the list, and a laundry in North Carolina. But experts say this voluntary reporting system is useless for my quest.

"Supposing you wanted to find out who the biggest emitters were, who the best players in a sector were," Pershing says, "this data, by virtue of both being incomplete and voluntary in terms of what you report, is not likely to give it to you."

Some lawmakers think we need a mandatory system. Sen. Amy Klobuchar (D-MN) met with me in her office on Capitol Hill. She says, if we're ever going to limit greenhouse gas emissions, we need to know exactly who is emitting what. And right now, she says, that's not happening. But Klobuchar says 31 states are now calling for a national carbon registry.

She and Sen. Olympia Snowe, a Republican from Maine, have introduced a new bill to create that kind of national registry. It would require facilities to report their emissions, using the same system that is already in place for many pollutants.

If that proposal becomes law, the United States will become a lot more like its northern neighbor. Canada requires all of its biggest emitters to report.

Charles Elliott works near Ottawa for Environment Canada, a government agency. He says all the information is publicly available on a handy Web site. So, let's say you wanted to know which cement factory in Canada spews the most greenhouse gases.

That would be St Mary's Cement in Bowmanville, Elliott says after the tapping of a few keys. The company reported close to 1.5 megatons of greenhouse gas emissions.

And if you want to know the biggest emitter of greenhouse gases in Canada, Elliott can say for sure: "That would be the Nanticoke Power Generation Facility, which is an electricity plant that's here in the province of Ontario."

I drove down to see it. When you're standing right next to it, it doesn't look all that impressive. There are some big power lines, but otherwise it looks just like any factory by a lake. The smokestacks don't seem to be emitting anything. But in reality, the equivalent of around 17 million tons of greenhouse gases comes out of them every year.

"It certainly is educational for people, I think, to have this data available to them. Otherwise you'd just drive by it and just say, 'Oh, that's a coal power plant,'" Elliott says.

He adds that Canada isn't collecting all this information just for kicks. It's the first step toward restricting emissions; Canada announced this spring that it plans to set tough new limits for industrial emitters. But Elliott says the public also is just interested in knowing what's what.

Tom Natan, at the National Environmental Trust, says that in the past, public disclosure has been a powerful force in getting businesses to reduce air pollution.

"There's enormous pressure, when you know you're in the top 10 or the top 100 in the country, not to be in that top group anymore," Natan says.

It turns out that under an old provision of the Clean Air Act, power plants do have to tell the government about their releases of one greenhouse gas — carbon dioxide. And the EPA says that for the past three years, the company at the top of that list has been the Robert W. Scherer Power Plant near Macon, Ga.