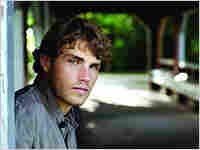 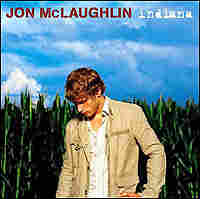 The cornfield on the cover of Jon McLaughlin's new CD is a salute to his native Indiana. Photo: Warren Darius Afshin hide caption

Songs from the New CD

Jon McLaughlin muses on the music industry and the Midwest

"Just Give it Time"

In high school McLaughlin was impressed with the music of Ben Folds, especially the song "Brick."

The cover of the new CD by Jon McLaughlin pictures him standing in a field of corn. It's a tribute to the 24-year-old pianist and singer-songwriter's Midwestern roots. The new album is titled "Indiana," and in many ways it charts the rise to major label success of the Anderson, Ind., native, whose music was discovered on the Web by an industry talent scout.

McLaughlin started playing piano as a child. But unlike many youngsters who give it up after a few years of lessons, he kept at it. McLaughlin began writing and singing his own songs, while he worked toward a degree studying the music business at Anderson University.

That's when he was contacted by a talent scout from Island Records.

"It's one of those totally random right-place-at-the-right-time kinds of stories," McLaughlin admits. "She discovered the music on the Internet, and waited it out. She knew I was in college, and I just randomly came up to New York to play some shows after I graduated, and she was up there and got in touch, and here we are."

Not every aspect of landing a major label debut was that simple. McLaughlin was used to writing songs on his own, but for Indiana, Island executives insisted that he collaborate with some of their veteran songwriters.

"At first I said no," McLaughlin recalls, "And then I came to my senses and realized it's a great opportunity. There are some amazing writers out there, and I was happy to have a chance to work with them, but there were some growing pains."

In an era filled with plenty of jangley guitar-based bands, McLaughlin's piano-centric music is distinctive.

"Overall, it's definitely more of a rarity to have a piano player be the front man, and sonically and stylistically have everything built around the piano," McLaughlin says.

Now that he has tasted success in the music industry, McLaughlin has his sights set on the film industry. His music can be heard in the movies Georgia Rule and Bridge to Tarabithia, and this fall he'll make his screen debut in the Disney film Enchanted.