Accessibility links
Graham: Iraq Report Prompted 'No' Vote on War The war in Iraq has been the focus of Democratic and Republican presidential debates, as the candidates were asked what they knew in 2003. Former Sen. Bob Graham, who was chairman of the Intelligence Committee, said a U.S. intelligence report moved him to vote against the invasion. 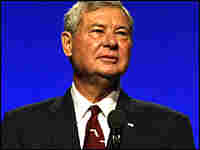 The war in Iraq is the most important issue for primary voters in 2008, according to recent polling by the Pew Research Center. Iraq was the focus of Democratic and Republican presidential debates this week — along with a question: What did the candidates know in 2003?

At both debates, CNN's Wolf Blitzer asked the candidates whether they read the National Intelligence Estimate on Iraq in 2003. A new book about Sen. Hillary Clinton says she did not read the NIE, a document so highly classified that even her senior staff did not have access to it at the time.

Blitzer asked Clinton on Sunday whether she regretted not having read it.

"Wolf, I was thoroughly briefed," Clinton said. "I knew all the arguments. I knew all of what the Defense Department, the CIA, the State Department were all saying. And I sought dissenting opinions, as well as talking to people in previous administrations and outside experts."

At Tuesday night's Republican debate, both John McCain and Sam Brownback said they had not read it, either.

But former Florida Sen. Bob Graham, who chaired the Intelligence committee at the time, has said he read the NIE. And Graham says that not only did he read it — it is what moved him to vote against authorizing Bush to invade Iraq. 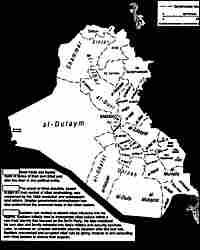 A map of the tribal and sectarian divisions in Iraq, from page 77 of the intelligence report. hide caption 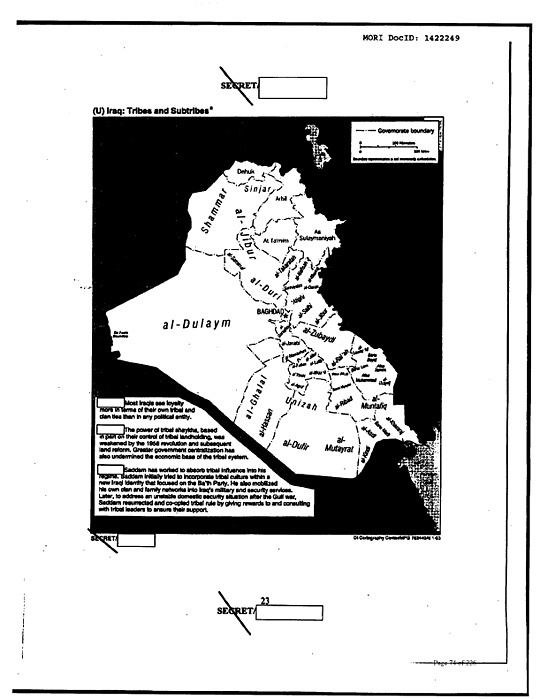 A map of the tribal and sectarian divisions in Iraq, from page 77 of the intelligence report.

U.S. spy agencies' predictions about post-war Iraq were mostly accurate, according to a new Senate Intelligence Committee report. But several Republican senators object to conclusions in the report on pre-war intelligence assessments.

Senators and their staff considered a number of documents and previous investigations. But they relied most heavily on two papers from the National Intelligence Council — both of them previously classified — dated January 2003.

The papers looked at what the main challenges would be in a post-Saddam Iraq, and at the regional consequences of a war.

Their judgments were mostly on the mark: The authors warned about the danger of sectarian violence and said al-Qaida and Iran would try to exploit the situation.

The report was approved by a vote of 10-5, with two Republicans — Olympia Snowe of Maine and Chuck Hagel of Nebraska — crossing over to vote with the Democrats.

The five Republicans who voted against the report have a number of issues with it.

On one front, they say the report's conclusions only highlight issues that seem important to those looking at Iraq now — a prism that they say distorts the picture that was presented to policymakers at the time.

The dissenters were also angry that a large chunk of the report — 81 pages — contains names of people to whom the two National Intelligence Council reports were distributed.

While many of the names are blacked out, a good number of them are not.

Scooter Libby and Stephen Hadley at the White House are among names on the first page. The authors, it can be assumed, included the names for the sake of accountability, to show who had access to the warnings.

Republicans pointed out that just because the reports were sent out doesn't mean everyone on the list received them. Some people might have been on leave, for example, and may never have seen the documents. The list, they said, sets a bad precedent.

The Senate panel has yet to produce its findings on a central question: whether the intelligence on Iraq was hyped by senior Bush administration officials to make the case for war.