Accessibility links
Excerpt: 'At Large and At Small' At Large and At Small is "fun enough for the beach, sweet enough for bedtime reading, [and] intellectually stimulating enough for serious readers," says bookseller Lucia Silva. This collection of "familiar essays" runs the gamut — spanning topics from the origins of the postage stamp to Arctic exploration.

Excerpt: 'At Large and At Small'

Excerpt: 'At Large and At Small' 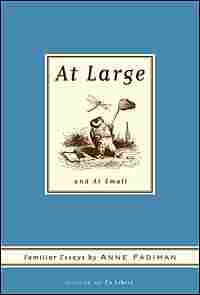 'Booksellers' Picks for the Beach — or the Backyard'

At Large and At Small

The net was green. The handle was wood, and the grip was uncomfortably thick, like that of a tennis racket borrowed from an older player. The mesh bag was long enough that if we caught a tiger swallowtail — or a spicebush swallowtail, or a mourning cloak, or a European cabbage, or a common sulphur, or a red admiral, or a painted lady, or a monarch, or a viceroy — we could, with a twist of the wrist, flip its tapered tip over the wire rim and trap the butterfly inside.

Then, being careful not to scrape off the colored scales, we pinched the wings shut and transferred the butterfly to the killing jar. (Our bible, A Field Guide to the Butterflies of North America, East of the Great Plains, by Alexander B. Klots, recommended a more complicated method of transfer that involved holding the handle between one's thighs, grasping the bag just below the butterfly, slipping the jar into the net, and coaxing the butterfly into the jar. But this technique demanded a prodigious level of coordination—on the order, say, of that displayed by the Cat in the Hat when he balanced a goldfish bowl on an umbrella while standing on a rubber ball—and we were never able to master it.) My brother and I had started with a shallow plastic container, like a petri dish, which came in the children's butterfly kit that we had rapidly outgrown, but because the hindwing projections of the swallowtails tended to get crushed against the perimeter, we graduated to a large glass jar from which our mother had scrubbed the last traces of strawberry jam. At the bottom of the killing jar was a piece of cotton saturated with carbon tetrachloride.

"Carbon tet," we called it, not because it was easier to pronounce—we shared a weakness for long words—but because the nickname suggested that we and it were on familiar terms, as was indeed the case. Thirty years later, a friend of mine dabbed some spot remover on a sofa, and I instantly recognized the smell of the killing jar. During the fifties, when my brother and I started chasing butterflies, potassium cyanide was still in use as well, but because it is a deadly poison, Professor Klots recommended liquid carbon tetrachloride, which is "not very poisonous unless inhaled deeply," and which we persuaded our parents was as innocuous as smelling salts. The butterfly would flutter for a few moments, sink to the bottom of the jar, and slowly expire.

The murder was less grisly than it would have been in, say, 1810, when insect collectors stabbed their specimens with pins, asphyxiated them over the flames of sulphur matches, and skewered them with red-hot wires. Around 1820, the vogue in Europe was the "stifling box," a sealed container submerged in boiling water. The killing jar was introduced in the 1850s, after the royal physician used chloroform to ease the delivery of Queen Victoria's eighth child, and net-wielding country vicars across Great Britain realized they could amass their collections of marbled whites and Camberwell beauties without overt violence. They could simply anesthetize their specimens to death.

The problem with chloroform, as with potassium cyanide and carbon tetrachloride, is that these poisons freeze the butterfly's muscles into an extreme version of rigor mortis, and the wings cannot be spread. My brother and I therefore popped the corpse into a "relaxing jar" — now there's a euphemism right up there with Orwell's Ministry of Peace — that dampened it into pliancy, whereupon it could be pinned to the spreading board, a balsa rectangle with a groove down the center that allowed the wings to be flattened without squashing the thorax and abdomen. Caught, killed, relaxed, and spread, the butterfly was laid to rest in a Riker mount, a shallow glass-topped box filled with absorbent cotton — a sort of mass grave for soldiers who had given their lives on the battlefields of suburban Connecticut.

When did we realize that this was horrible? My brother, Kim, and I had started collecting butterflies when he was eight and I was six. Shame set in about two years later. I remember a period of painful overlap, when the light of decency was dawning but the lure of sin was still irresistible. Like alcohol, nicotine, or heroin, lepidoptery is hard to renounce. A tiger swallowtail is an unbelievable thing to find in your backyard: a big butterfly, five inches across, striated with yellow and black, with blue splotches on the hindwings rendered iridescent by light-diffracting scales—"like the colors," wrote Professor Klots in a memorably lyrical passage, "produced by a glass prism, the blue of the sky, the spectrum of the rainbow, and an oil film on water." Who would not wish to take such a creature home? To glimpse something so gaudily tropical, more like a quetzal than a sparrow, on your own home ground; to pursue it across the lawn, down the stone steps, around the two topiary peacocks that stood guard over the wading pool, and along the flower border, until it lit on a phlox or a zinnia; to swoop your net through the air and see something fluttering inside; to snatch that bit of life from the rich chaos of nature into your own comparatively lackluster world, which it instantly brightened and enlarged; to look it up in Klots and name it and know it — well, after you did that a few times, it was hard to muster much enthusiasm for Parcheesi.