Listen
G-8 Leaders Reach Accord on Approach to Climate 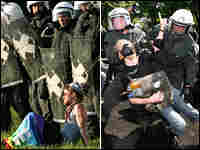 At left, German riot police stand over a demonstrator in a lull during clashes between police and anti-G8 activists at Bollhagen, Germany. At right, the scene earlier. Sean Gallup/Alexander Hassenstein/Getty Images hide caption 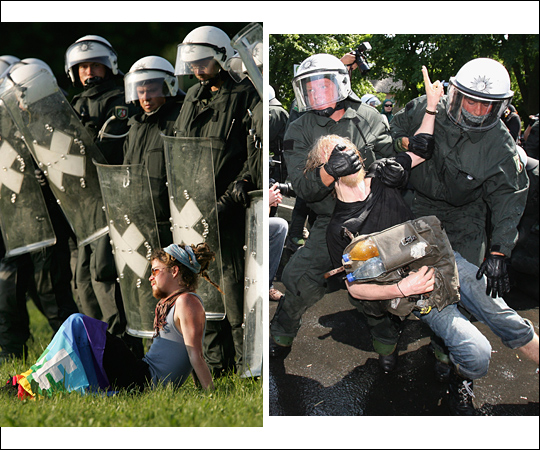 At left, German riot police stand over a demonstrator in a lull during clashes between police and anti-G8 activists at Bollhagen, Germany. At right, the scene earlier.

The goal falls short of the specific goal German Chancellor Angela Merkel and other European leaders wanted. Europe, Japan and Canada pushed for a tangible target, an agreement that by the middle of this century global levels of greenhouse gasses would be reduced to half their 1990 levels.

That number is in the G-8 leaders' statement, not as a firm commitment, but as something to seriously consider when setting emission reduction goals in the next couple of years.

Many of the thousands of protestors who gathered outside the summit say that because issues like climate change and HIV/AIDS are so big, it is wrong that a small group of powerful leaders essentially set the agenda for the rest of the world.

But there is also another line of thinking among the activists, to get the G8 countries to make specific promises and stick to them. At a workshop on AIDS at an alternative G-8 summit in nearby Rostock panel members said they want the G-8 to make good on the pledges made at earlier sessions.

There is a particular focus on that this year, as the G-8 leaders look back to commitments they've made to help African nations, including one seemingly impossible goal: ensuring access to HIV/AIDS treatment for the millions of people in developing countries who need it, within three years from now.

Friday, the G-8 leaders will sit down with the heads of Egypt, Algeria, Senegal, Ghana and Nigeria. Thursday, Germany's Merkel said it has not been easy to even get Africa so high on the agenda.