Accessibility links
Bono Presses G-8 Leaders on Africa Aid U2 lead singer Bono campaigns on the sidelines of this week's G-8 meeting, using his celebrity status to pressure world leaders to stick to their promises to give billions in aid to Africa. 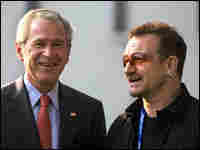 President Bush (left) was among several world leaders that Bono lobbied on the sidelines of the Group of Eight summit in Heiligendamm, Germany. Mandel Ngan/AFP/Getty Images hide caption 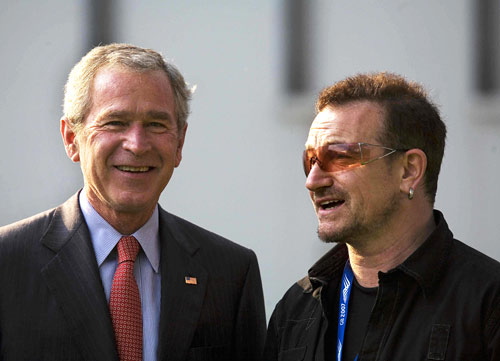 President Bush (left) was among several world leaders that Bono lobbied on the sidelines of the Group of Eight summit in Heiligendamm, Germany. 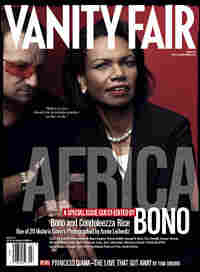 Bono was the guest editor for Vanity Fair's July issue on Africa. It features 20 different covers, including this one with the singer and Secretary of State Condoleezza Rice. Annie Leibovitz for Vanity Fair hide caption 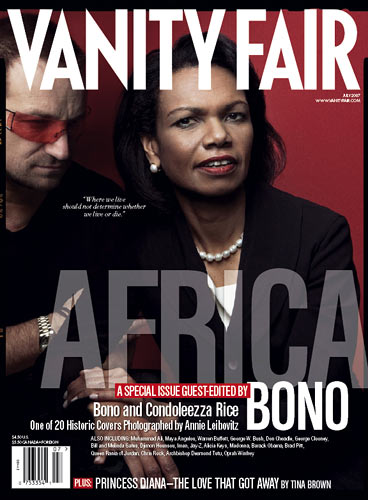 Bono was the guest editor for Vanity Fair's July issue on Africa. It features 20 different covers, including this one with the singer and Secretary of State Condoleezza Rice.

A world leader of another kind attended the Group of Eight summit in Germany this week.

Bono, the lead singer of U2 has crusaded for Western nations to forgive their loans to Africa. He recently guest edited an Africa issue of Vanity Fair magazine. And at this week's summit, Bono campaigned for more, including getting leaders to stick to their promises to give billions of dollars in aid to the continent.

"We'll meet with anybody, any of the G-8 leaders that want to talk to us, and it's not really about meeting myself or [activist musician] Bob Geldof or somebody like that," Bono tells Steve Inskeep. "There's a sort of movement that we represent."

Oh, come on, it's sometimes about meeting you.

Oh yes, I think actually that's probably how we begin these relationships. You're some sort of curiosity for people or maybe their staff and that's how maybe you enter the office. But people don't let you take up their time at a G-8 just for a photo op, and it's because we know what we're talking about and we're very well versed in these issues.

Well, I am looking at my newspaper here, and here's a picture of you standing next to President Bush. What did you guys talk about?

We talked about how difficult it's going to be get these leaders to keep their promises that they made to the world's poorest and most vulnerable people. It was a promise to double aid to Africa, $25 billion increase of aid to Africa, $50 billion globally by 2010.

Can I ask if you've had a meeting with any leader at this summit that you feel is not keeping a promise there?

Well, we met with the Italian prime minister, Romano Prodi, and to be fair to the situation, the United States underpromised and has overdelivered; Italy overpromised and is really underdelivering. And it was a very, very tense meeting and we weren't sure we were going to get anything. We got up to leave and they said, 'Stop, just please wait,' and we said, 'We've got to go to meet the president of France,' and they said, 'Please, please wait and we think we have something.' They disappeared around the corner, came back with a proposal which may turn Italy around.

Now, you may think that's absurd. You know, what does an Irish musician have anything to do with that? But actually, they're not afraid of me; they are afraid of our audience. And they're afraid of this movement that I'm trying to tell you about. And that's not about a photo op; that's about a man putting his credibility on the line with the Italian public. And I think we might have got some movement. We then had to explain to the president of France why we were late; we just said, oh, it's the Italians – (laughter).

And he was fine with that, I'm sure.

And he just, you know, he rolled his eyes and smiled. And then we got into hammering France. We're hammers here.

Just to understand how you believe this works: Are you saying that you think you have power because there are people in Italy who know who you are, maybe like your music, and would be unhappy if you told the world that Italy was not keeping its promises?

Of course we have power. You know that — you don't have to ask me that question. We don't have political power, but people who like our music vote. I mean, it's just that simple.

Now, one of the ways, of course, that you are communicating with Americans at the moment is as a guest editor for an issue of Vanity Fair. You sent writers all over the continent and it was interesting, because you've appealed for help for Africa, that you seem determined to highlight some good things that were happening in Africa. How does that fit in with appeals for help?

As annoying as I know can be going on and on about the ridiculous issues of huge obstacles in the way of everyday Africans, those Africans, particularly middle class, find it very difficult that we consistently portray them as a sort of basket case. And when we do, we fail them. And we do have to do better at getting this across. And I went to Graydon Carter and – because his magazine –

The full-time editor of Vanity Fair.

Great storytelling. Vanity Fair has got some great, great, gifted writers and photographers and I said we want to do an Africa issue, but we want to portray Africa as opportunity and adventure and not just the usual white man's burden. And he agreed on that basis and actually it's probably the only thing I've done that all Africans seem to like – (chuckles) – even the middle-class Africans that find me going on about the emergencies sometimes quite difficult to take.

One last thing: I asked a lot of people what they wanted to know from you before this interview and there were a number of serious questions that were thrown out and then people would say, what's up with the colored glasses, why does he do that?

(Chuckles.) The colored glasses — that's very good. I have very sensitive eyes, and I find myself with people with their face in mine more than I'd like or cameras in mine more than I like, and there was a – I think it was a story in Q magazine – because I don't wear my glasses when I'm in bed, despite what you might think, but somebody spent some time with me and gave me the nickname of Old Red Eyes. (Laughter.) So I'm a vain pop star, what can I tell you?

Leaders of the Group of Eight met with African heads of state on their summit's concluding day Friday, agreeing on a $60 billion package to fight disease in the continent as diplomats worked on a possible deal with Russia over Kosovo's future.

The leaders held their joint session in the Baltic Sea resort of Heiligendamm, Germany, without President Bush, who was ill and stayed in his room after meeting privately with French President Nicolas Sarkozy.

The others, chaired by German Chancellor Angela Merkel, met with the presidents of Egypt, Algeria, Senegal, Ghana, and Nigeria. Earlier, Germany's development minister said in Berlin that G-8 leaders had approved earmarking an additional $60 billion to fight the spread of AIDS, tuberculosis and malaria.

Anti-poverty activists complain that the world's richer countries have not kept the promises the G-8 made to increase annual aid to poor countries by $50 billion at the Gleneagles summit in Scotland in 2005.

This week, G-8 leaders agreed to earmark $60 billion to fight AIDS, tuberculosis and malaria in Africa, Germany's development minister said earlier in Berlin. About half was pledged earlier by the U.S., and other nations will contribute the rest, minister Heidemarie Wieczorek-Zeul said.

"It was a very candid and open discussion," Merkel said afterward. "We said that on behalf of the countries of the G-8, that we are aware of our obligations and we would like to fulfill the promises that we entered into and we are going to do that."

But the anti-poverty group Oxfam noted that only a fraction of the funds promised to fight disease represented new aid since the figure was spread over an unspecified number of years and includes money already promised.

"The new money announced today is important in the fight against HIV/AIDS and to provide education for all, but it should be seen for what it is: a small step when we need giant leaps," the group said in a statement.

Sarkozy said he and Bush discussed the Serbian province of Kosovo - and that the leaders would talk more about the subject Friday. He said their deputies worked late into the night to find agreement on the province's future.

The United States and the European Union back a U.N. resolution to give the predominantly ethnic Albanian province supervised independence. Kosovo has been under U.N. supervision since a NATO-led air war in 1999 to halt a Serbian crackdown on ethnic Albanian separatists.

Serbia, however, considers Kosovo its historic heartland, and has resisted ceding the province. The Russians, Serbia's traditional ally, say they oppose any solution imposed over Belgrade's objections.

Sarkozy has proposed imposing a six-month wait on the resolution, during which Belgrade and the Kosovo Albanians would hold further talks. If they reach no agreement, the U.N. plan would then take effect.