Accessibility links
Admittance to a Better Life In his younger days, Michael Oatman was educated on the streets and in bars and strip clubs. Now, the Ohio writer believes the education he's getting in college classrooms has opened doors to a better life.

Listen
Admittance to a Better Life 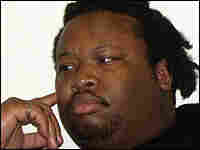 Michael Oatman is a playwright, producer and director living in Cleveland. He has been a newspaper reporter and columnist as well as a child-care worker with at-risk youths. Oatman will receive his Master of Fine Arts degree from Cleveland State University this summer. hide caption

I believe that education has the power to transform a person's life.

For me, education was the rabbit hole through which I escaped the underclass. I squeezed my 300-pound frame through that hole expecting others to follow, and instead I find myself in a strange new land, mostly alone, and wondering at this new life.

For instance, these days for me, dramatic plays at local arts centers have replaced strip pole dancing at the local sleaze huts. I haven't fondled a stripper in years because now I see the stripper through eyes informed by feminist theory. It's hard to get excited when you're pondering issues of exploitation.

I still wonder what happened to that happy-go-lucky semi-thug who used to hang out with drug dealers on dimly-lit street corners. Well, I'm in the library parsing a Jane Austen novel looking for dramatic irony, while many of my old friends are dead or in jail.

I was lucky because I didn't get caught or killed doing something stupid. When I was on the streets, I never felt I was good at anything, but I wrote this poem about a girl who didn't care about me, and it got published. I knew nothing about grammar or syntax, so I went back to school to learn that stuff, and one thing led to another.

It's odd to educate oneself away from one's past. As an African-American male, I now find myself in a foreign world. Like steam off of a concrete sidewalk, my street cred is evaporating away, but I don't fight it anymore. Letting go of the survival tools I needed on the street was a necessary transaction for admittance to a better life.

I am still fighting, but in different ways. I've learned the benefit of research and reading, of debate and listening. My new battlefields are affirmative action, illegal immigration and institutional racism.

I believe I am the living embodiment of the power of education to change a man. One day soon, a crop of fresh-faced college students will call me professor. I may even be the only black face in the room, the only representative of the underclass. I may feel the slight sting of isolation, but I'll fight it off because I believe in the changes that my education has allowed me to make.