Accessibility links
Ocean's Crew Gets Lucky Again with 'Thirteen' George Clooney and the gang return to Vegas and to the casino caper for this third installment in Steven Soderbergh's hit franchise. David Edelstein has a review. 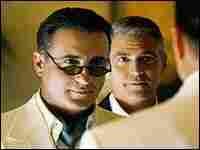 George Clooney and the gang return to Vegas and to the casino caper for this third installment in Steven Soderbergh's hit franchise.

While Ocean's Twelve was all over the place, this one's as elegant and streamlined as hero Danny Ocean. As the plotting gets knottier, Soderbergh's technique gets more fluid — the editing jazzier, the colors more luscious, the whip-pans more whiz-bang.

It's all anchored by Clooney, looking impudent, roguish, laughably handsome: The character — the whole movie — seems to emanate from his well-known real-life penchant for practical jokes.

Ocean's Thirteen is such an exhilarating ride that it made me wonder if Soderbergh, after deconstructing every lustrous image in The Good German, was liberated by making a con-artist comedy in Vegas. The city, after all, is a monument to con artistry; every surface is a lie. Ocean's Thirteen has so many layers of deception, it's practically deep.