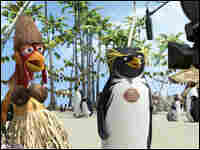 Chicken Joe and Cody do the talking-head thing in Surf's Up. Sony Pictures hide caption 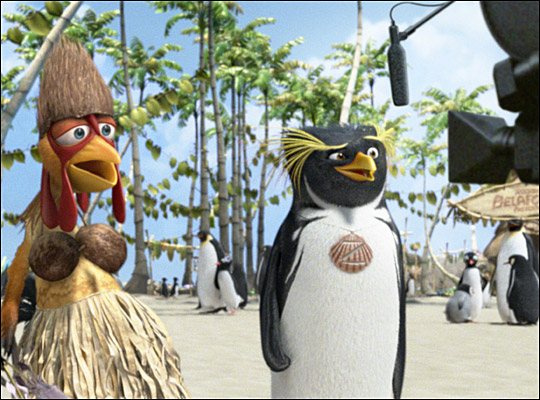 Chicken Joe and Cody do the talking-head thing in Surf's Up.

Penguins have been having a good couple of years at the cineplex: They became celebrities in March of the Penguins, they tap-danced in Happy Feet, and starting today they'll be riding the waves in Surf's Up. So while you'd be excused for feeling a bit penguined out, bear with me for a moment: In a "normal" movie about animated penguins — surfing, in Hawaii, at the Penguin World Surfing Competition — you'd expect to see what? A tropical paradise teeming with wave-riding, high-fiving penguins, right?

What you might not expect is an animated camera crew "filming" the sort of mockumentary Christopher Guest has made a specialty of. Imagine a penguinized Waiting for Guffman, complete with a cast of deeply committed eccentrics — Chicken Joe, for instance, a surfer dude who is vague enough about the world to feel pampered when some penguin cannibals toss him and some vegetables into what he assumes is a hot tub. Their adventures, and their interviews, are all captured in documentary-style handheld camerawork — which is tricky, since there's no camera involved in digital animation.

And the movie-making jokes don't stop there. The boom mike keeps slipping into the frame. There are animated Super 8 family movies. Jokes about documentaries, surfer movies and even penguin movies, now that they're becoming a genre. And because the filmmakers recorded the actors' voices together, rather than in isolation as in most animated movies, the characters ad-lib like they do in other mockumentaries. Shia LaBeouf as Cody and Jeff Bridges as Big Zeke, for instance, sit down with a big log, set about trying to release its inner surfboard — and away they riff.

Along with the easygoing dialogue comes a relaxed message: that having fun is more important than winning. This comedy is PG-gentle, and sweet, and laid-back like no kid flick I can think of. Surf's Up even feels relaxed in the way it uses computer animation; it's not trying to go all National Geographic on you. Cody & Co. just want to make you feel at one with the wave, inside a perfect curl, warmed by the light of a perfect sunset, with a penguin hanging ... six?