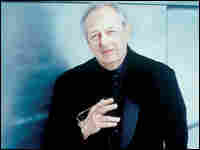 'Bewitched Bothered and Bewildered' (comp. Rodgers and Hart) from Alone (2007)

Andre Previn is a musical polymath. He has been a composer, conductor, pianist and a pedagogue. He has led most of the world's major orchestras, won Oscars for his movie music, written for Broadway and concert and opera halls, and has been knighted by the Queen of England.

Previn started playing jazz as a teenager, having studied classical piano for many of his young years. In the early 1950s, he was blown away by the bebop of Dizzy Gillespie and Charlie Parker. By 1954, he was performing with some of those bebop masters.

In 1956, Previn made his own jazz history. Along with drummer Shelley Manne and bass player Leroy Vinegar, he recorded the first jazz version of a Broadway score for My Fair Lady. It was the first jazz album to sell one million copies.

After decades spent conducting symphony orchestras and composing classical music, Previn has returned to jazz and recorded a solo album — his first in 10 years.

Before he started playing showtunes, he watched them at the movies. As a 10-year-old in Los Angeles, he'd buy 10-cent tickets at Graumann's Chinese Theatre in Hollywood. Six years later, he was working in films, arranging and composing music for some of the great musicals — Gigi, Kiss Me Kate and Silk Stockings.

Andre Previn once wrote about the classical concerts he has conducted with some of the finest Western musicians: "I've had the healthy and sobering experience of constantly working with music that is invariably better than any performance of it can be."

Demanding and no doubt a perfectionist, Previn's latest performance is on the new solo jazz piano CD, Alone.