Accessibility links
Got a Question? Ask a Ninja The creators of "Ask a Ninja," a series of videos with millions of viewers on the Internet, hope to turn their recent Web awards into financial success. The series features a masked character delivering advice — with a humorous twist.

Listen
Got a Question? Ask a Ninja 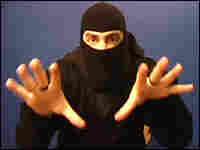 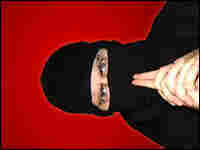 YouTube has brought a new kind of stardom to millions of aspiring actors and artists. The Web is alight with comedy skits and bits of video drama that become wildly popular one day, and then disappear the next. Many of them are made by amateurs who are happy to stay that way.

But others are serious actors, singers or producers who hope to use the Web to launch themselves into mainstream success. Few make it, but Ask a Ninja hopes to be one of them.

If you've missed it, you haven't been spending enough time online. Ask a Ninja videos are viewed half a million times within two weeks of their release. The creators, Douglas Sarine and Kent Nichols, won a Webby special achievement award last week. Ask a Ninja was voted the best series of 2006 at the YouTube video awards.

But it's just two guys with a video camera in an apartment, and it looks it. The production values are low and the costumes are cheap. But the material — rapid-fire monologues delivered by a ninja-mask-wearing character — is often side-splittingly funny.

Nichols says they have a plan to make it big, and they're already making money. The site is free for viewers. It's supported by advertising, and by a "Ninja Mart" store hawking T-shirts, hats and ringtones.